People are complaining about us using a 6 bar with the vertical intakes for our robot. They say it is a bad idea and that we should just not compete with it. Is it a good idea? we will be able to stack all but the high tower and can stack 4 cubes.

6-Bars are known to be extremely janky and low-quality, although that is only a stereotype. I personally don’t like them due to the difficulty of bracing it and the risk of tipping, and if you are going that big you may as well do a dr4b. That’s not to say they can’t be effective if built correctly, but they are more often than not built poorly.

TL,DR: Not really, a dr4b would be better, but can still be okay.

Just because other people don’t use it doesn’t mean it’s a bad idea. As long as you practice with it, you can go pretty far. Take 7k’s bot last year for example. They had a single catapult that loaded from the back. Most teams when given just the bot to judge (at least during late season) would have said it was bad, and yet 7k dominated with it and won Create. One of my former coaches favorite sayings was “a bad robot with practice is just as good as a good robot without.” You may want to switch designs later in the season, but for now, just practice a lot and you’ll do fine.

We will switch to tray bot after these 2 competitions. We will have a 2 week break to finish the tray bot

Please explain a little more about your design…from the little bit you have said it may be very similar to mine…I may be able to provide some pointers if you want. 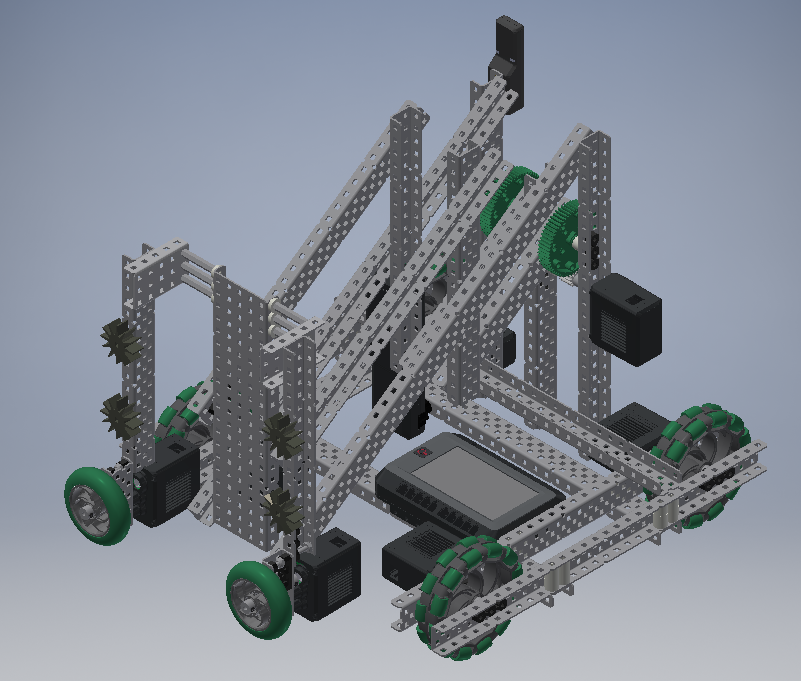 We are using chain instead of tires, different gears and different wheels. We also replaced the intake stacker itself. This is sort of the idea…

Fairly similar to what i have. I used vertical chain with rubber flaps along the length of the vertical channels. It depends of the competitiveness of your region and I will admit SD is not particularly competitive, but I won the first tourney of the year with this bot, with a 7 cube traybot. I think this design will be effective as long as complex trays and so called “usagi” bots do not become too good and popular.

I don’t know exactly what you mean by a back fold. I didn’t really do much stacking unless my alliance couldnt, I mostly stuck to towers. But, if you can make it efficient with both then you should have a decent design.

I’d say, like I did before, depends on what you’re going for. If you’re going for tournament champion, I don’t think this is the way to go, designs have moved past this, and have been there for a while now. But if you’re going for design, this could be a unique way to catch their attention. An idea I’m going to throw out there is if you could make it a dual cube intake, one that intakes two cubes at once, that could really attract judges attention

We will try to make that. Great idea

once we get qualified, then we do serious rebuild

If you have spare people or time (which tbh it sounds like you don’t based on earlier posts) you might want to start that serious rebuild now. Just so you’re not scrambling to build a serious tournament bot later in the season.

We will have 2 weeks of no competitions. We can do that then

Trust me, you will still be scrambling with only two weeks. I’ve told myself two weeks is enough to rebuild so many times and every time it doesn’t work.

We have most of the tray bot still intact.

Ok in that case you might be able to pull it off. But if you get time, don’t procrastinate the rebuild.

Ok will do. … Again thank you very much

I’m working on a tray lift to be used in late December and January tournaments right now.
Dont wait, do it now. Time is of the essence. You cant forget testing.