Is it a good Idea to use a scissor lift as a cap point lifter?

I’m building my robot and would it be a good idea to use a scissor lift to place the red and blue caps on the post?

It depends on your style. Undoubtedly, the definition of “good” needs clarified. Will it work? Yes. Will it be the “best” design? Well…

Consider that scissor lifts are rare, and then try to consider what the reason for that might be. I’m not telling you to not do a scissor lift, but there is a reason they’re rare.

Edit: also, why are you building your robot or redesigning it just now, before Worlds? (Or the last couple of State/Regional competitions) Is it for US Open as a non-Vex team or something?

I’m building it now so I can get it out of the way, and I also have nothing to do in my club nobody shows up

The reason why they are so rare is that they are inherently very difficult to try to make one because you have to have all the points be the same “tightness” and there are multiple ways to make one. I’ve tried to make one multiple times over the years but haven’t yet made one of sufficient usability. I would there has been many good examples over the years that have though so you could look at their matches/ reveals for inspiration. I’m actually making a scissorlift as a small off season project.

well, if you are intent on getting caps on posts, I personally wouldn’t use a scissor lift.

That was my design at the start of the season

I got the Create Award at the state competition with my scissor lift. I was going to Design, but our performance in matches was very poor due to disconnections and brain ports dying. Having a claw on top of a scissor lift requires a very long custom-length cable, and these tend to burn out brain ports very quickly. My team killed about 7 ports in as many days. I have attached videos of my robot (now disassembled). The one where it flips the cap is very near to its final form.

Edit: I was using one V5 motor, and I think it had a 200 rpm cartridge. I ended up with a 1:21 gear ratio because I didn’t have time to fine tune it. I also have attached some pictures. 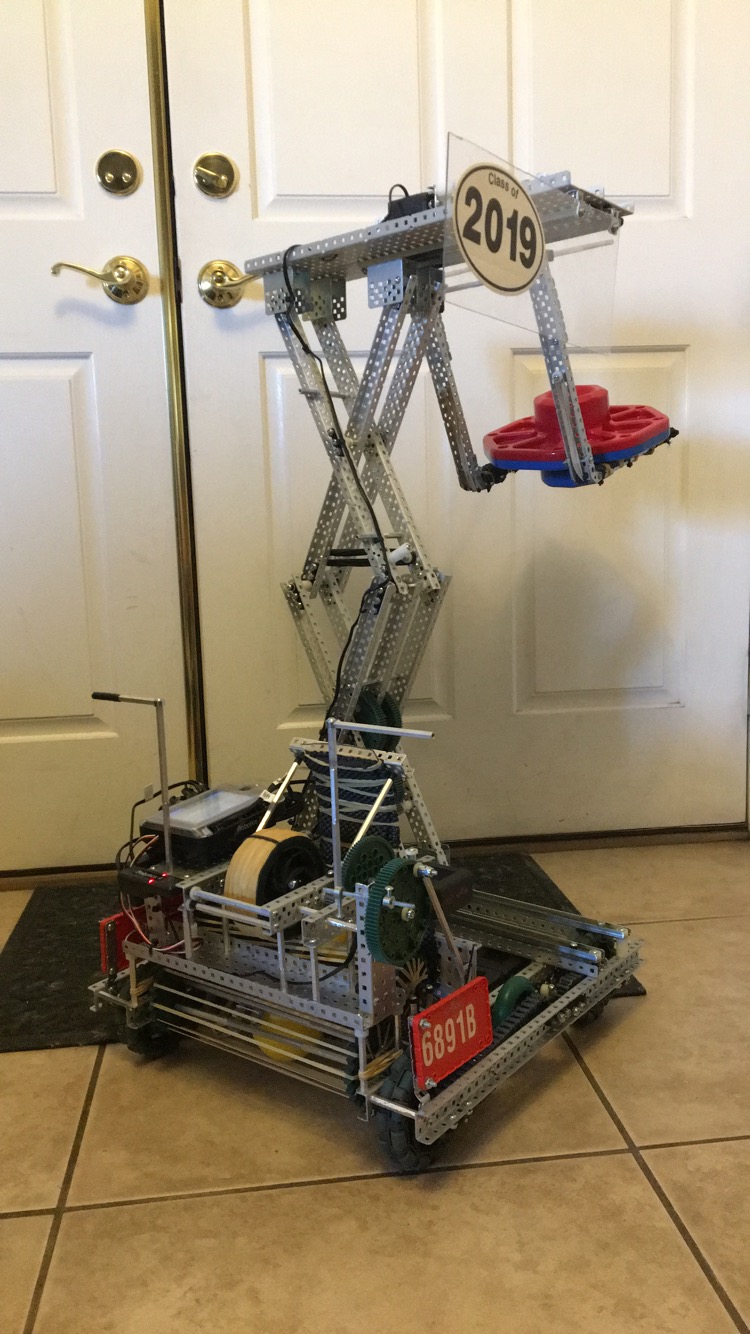 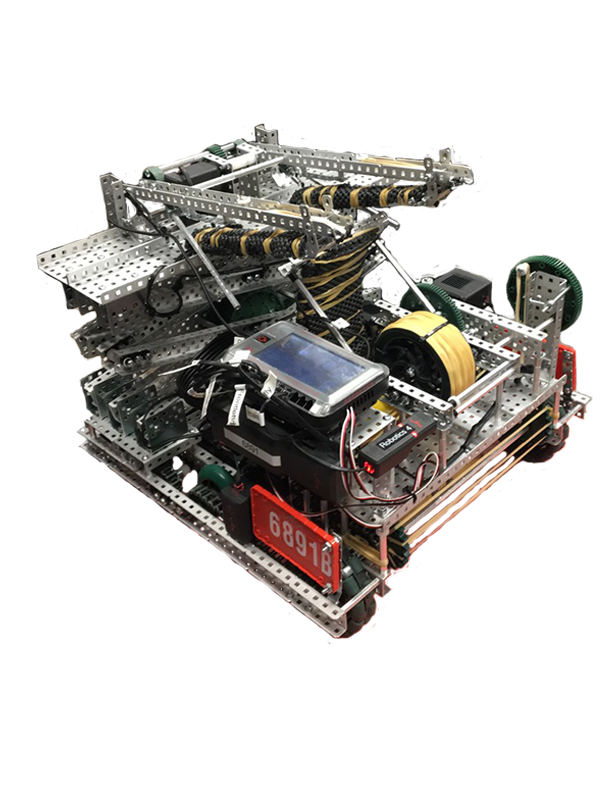 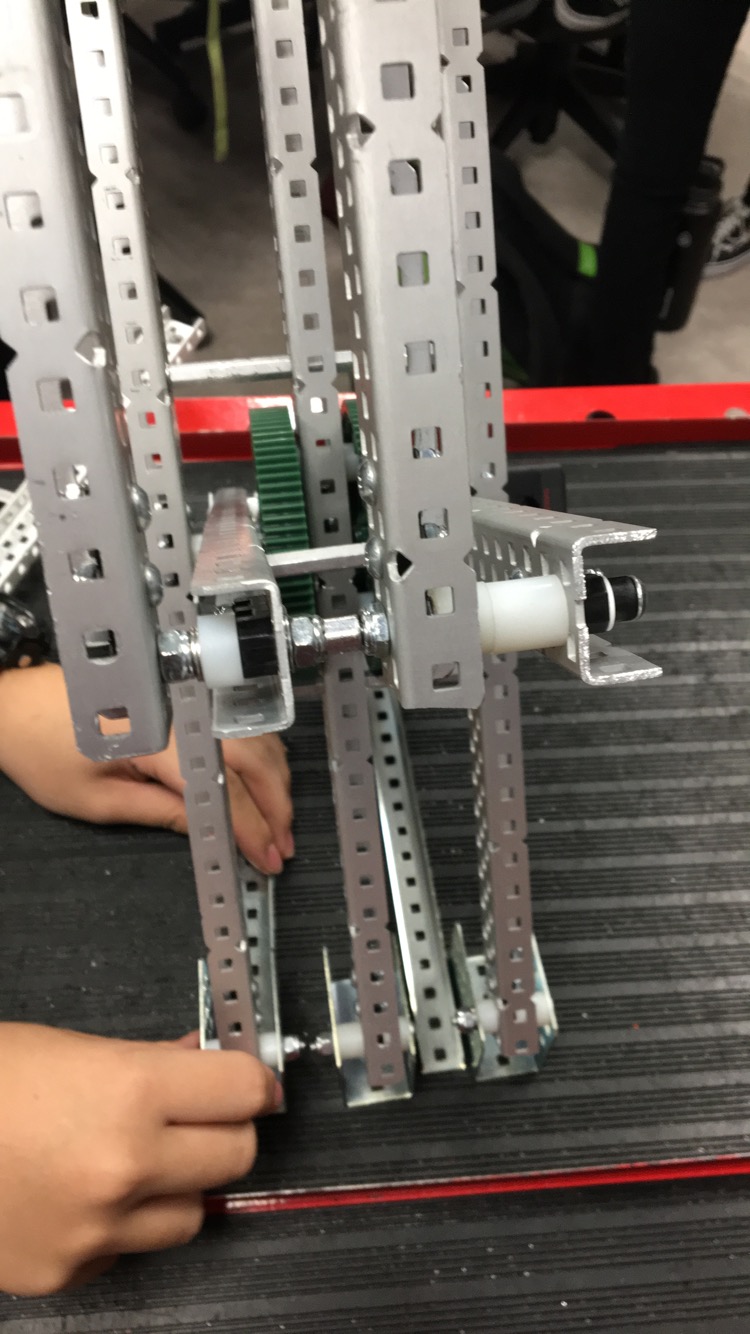 I would say that building a scissor lift with this little time left in the season would not be a smart idea. Scissor lifts tend to require lots of tuning and lots of time.

Don’t do it. It doesn’t matter how good you are at building or not. Its inefficient for the task at hand. You don’t want a scissor lift because it’s slow (the amount of materials required to build it simply weigh more than other lifts) and the cap poles aren’t very tall. It would be overkill for the height of the caps. You really could get away with a 2 bar but if you were going for a competitive cap bot than do a double reverse 4 bar due the linear nature of it’s motion. Look at 1814D for an idea of what a good cap bot is.

Besides that, I would just skip stacking caps all together and focus on flags just because stacking caps isn’t as effective as toggling flags. It’s up to you and I’m not sure what your goal is.