Is one team allowed to compete at two different competitions at the same time?

This might sound dumb, but let’s say that a school only has the funding to have one team, but can only attend two events that happen on the same day. Is a team allowed to build two robots and have one robot compete at each tournament? The closest rule I can think of is < R1>, but the implications seem to be around having either two robots at the same event or sharing one robot across several teams, not specifically competing simultaneously at different competitions.

Here’s < R1> if someone wants to point out where my logic is off:

One Robot per Team. Only one (1) Robot will be allowed to compete per Team in the VEX Robotics Competition. Though it is expected that Teams will make changes to their Robot at the competition, a Team is limited to only one (1) Robot. As such, a VEX Robot, for the purposes of the VEX Robotics Competition, has the following subsystems:
[subsystem rules omitted, not relevant for my question]
Given the above definitions, a minimum Robot for use in any VEX Robotics Competition event (including Skills Challenges) must consist of 1 and 2 above. Thus, if you are swapping out an entire subsystem of either item 1 or 2, you have now created a second Robot and are no longer legal.
a. Teams may not compete with one Robot while a second is being modified or assembled.
b. Teams may not switch back and forth between multiple Robots during a competition. This
includes using different Robots for Skills Challenge and Qualification Matches / Elimination
Matches.
c. Multiple Teams may not use the same Robot. Once a Robot has competed under a given team
number at an event, it is “their” Robot - no other Teams may compete with it for the duration of
the competition season.

And the clarifying red box under it:

The intent of < R1a>, < R1b>, and < R1c> are to ensure an unambiguous level playing field for all Teams. Teams are welcome (and encouraged) to improve or modify their Robots between events, or to collaborate with other Teams to develop the best possible game solution.
However, a Team who brings and/or competes with two separate Robots at the same tournament has diminished the efforts of a Team who spent extra design time making sure that their one Robot can accomplish all of the game’s tasks. A multi-Team organization that shares a single Robot has diminished the efforts of a multi-Team organization who puts in the time, effort, and resources to undergo separate individual design processes and develop their own Robots.

I’ve had this same question. I’d guess not, but hope yes.

Robotevents doesn’t allow it to happen at all, so the answer is no.

Even then, while the spirit of the rule seems to imply at the same events, previous discussions with RECF during EP Summits also outlines that this is not ok.

I work at a Robot after school place. We were discussing this question, and it seems that the only way it can happen is if your team has both robots under different numbers. I think they would not be under the same team then. We might be wrong.

You can bring something to one comp and then bring a completely different bot to a later comp, so I wouldn’t see why not.

One Robot per Team

I think this is what would keep you from doing that. If a team was in two competitions on the same day, they would need two robots. That would be a violation of this part of .

Isn’t the cost of each additional team to an organization after the first pretty minimal? ~ $25 IIRC? Less than 1 Smart Motor?

I think it’s actually 50. It’s still a good investment. If u have the resources to make another robot, then everybody who wants to be on the second team can just pitch in to the new cost. However, it will still be expensive to send both teams to states or worlds

Perhaps it is more. A quick search turns out that it’s not easy to find the actual cost to register a team.

For those who are wondering what the cost is; 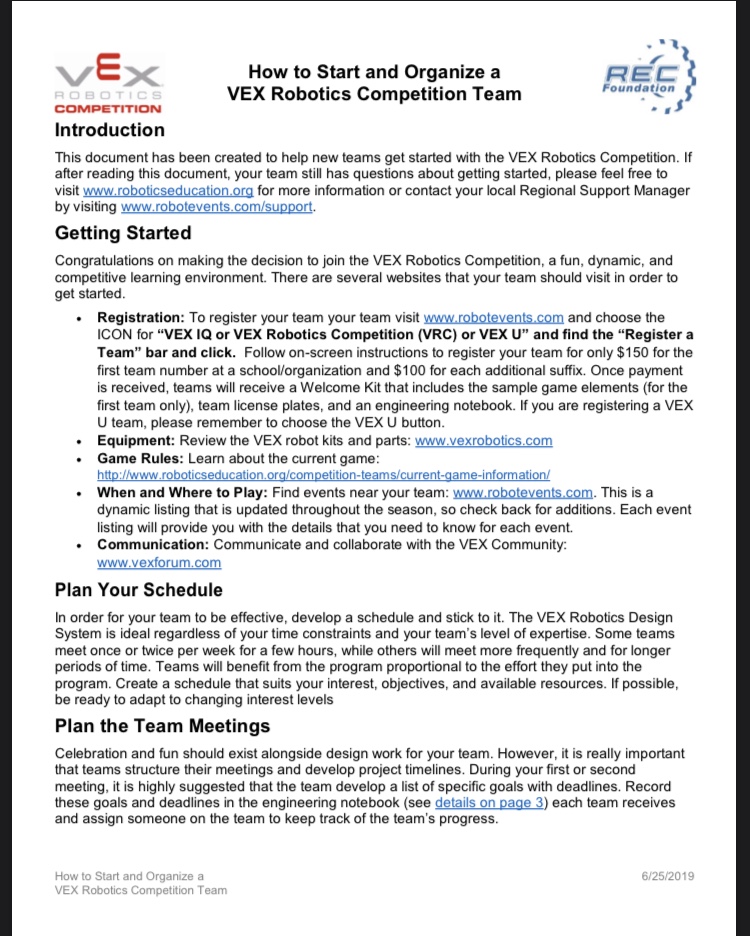