An alliance has 4 goals in one corner, while both robots drive back and fourth to keep the opposing team from gaining control of them.

(This occurred at the Ohio Columbus bluejackets event on 12/30/21, by the winning alliance 6008A and 1181A who also had several other violations dropped by the ref)

We enjoy hearing how everyone else would see this situation.

Did the robots have possession of the goals?

If they didn’t, then yes

This is not a particularly detailed description, so I could very well be missing something, but this sounds like hoarding to me.

Edited to add description I am going off of:

An alliance has 4 goals in one corner, while both robots drive back and fourth to keep the opposing team from gaining control of them.

Both robots were stuck besides eachother and the goals were next to them. 6008A and the eleryia robot looked stuck while 1181A was trying to push them into the platform

And they had the goals in a concave area. They were possesing them. .

o also had several other violations dropped by the ref)

Enforced and dropped too lol

I was also there (6008B) and you have to keep in mind that the head ref is very well experienced and does his research, there was also 2 different EP’s present.

So I am positive that they made the right decision

I also mean this in the most un-biased way possible 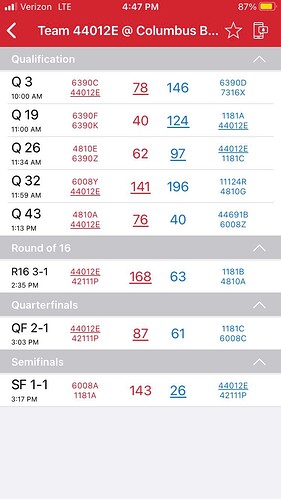 Does anyone have a video of the match in question?

Update: he has match video and it won’t let him post. He’s trying to make it a Google drive video rn)

Another update he couldn’t get the video

Perhaps he can try later when he has better wifi/service? I am interested to see how the match played out

When asking in regards to a different situation a definition of hoarding was given that followed the game manual’s wording. Outlined by Figure 12a 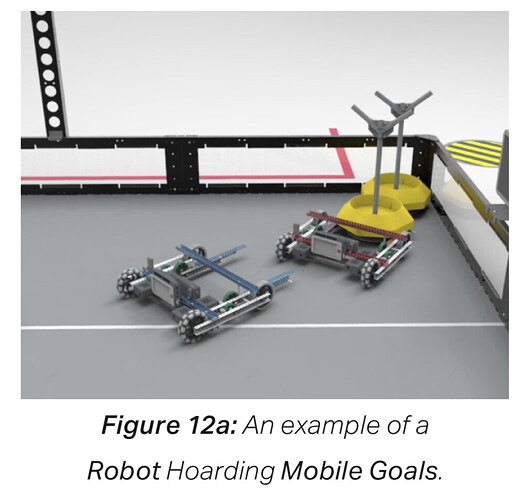 Yeah he should be Able to send it eventually.

I think it comes down to was ever goal in possession or not, since any non possessed goals would be hoarding, our belief was that one or more goals was not In possession justifying hoarding. Hopefully you can understand the conclusion.

If they werent in possession (moving goals through transfer of energy from robot to goals) then they were hoarding and was match affecting, which should have been a DQ

was he able to upload the video yet?

This is hoarding as the robots blocked the other team from getting the goal.

He has not. It says that Google drive isn’t wanting to.

I’ll get an update real quick to see