I didn’t really see any hoarding violations in the video. The tipped-over neutral goal was likely meeting the definition for hoarding, but that’s the only goal being hoarded as far as I can tell.

Definitely looked like a couple of sg3 violations happened though…

Hoarding isn’t dependent on which side of the field you’re on, you can be on the blue alliance and hoard on the red alliance’s side of the field. In the video, from what I can tell, the blue alliance was hoarding one goal, which was the tipped over one. Since the blue robot had clear possession of the other neutral goal, that one isn’t considered hoarded, meaning no hoarding violation took place.

that match video is from the finales match and not the semi finals match. but does show trapping

i agree and yes that could of been trapping or pinning but i thought since they could’ve turned to the left when 1181a balanced the goal and got out it wouldn’t of been?

Is the discussion about hoarding or trapping? Those are two very different things.

You can absolutely argue that the red alliance was trapping the blue alliance.

could of been trapping or pinning but i thought since they could’ve turned to the left when 1181a balanced the goal and got out it wouldn’t of been?

It was considered trapping the whole time according to G15:

<G15> No Trapping for more than 5 seconds. A Robot may not Trap an opposing Robot for more than five seconds (0:05) during the Driver Controlled Period. A Trap is officially over once the Trapping Robot has moved away and the Robots are separated by at least two (2) feet (approximately one [1] foam tile). After ending a Trap, a Robot may not Trap the same Robot again for a duration of five seconds (0:05). If a Team does Trap the same Robot again, the count will resume from where it left off when the Trapping Robot initially backed off.

The trap was continuous the whole time, and likely could have been called for a penalty. There is the other video this one is the full match 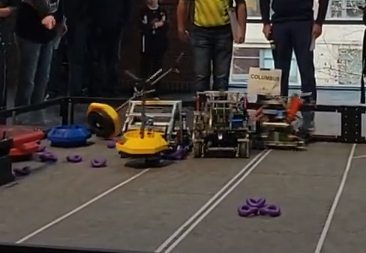 Both robots were stuck besides eachother

I feel like this makes all the difference. In one of my elims matches my robot was stuck on a ring next to our goals in the corner and it was also ruled as not posession.

Although I do not think it is hoarding, but this is a public forum not a private discord server. Many posts are ad hominem. After you explain why you think it is not hoarding, just stop typing. For example, it is irrelevant that his mom carried his robot. That being said it is up to the head referee’s discretion whether hoarding and I think he made the right call.

This one is a little tricky…

Let’s start with the obvious: G2.

The red box explicitly states that whatever the parent was doing is definitely no good.

From the limited angles we have, I don’t believe it’s necessarily hoarding. The tall neutral goal, from what I can tell, is definitely meeting the definition of hoarding. However, with the way the robot and the blue alliance goal is positioned, I don’t know that that’s really hoarding. 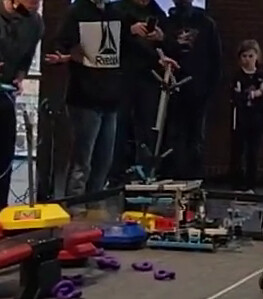 From this position, it looks as though the blue alliance goal is next to the robot, but isn’t really being blocked. As a result, I would argue this isn’t necessarily an SG7 violation.

I don’t know that this is considered hoarding either, as you can likely go around in between the bot and the platform. If we look at the red box associated with SG7:

The intent of this rule is to prohibit one Alliance from actively stifling gameplay by “locking down” Mobile Goals against the field perimeter and / or underneath Platforms. The following examples are not considered violations of this rule:
• Possessing multiple Mobile Goals (i.e. carrying, holding, or controlling the movement of multiple
Mobile Goals)
• Passively driving past a Mobile Goal while Possessing another Mobile Goal
• Parking next to multiple Mobile Goals while opponents are on the other side of the field, i.e. without
“actively blocking” an opponent who is trying to access them
• Placing Mobile Goals on top of an Alliance’s own Platform
In general, unless a Robot or Alliance is intentionally and blatantly utilizing a Hoarding strategy, violations of this rule should be rare.

Given the red box, I would rule more towards not ruling hoarding in this instance. Additionally, SG7 states that if it is not match affecting, it is a warning, not a DQ. I don’t believe you pulling one of those goals to your side would result in the match result changing, as, at the end of the match it appears to me that it would be 121 - 46, and, regardless of which goal you drag back over, it would not be enough to overturn the match score. Therefore, even if it was hoarding, it would not lead to a DQ.

This is just outright incorrect. If we look at the definition of hoarding from the game manual:

Hoarding – A Robot is considered to be Hoarding a Mobile Goal if it is actively blocking an opposing
Robot’s access to a Mobile Goal without directly Possessing it, such as by expanding horizontally
across a portion of the field. See Figure 12a and . Robots on the same Alliance working in tandem to block access to Mobile Goals would share the Hoarding of said Mobile Goal. See Figure 12b. Hoarding may occur anywhere around the field perimeter and / or Platforms; there is no requirement for it to be in a specific corner of the field.

It says nothing about needing to be on the row closest to the driver’s station, in fact, it says quite the opposite.

Bud read the new rules, it’s not hoarding unless u have two mogos that u are not in possession of, if u have possession of two, and have one in the corner, it is not hoarding, reading 101, read the rulebook, or go and have your mom read it to u, having a parent say one thing, is not a dq kid, not a single ref will dq a team for a parents saying something during the match, sorry, ig read the rulebook a little more

This is entirely unnecessary, you don’t need to attack anyone over a disagreement over how the rules are interpreted, and you definitely don’t need to go around attacking anyone’s parents.

Y’all are wildin, why don’t you put this effort into getting some b****es

To reiterate @MysteryMan_3141B, you are on a public forum, act like it. This is beyond unnecessary.

And to reiterate, add ons to the rule book are sometimes not added and on q and a’s and also u have to make sure u are on the updated rulebook, but just playing good defense is not hoarding, he might block them but he is not fully in the way

Can I enjoy my last few days of vacation without having to worry about the forum?