Whether the team has a good auton or not. Also how good they are at driving. It’s definetly gonna be less abt the robot and more abt the performance of the drivers

auton will be huge. I expect teams to get 2 stacks of 9-10 up during auton alone. that means they just need to do one more stack, which should take them no more than 20 seconds, and they’ll have the rest of the match to do towers or play defense. I do think towers are going to be less important, because robots will be so fast that if you slow down just a little to be color selective, then your opponents will get all the cubes. hoarding will be big, I wouldn’t be surprised if entire robots dedicate themselves just to hoarding cubes for their partners if their partner is a better stacker then they are. defense will continue to be op.

Yeah I was actually watching one of the China matches the other day, and almost all the cubes were scored and there was nothing in the towers. Honestly using the rainbow strategy really negates the effect of towers.

Which most teams late season should be able to do

Autonomous is going to be huge. So far I haven’t seen many teams try to collect a lot of the same cube and then put those cubes in towers, but I feel like that is going to be the end game of this season. The max point potential when you collect many of the same cube is huge, but unfortunately it just hasn’t been done in many tournaments which is probably why it isn’t popular. I feel that when a team successfully does it though, everyone will.

K well think abt it. If a team is going for a color, then it makes sense for the opposite team to take that color away. Bc of the spread of the cubes, if a team tries to take only one color, the other team just has to take all of that color on their side. Now u just have a rainbow scenario. Picking one color is so easy to counter it’s not worth it. U could argue that both alliances could be going for one color, but y do that when u can pick one color and pick up the color the opponent is going for along the way. Oh wait… now the other alliance is doing that… oh shoot that’s rainbow. Picking one color just isn’t practical in any way. If a team can rainbow rly well (as in making sure there getting all colors and not accidentally picking up only one), then that’s going to be good. That’s the sort of thing that can win matches.

Thanks for reading that blurb abt the irrelevance of picking one color.

K that last statement mighta been a bit harsh so if anybody would like to offer a counter argument, I’d be happy to here it.

Starting out by picking up a single color of a cube would still be extremely helpful. Even if they did start picking up the same color of cube to put the game back into a rainbow scenario, picking out a singular color takes time. Simply switch back to picking any color and by the time they realize you don’t care about a specific color you’ll be ahead of them in overall cube count. By doing so you’ll have beat them at their own game.

Win but with more cubes

Let’s say in autonomous you and the opponent both get two stacks in. Then it will be a race to get the third stack in. If one robot plays defense outside the protected zone and the other gets a monostack if like 11. Than you can play towers and defense and win the game. Even if they eventually break through the defense. You will already have a stack that will give you a distinct tower advantage.

What auton routine would get so many cubes in on the side with the larger goal zone. I just don’t see it being possible. Also, so far on the other side, the most I’ve seen is the 8 cube auton. Sure, if an extra cube get pushed over from the other alliance there have been 9 cube autons. Other than that though, the 8 point auton are already barely in the 15 seconds. The most I can see is one stack of 6-7 in the large goal zone and one stack of 8-9 in the small goal zone.

In Vex U it is certainly possible. With 45 seconds I can totally see a field being cleared just in auton.

I’d love to see the tower play in vex u. 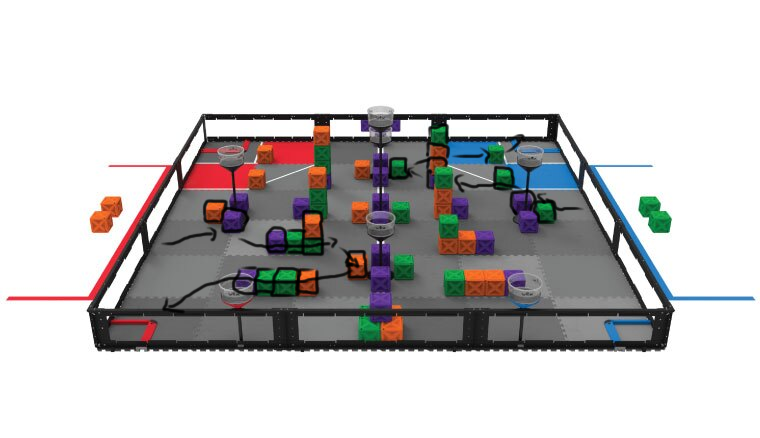 autonomous points will probably be the defining points in the match.

I forgot to addin the part about the cubes but yes.

auton is of utmost importance this season. it is so incredibly crucial that you make 2 stacks during auton.
at my first event this season I had a 7 cube simple tray, it wasn’t that good at all, took all driver control just to make a stack of 7, and it didn’t intake very quickly. there were much better robots at that event, some good 9 stacking complex trays and dr4b trays that could all outstack us. but despite that we ranked first and lost finals by only 4 points, because we were the only team with a reliable 5 point auton. that stack of 5 and 6 points gave us a huge head start, imaging how big of a head start 2 stacks of 8-9 and 6 points gives you.

the 6 points from auton are swing points, because if you get them your opponent doesn’t, but if you don’t get them they do. so really they have a value of 12 points.
12 points plus lets say 2 stacks of 9 is 30 points. that is HUGE, 30 points is such an enormous head start. thats like 3 stacks of 10 before driver control even begins. and those purple auton bonus cubes can be useful for towers if you target purple for your last stack.

My team already gets a stack of 8 cubes in the bigger goal zone during autonomous, and it’s going to be more now that we have our tracking code working.