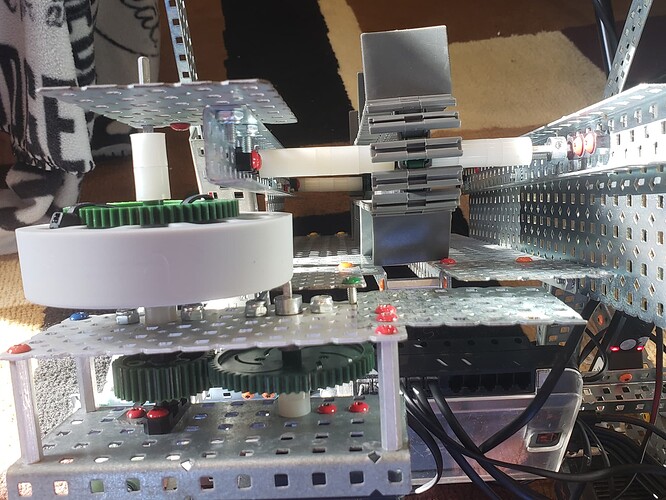 Help, I am trying to get the disc to launch. However, it gets stuck on the flexi wheel. Or when it does launch, it doesn’t go very far. Please help 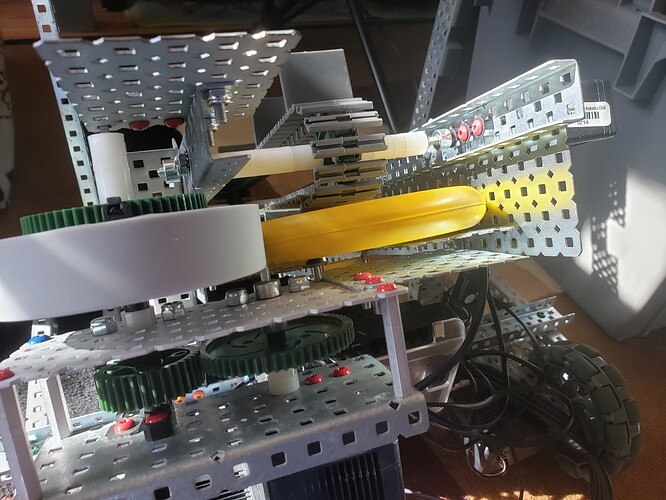 too much compression? (which could explain getting stuck at flywheel… Also when stuck, does the flywheel stall? what gearing and gear cartridge?)

those details will help debug.

It looks like you have 5" between the flywheel and the opposite side of the launcher. You might expand that to 5.5" or 6" with some foam opposite.

The flywheel does stall, it is a blue cartrage at at gear ratio of 5:3

The flywheel does stall, it is a blue cartrage at at gear ratio of 5:3

So given small opening 5" you are compressing the disc too much, so blue cartridge will give you speed at the expense of power - hence the stall. Generally, with flywheels you will want very high RPMs and just enough compression to launch the disc. The flywheel will lose a lot of energy after launching a disc. So you will either have to account for that by letting it get back to target RPM (and not feed more discs) or add weight to flywheel to compensate for loss of energy.

Just because you set the rpm in the code doesn’t mean that it will spin at that rpm, gears will change that. Also, what I’ve found is that 3000 rpm is generally the minimum rpm to launch a disc. I would make the distance between the flywheel and the other side of the launcher about 1/2 inch less or 1/2 an inch more than the diameter of the disc (5.5 inches). It will go farther if it is squeezed through a bit.