Limiting RPMs From What is Actually Coded

Hello, I have a slight problem. I was working on fixing the RPMs on a FlyWheel that my team and I were working on and I noticed that the motors were not reaching the coded RPMs. We have a separate code that only runs the two motors powering the FlyWheel, and it was reaching its set RPMs. I did a little more testing with the main Controller/Autonomous code and made sure that they were identical to the dedicated FlyWheel code and they were. Then, I made sure that it was not just because I was running four other motors and it was limiting power, but I concluded that it was because when I went to increase the rate, it was limited to as I assume, 50 RPMs. As I increased it past its 65 RPMs original speed it would not increase past 50 RPMs. Can Anybody help me understand why that is happening and is there something I can do to prioritize the FlyWheel while it is running so this does not happen again? Thanks for helping ~Drew 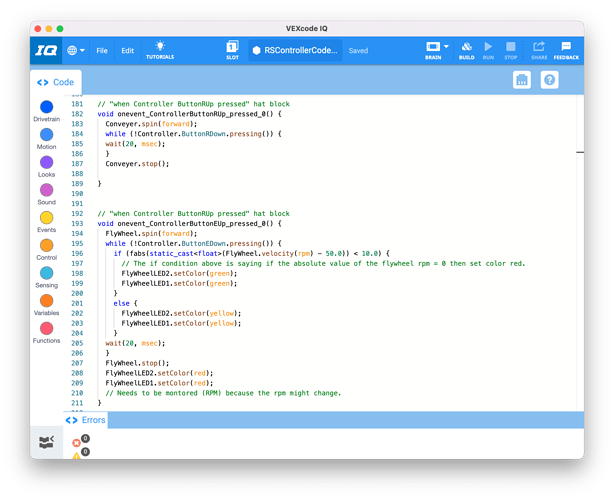 Hi there. I think that in VexCode IQ, there is a limit to how much RPM can be coded into a program, as I have had the same issues with my team. I do not know what the max RPM is, nor why the software limits it, but I would recommend using a physical gear ratio to speed up motors for a flywheel.