What might be the best solution to this problem?

There are a couple things that you could try.
1.) try using two pistons per side as this will provide you with two points for the pistons and keep the slop down some. If you do this be careful that you make the tubing to each pistons the same. Otherwise the pistons won’t fire at the same time, causing some excess friction when moving.
2.) if you are in vexU and have access to a 3d printer you could just make a new clevis/rod end for the piston that has two or more mounting points built into it. That would be a very easy and simple solution to your problem
3.) Try to keep the piston from being able to rotate during actuation. Either zip tieing or placing screws next to the cylinder body. By preventing the cylinder from rotating it should provide a straighter actuation, decreasing the amount of friction in the system.
4.) this goes along with point 1, in that check your tubing run lengths. Try to make them as close to the same length as possible, so that both sides actuate at the same time. Might not be the problem, but it could also help

hope that any of these may be of help, and that you get it dialed in

@nbennett In response to step 3, currently the piston itself isn’t moving around as much as the connection point between the piston and the L-channel.

It is actually hard to visualise how your mounting looks like.
A pic will do wonder

@meng here it is, where the piston is attached to the L-channel is where it shifts around because of the friction caused by the linear slide. 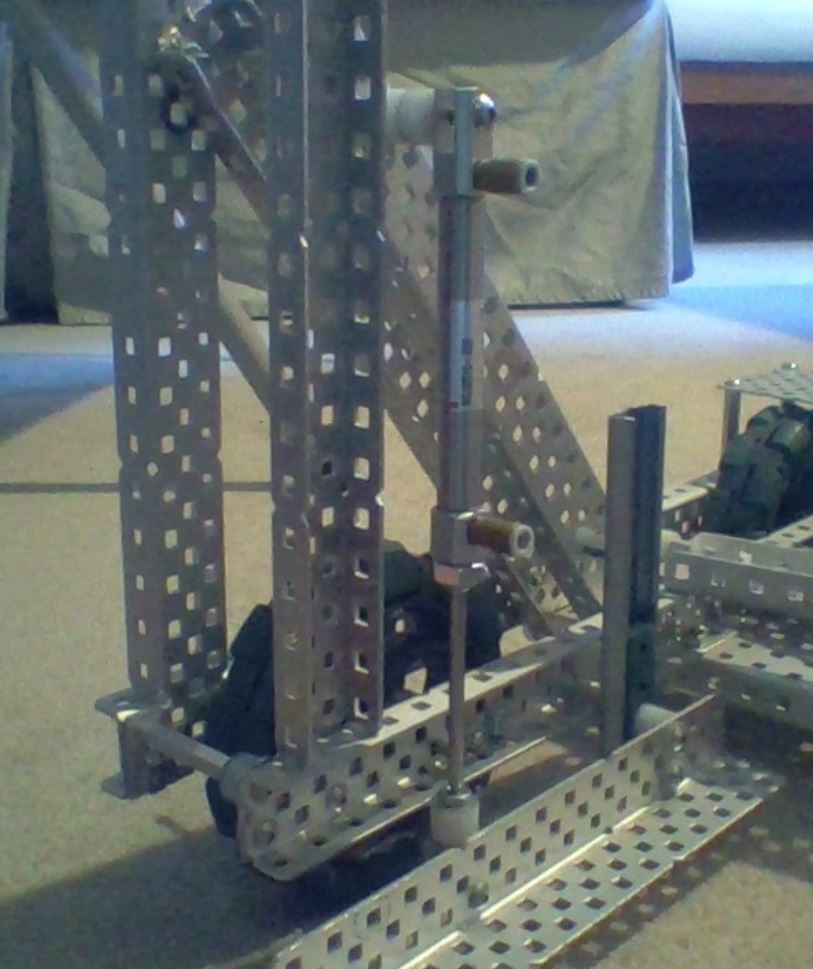 think the main issue is the mount of the piston and linear slide is too far apart.
The force from the piston is not just pulling the linear slide up, but it is also producing a turning effect on it (unless the slider is able to moving up and down with no friction).

And when the linear slide is not moving vertically, it will cause the plastic slider to tilt and rub against the sides, resulting in even more friction.

@meng Can you clarify what “CG of the mobile goal” means?

CG = centre of gravity… which for most symmetrical objects, we can assume it is acting from the centre of the object.

This means the weight of the mobile goal is pulling it downward from the centre of the goal. And since the pivot (i.e. the linear slide mounting) is not in-line with this weight that is acting downward, it will result in the weight causing the entire mount to tilt forward, and hence resulting in even more friction on the slider.

I see… so by moving the piston and linear slide not only closer to each other, but to where the CG of the mobile goal would result in less tilt, correct?

I see… so by moving the piston and linear slide not only closer to each other, but to where the CG of the mobile goal would result in less tilt, correct?

That will be ideal.
But of course, the next question is - how to squeeze everything into this confined space