I made this to share all the luckiest moments you had in vex.

I was first seed and I accidentally picked a clawbot because the representatives for two of the teams were looked very similar. So after I chose the team and went to their bot my jaw dropped after I saw that it was a clawbot. Automatically like any normal human I gave up but after our first match I actually had some hope because we won and after that we won the tournament. That was the last tournament for us so if we did not win that we would not have gone to state.

Similar thing here we picked the 12th ranked team because historically they had been a really good team so we figured that they had a bad schedule or something. After we started talking they told me that their ring mech didn’t work, their drive had 1 of the 6 motors not powered so it was basically slowing down one side of the drive and only their front clamp works. But they could park, So we made it through Round of sixteen and quarter finals, but then we got to semifinals and we were against 2 teams with good ring mechs, parking potential and one of the 2 had a really fast grab time. any how we won our Mogo rush and our teammate also won theirs by some miracle. in the end we won the match by 4 points. 156-152. And we only won because one the team doing rings missed like 8 rings so instead of 3points they counted for 1. Not my video but this is that match . Anyhow long story short we managed to win the tournament and qual for states.

I know that I have posted this video so many times before, but I love it. The most clutch win I have ever had and it was in the finals. 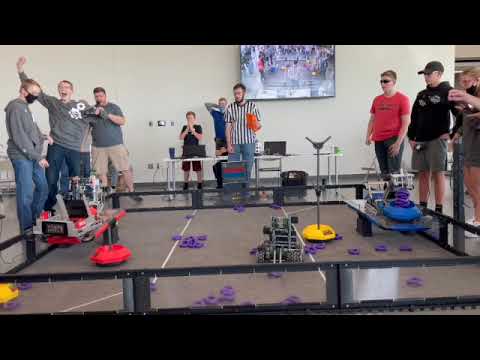 Not me, but in change up state semi-finals this team was heading towards the center goal at the end of the match, when time ended they had a ball in their rollers and hadn’t yet made it to the center. They coasted and somehow managed to push the ball in with their rollers into the bottom of the center goal, swinging 14 points and winning the match after time ended.

Yo was that the finals match for a Davis high rise above tourney?

Not exactly luck, but we won State and got max points (for what our robots could).

I saw this entire thing take place! (I was actually the one filming, haha. Sorry if the video is shaky. I don’t have steady hands)
That entire competition was crazy: another one of our Gateway teams (8349A) somehow clutched their way to the finals that competition despite historically not performing super well. And, well, the situation you just described. (We also had plenty of our own technical difficulties that day, including having to swap clamp ports two times mid-competition lol)

When we were at a competition, one of the platforms on one of the two fields was tilted significantly (15° tilt instead of 22° tilt). So basically out of 4 platforms, only one side of one of them was like this. Our robot could not park as it was early in the season and was not something we really thought about. We were losing by a decent amount, but during the final 15 seconds of the match, we managed to be on the field with the tilted platform, be the correct alliance for the platform to be tilted, and had been on the right side of the field to be able to platform on it. We beat the other team by 4 points by parking with 1 goal.

At our states we got partnered up with a really good team and we are good ourselves and in the semis we had to go up against the best team in the state (top skill score by over 50 points, won every single other tournemnt). They had beaten us in the semis or finals at every tournament. This being states our states tournament finalist qulifies for worlds so this was a very important match. They win the goal rush so we are down only having one neutral mogo then to add to the situation our alliances robots battery gets unplugged with about a minute lefr. We stack one on the platform witch is full with rings and we have one neutral mogo on out side then the other team takes our alliance mogo and they have a mogo stacked and all the other mogos on there side. They are completely winning. Then the best teams alliance mates go’s and tries to stack another one which was uneeded and the whole platform tipped causing us to win the match by 9 points because of our rings.

Ps. Both of the teams on that alliance we beat ended up qualifying for worlds due to their skill score and the design award so this match didn’t hurt them to much.

Lost in final match. Announcer said we won before the count was actually done, but the event was originally meant to qualify finalists for states but a few teams didn’t show so it didn’t happen. The EP talked to someone and as finalists got to states. Now I states we won build award and now on to worlds with something that barely functions.

our score: 85
their score: 81
at the last second sister team 2s drive shoots ball, it fails, goes into corral, and we won, in the video you see me arguing with a friend on sister team about whether we won or not
if they hadnt shot it they would have won by 1 point
it was bittersweet cuz sister team 2 really deserved to qualify for nats, but luckily they qualied later