What are some designs you guys are using for your mobile goal intake? I tried a variety of ideas but I have very little space and time.
Thanks.

We use a 4 bar like most teams, but there are several more designs that also work:
chainbar-probably takes less space, but isn’t as strong IMO
linear lift-not as good for putting mogos in the 20
2-bar-not the best design for this, but it works
passive lift-don’t use unless you can’t make an actual lift

So to sum up, 4 bars are the most dominant so far and probably your best bet

We use an array of pneumatic pistons, 2 vertical, 2 horizontal. Works pretty well.

we stuck the mogo intake to the back or our dr4b. probably temporary, not efficient by any means, but It works.

No I think he was talking about using rails to lift his up. If I’m wrong @robotguy will correct me and elaborate I’m sure

Thanks for all the ideas. I think a two bar would fit my design to pick up the mobile goals.

No I think he was talking about using rails to lift his up. If I’m wrong @robotguy will correct me and elaborate I’m sure

no, im not using linear slides i just have it as a small arm so it tilts the front up when it lifts but i just finished it and proof of concept is good. a bit of tweaking and ill be there. @BBBcube3.14

I’ve seen a fair share of robots that have a wide claw that can pick up cones and mobile goals, Also have seen people put stuff on the back of a DR4B that uses the power of the lift to move mobile goals so it doesn’t need any extra motors. But the 4 bar mobile goal lift seems to be the most common.

Because it is the most efficient, arguably. It may loose some of the points it gets for style and efficiency in the fact that it’s pretty big (If you are looking for scoring 20 points with minimum effort). but most teams work around that.

We use a 4 bar like most teams with a 1 motor 1:9 gear reduction which works great on conserving motors for different parts of your robot. 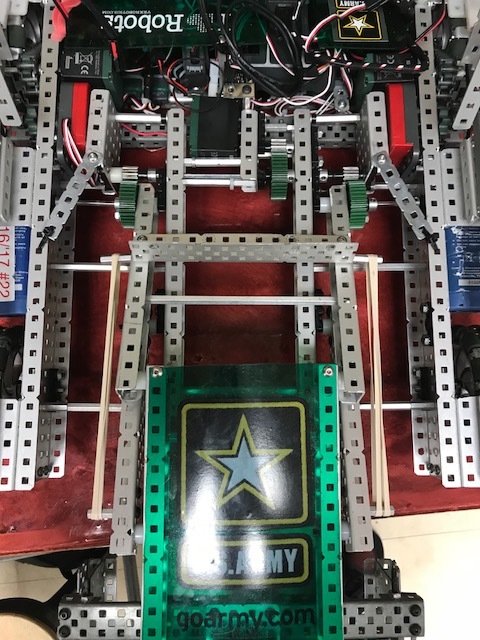 I was confused by that to. I though it could only get to 1:7

I was confused by that to. I though it could only get to 1:7

Compound gear ratios. If you look at their image, you see two 1:3 reductions.

Well if it isn’t inside the sizing box then it’s useless because you won’t be able to compete with it.

One of our teams has a linear gear rail mounted at a 45 degree angle, with a large passive claw at the end to grab the MG. It works really well; very sturdy and consistent. Might take more space that other MG lifts, but it only uses one motor.

A couple other teams have a virtual 4 bar made of gears (“gearbar”?). Each side of the lift is like a standalone component with the motor included in the package. The whole component can be easily re-positioned on the robot as needed. The main drawback is that it is sloppy, even worse that a chainbar. When they pickup a mobile goal the claw will bend a few degrees.

points it gets for style

Mine is way outside the box

@Easton I think he meant it’s out of the box as in thinking-wise.