Very new to programming and vex. In modkit with a hdrive how do you get the extra motor for the middle omniwheel to drive left and right when programming. I tried broadcasting and then going under the motor but it only does one command and I need it to be able to go left and right.

Drag both a controller and motor out. On the motor image, you will see a very small controller image on the lower right. Click that small controller image to open up a dialog box that will let you assign a controller control to that motor. For example, assign “C” forward and reverse to make the right joystick move the motor left and right. Depending on how your motor is set up on your robot, you may need to choose reverse/forward instead. You don’t need to write any additional code when you set it up this way.

I can control the motor fine. I need help with the autonomous part of programming the motor in modkit

I see. Could you use two broadcasts - one for left and one for right?

I tried that but only one works. I know it’s something small I’m not seeing

Would you mind posting your code and robot configuration? I’d like to duplicate what you have set up to help troubleshoot it.

Here are some snapshots of our code. We have a Slide broadcast (first image). We then put what’s in the second image in the Brain tab. 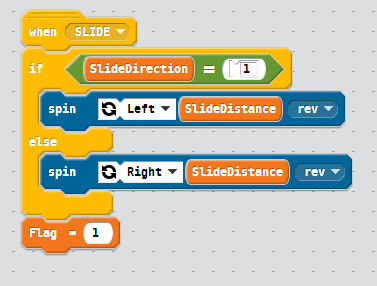 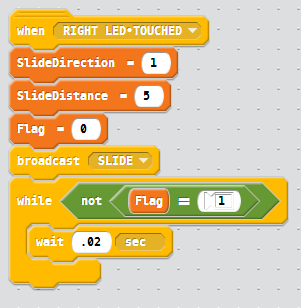 Did you ever figure this out? I can get them to move, but they move large distances no matter what…