There was already a topic for this but it is 2 years old. I thought I would create a new one.

We all know that some places are harder for vex teams than others. I was curious as to which were the most competitive/hardest regions in your opinion.

So what region do you think is the hardest to compete in this year?

http://vrc-data-analysis.com/ would suggest that Michigan, California, Texas, and Ohio to be the top 4 competitive regions, though I’m not sure how good it is at comparing teams from different regions against each other.

I wonder if there’s a way to filter by regions in Texas or California, because I can say with a good bit of certainty Texas Region 1 is by no means included in that.

Texas Region 2 seems to me like its a little more competitive than region 3, but I’m not completely sure.

I wonder if there’s a way to filter by regions in Texas or California, because I can say with a good bit of certainty Texas Region 1 is by no means included in that.

As far as I recall, the RobotEvents data only has State (or Province) and not “Vex Region”.

There were a number of events in Ohio earlier in the year which did not appear to properly upload results to RobotEvents, so Ohio may be a bit under-represented.

There is a bias towards teams that play more matches against higher rated teams. Without a lot of cross-state matches, each state can tend to become an island. Is a team that dominates in state A able to dominate in state B? Without a fair number of matches played by many teams across the two states, it’s difficult to determine. Signature events can help, but generally, only “top” teams will travel for these, along with a fair number of local teams.

From what I’ve seen of matches on YouTube, there’s a fair amount of variability in play-styles. From experience and observation, I would say Ohio teams tend to play pretty fast and pretty aggressively. It will be really interesting to see how the Kalahari Signature event shakes out, based on how many teams attend from a wide range of states.

Based on matches I’ve seen on YouTube, I would put California and Ohio as the two toughest regions currently. There are a number of individual teams from other states that are highly capable, the WPI Signature event highlighted a number of these teams.

Lots of good insight here. I am surprised to hear about Ohio playing fast and aggressively. On YouTube, as far as I’ve noticed, the majority of the best matches have seemed to be at the Signature Events and in California.
Based on the Data Analysis rankings Texas would be up there, but like you said, there has not been a whole lot of match play between states, especially since our top teams all went to Battle by the Beach in Galveston for their signature event.
Here in North Texas I must say, there are a decent amount of good teams see 580X, 1082, 7110, 22204, 5408 etc but a whole lot of bad teams for them to pick up points on.

especially since our top teams all went to Battle by the Beach in Galveston for their signature event.

Battle by the Beach appears to be one of the stranger Signature Events. Only 3 teams from California, with the rest all being Texas teams. Maybe they were from the different Texas Regions. Not sure.

Yes, that is right. And I must say, that the low quality of that tournament is sus.

Ohio is one of hardest regions. With teams like dougie (60883D) and the Brecksville (2011) being extremely strong and elyria (11124) possibly being some of the best match bots. Ohio also has a number of very strong other organizations as well.

Well, I’d probably have to say California, but I’d really love to see my region, Southern New England, become a more competitive region. The number of high-level teams here (and no offense to anyone) is shockingly low since it does incorporate 3 whole states.

I’m surprised no one has mentioned Indiana yet. If you look at the world skills rankings, they have more teams than any other region in the top 20.

I would have to say Utah is up there, we have a lot of really good teams and some really high scoring matches!

I have a midwestern bias. If my teams qualify for worlds and have a schedule where their partners are alphabetically from (without knowing the specific teams):

I’ll think that they have a favorable schedule. 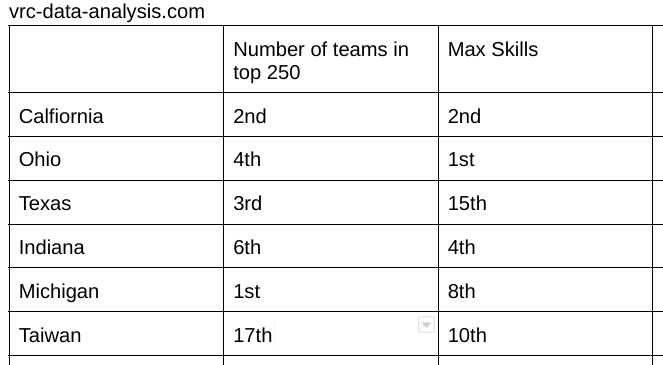 These are most of the regions mentioned in this thread. I did not include China because on the site divides China into local regions.
I would say that normally China and Taiwan would be good but are limited due to COVID, but I might be wrong.
Besides that, I would still say Southern California and Ohio.

Another thing to consider is there are different definitions of competitive. Do you mean which regions elite teams or the best or which region as the overall strongest average team?

When looking at the most elite teams in skills… There is absolutely no contest which region is the most competitive:

You have to look down the World Skills Rankings to number 21 to find a 2nd team from any single region that isn’t Indiana. In the mean time you will have passed 6 teams from Indiana…

Also, those 6 Indiana teams are from 6 different organizations. 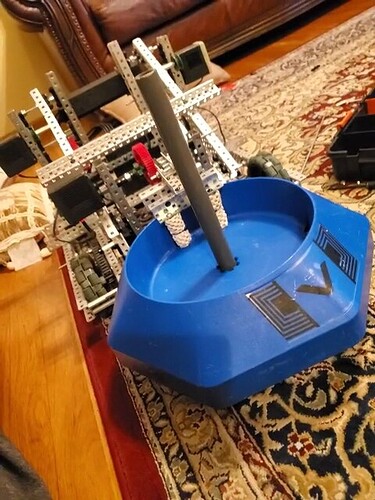 I would say with Ohio that the northern teams are more competitiv. Even if it isn’t divided into regions, prior to last year the sourthern portion did not have anything super competitive. With the new year we’ll have to see if the southern portion can keep the momentum, but I would say the Ohio ranking is mainly due to northern schools.

But yes, 580X is just always good, Lovejoy does have good teams such as their C team this year, Carrol is overall one of the best schools I’d say in Texas, and Sachse has some really strong teams.