Motor is unable to move even outside of program

During our last competition, our clamp motor locked up several times throughout the day. When this motor locked up, we were unable to physically move the mechanism attached to the motor at all until the robot was completely turned off. When the robot was turned back on, the motor would be flashing. We replaced the motor 4 times throughout the day and moved ports twice. Still had the same problem. I don’t think that there is anything wrong with our code as the motor is still locked even when the program is no longer running. We even took apart a motor cartridge of a motor that had locked to see if there was something stuck in there but didn’t find anything. We ended up changing our cable connecting to the motor, the motor, and the port before our semi-finals match and did not have a problem in that match or the finals one(although I doubt the problem is solved, it did last the rest of the day)

I don’t think it is a programming problem as it is super simple and mirrored for other mechanisms on my robot.

Is this common? Is there anything we can do to prevent/fix this?
Thanks in advance.

You might have had an overheating issue especially if the clamp system had a lot of tension in it or if you were winding down the motor to much like if a goals was already clamped in but you kept running the motor down. we had an issue with our lift were one of our 2 lift motors would freeze up similar to what your saying because there was a lot of un needed tension in the system which was fixed by removing a set of idler gears that were being wedged. Since we have not run into any overheating issues or the freezing up issue.

especially if the clamp system had a lot of tension in it or if you were winding down the motor to much like if a goals was already clamped in but you kept running the motor down.

Thank you! We thought the same thing and changed our brake type from hold to brake. Do you think it could still be overheating? The clamp itself does not have any rubber bands tension otherwise. After matches, we would feel the motor and it did not feel hot to the touch but I will definitely check into it. Our mechanism also doesn’t require any hold pressure to keep the mobile goals secured, we just have the brake in case we run into something the mobile goal doesn’t immediately slip out.

Here is a picture of our clamp mechanism: 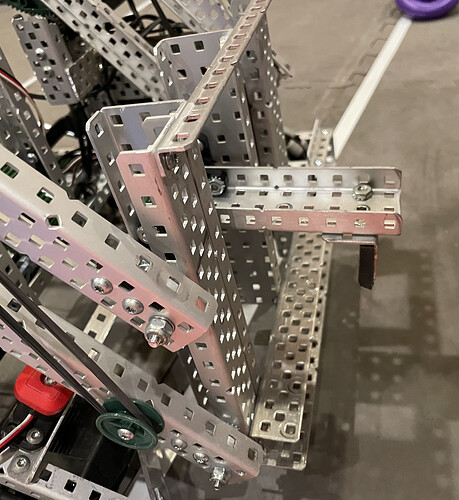 Was your motor still stuck when connected to power and not the program but then “unlocked” when turned off as well?

I can account for this we had a similar issue with our mogo hook powered by a motor, we fixed this issue by getting rid of the idler gears as well and just geared it as is without the set of idler gears. If this doesn’t work then see if there’s any signs of unwanted friction or if you can change the geometry of the clamp so that its in a position where the clamp is at low load.

Thank you! Will definitely try adjusting the mogo hook, right now it is just a direct drive with a 100 rpm motor, no idler gears.