The problem that have been in our school for a very long time is when one team in the school gets qualified for vex worlds, our mentor will add all the other team’s members to that team and all the teams will be sharing the awards that team gets. This causes many people never doing any work and sharing other teams awards and going to VEX worlds because another team gets qualified. I don’t know if this is the right thing to do, because VEX should be a competition instead of a family reunion, if your team gets qualified, then your team goes to vex worlds, if your team doesn’t, then you don’t go. It doesn’t make sense when one team worked really hard to get awards and gets qualified, and all other team’s members comes to share the awards that team got and go to VEX worlds with that team. Does anyone have any solutions to these kinds of problem or any good ways that VEX teams from your school is using.

I would prefer to this rule. From this rule it seems what your organization is doing is completely against the b section of this rule 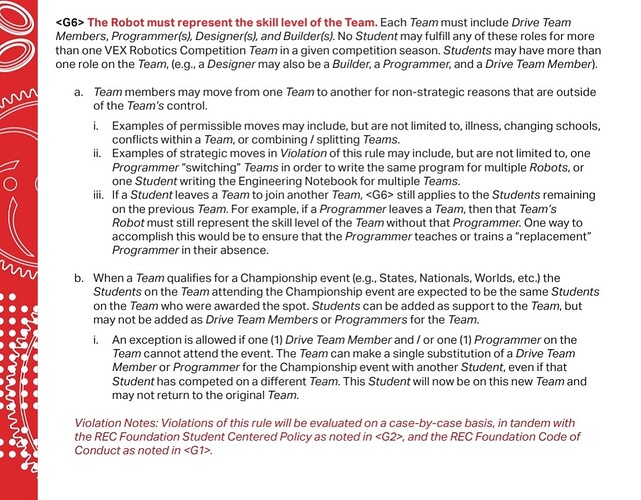 Think a lot depends on the context.
Eg. Members are added into the team for supporting roles, such as logistics, scouts, etc, then it is perfectly fine. So these newly added members are still contributing, just not as drivers or programmers. And hopefully by having more students attending worlds, it will inspire them to do better.

But of course it will be a totally no-go if new members are added into the drive team, etc.

But will they be able to go on the field when there is a tournament and share the awards that is won in worlds by the other team?

The problem is that they are doing this just for worlds because it helps for the college application. But if the team wins awards in worlds, would the support members be able to write it in their college applications since they just went for fun

I don’t know if they would be able to write it in because it is technically it is illegal. It’s more of a moral issue rather than them being able to. Whether or not they were support does not matter because as I said this is mostly concerning the b part of the rule.

But will they be able to go on the field when there is a tournament and share the awards that is won in worlds by the other team?

Go on to the field as in playing the match as part of the drive team?
If this is what you are saying, then it is clear in the rule that this is not acceptable.

But the rule does allow members to be added in - to support the existing team, but not as part of the drive team.

But if you feel strongly against having new members added into the team (as supporting crews), then do speak to your teacher or mentor about it.
Do bear in mind that it is useful to have a few more members around during worlds (unless your current team is already big enough) to help out with the scoutings and logistics. And it is difficult to draw the line or define how much “support” given by the new members is considered as good enough contributions.

Do bear in mind that it is useful to have a few more members around during worlds (unless your current team is already big enough) to help out with the scoutings and logistics.

This should be the deciding factor for a mentor/coach to consider adding support crew to event. For middle school, if you have a 3 person drive team, two scouts, and two pit crew at Worlds, that will probably do very well at Worlds - no one will be perfect, but you adapt the team to the skills they bring. One extreme is the private team with one or two adults helping, that is a case where you want to bring along a few friends to help out. The other extreme is bringing 15+ middle school kids because as a club they need to celebrate the season, you end up not helping the team that earned the spot to worlds by having a coach/mentor unable to give quality time to the team.

@Piston I think the conversation your team with your mentor/coach should be pragmatic - how can you properly staff your presence at Worlds so you can be successful. Clearly, too many ends up being chaotic and unhelpful. Too few, and you run yourself ragged and miss opportunities (from scout visits, interviews with judges, to just being able to have a good time overall). As for what your classmates write on their college applications is not a reflection of your team’s performance, but rather a reflection of poor character that really no one can control. So take that out of your conversation.

The rules are clear about what are core roles on the team that can be substituted for certain circumstances. It does not include adding more to those specific core roles because you are heading to Worlds.