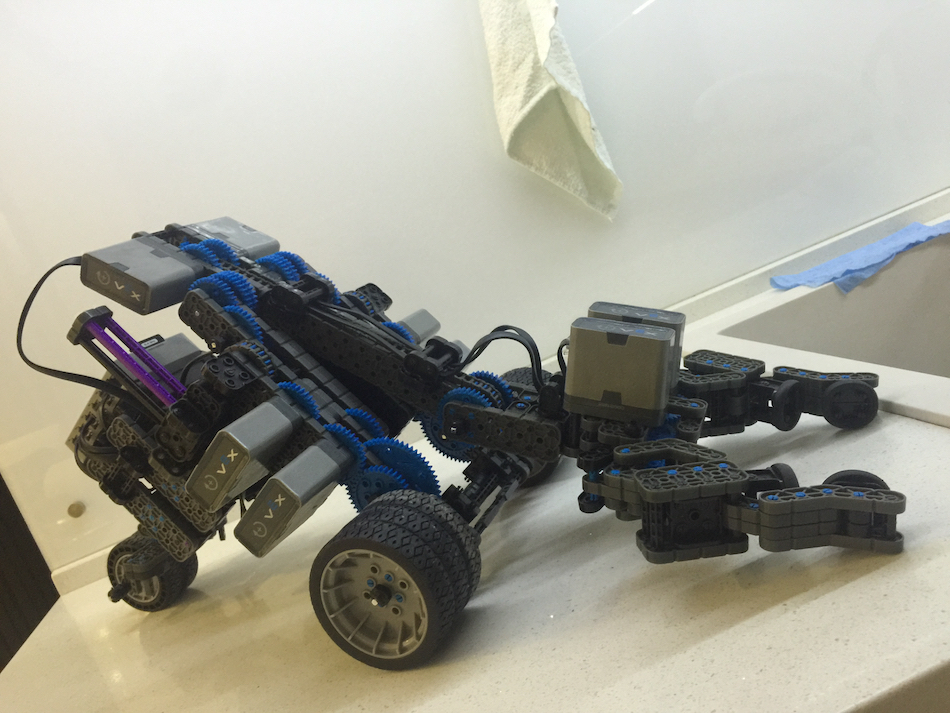 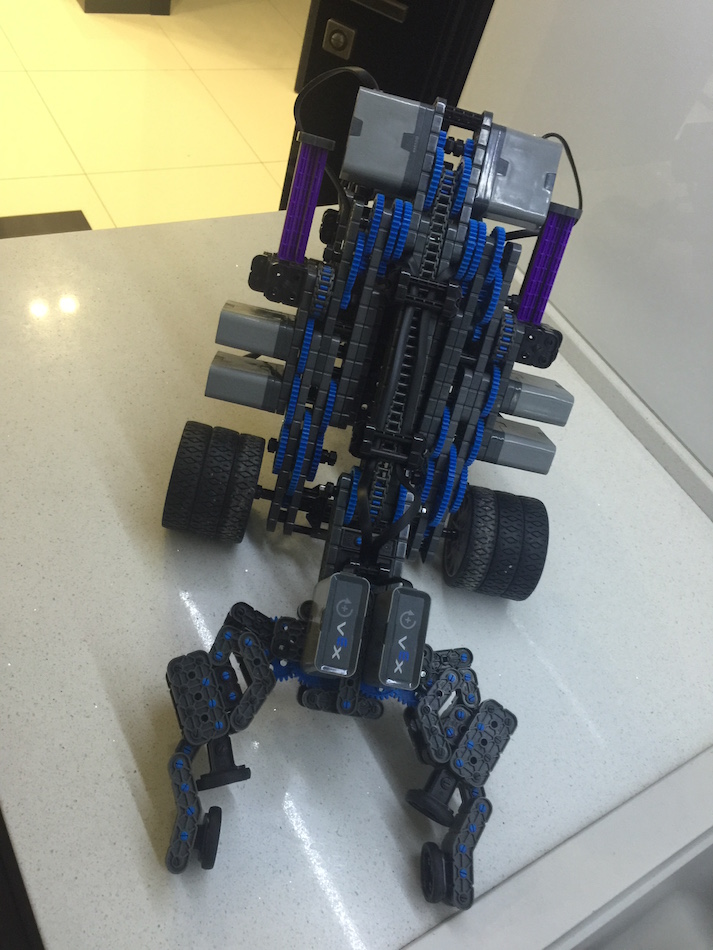 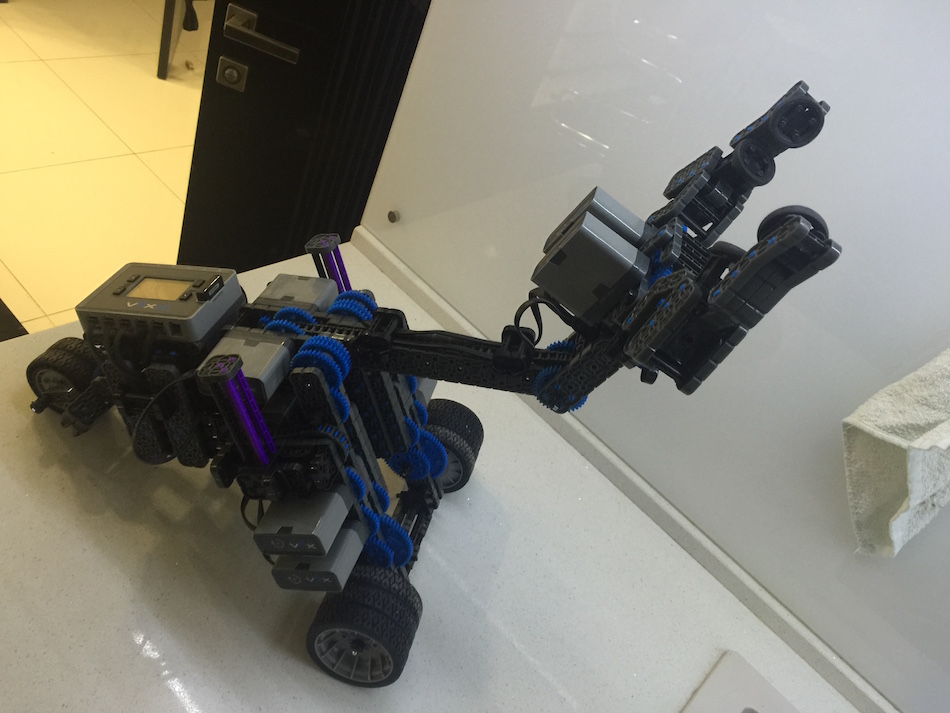 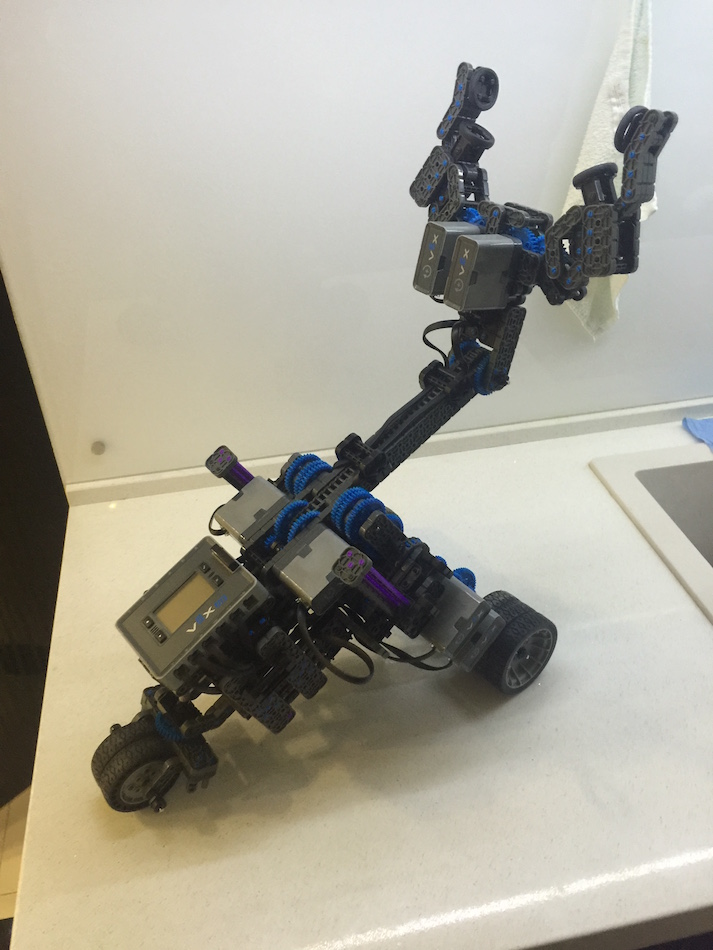 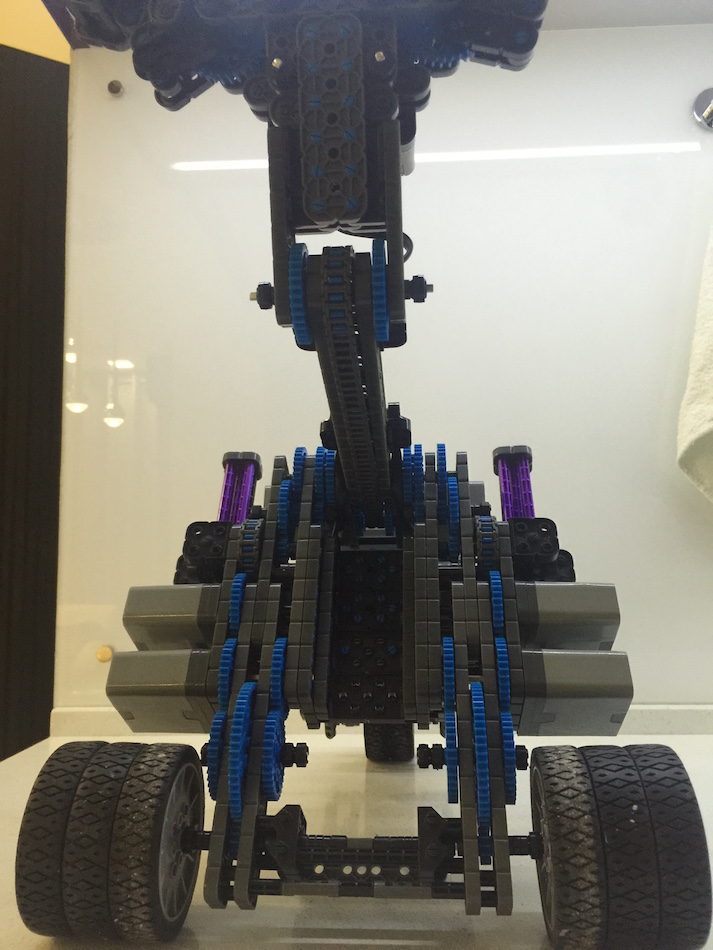 I think your clawbot build is outstanding. A bit heavy, but that’s kind of like most of my bots! I love the many points of articulation and the symmetry. Cables are well placed, and the whole bot looks like you spent a lot of time on it. Your dog seems to like it, too

Thank Vexatron, in fact, the creation of the robot took 3 days, to think I had quite a long while waiting for the designer shipping to Russia, and the day went to the parsing and replacement parts as in the first version that I introduced burst gear when lifting the weight of more than 400 grams and I it was necessary to strengthen the structure, add a second belt and modify management. Then I program the robot secured by high loads. I would like to add a lot of sensors to automatically capture the definition of range, etc. but I did not have enough ports on the asked question about the connection of the two brains in a single system, it is a pity that the developers have not considered it, as well modkit program can not copy blocks is very tiring, there is still a wealth is not weak gear. But in general I’m very pleased with the designer. Who is developing a model of motorcycle drifting))

Unfortunately I do not know english and translate it via Google, I forgive ignore the lexical dosing errors … 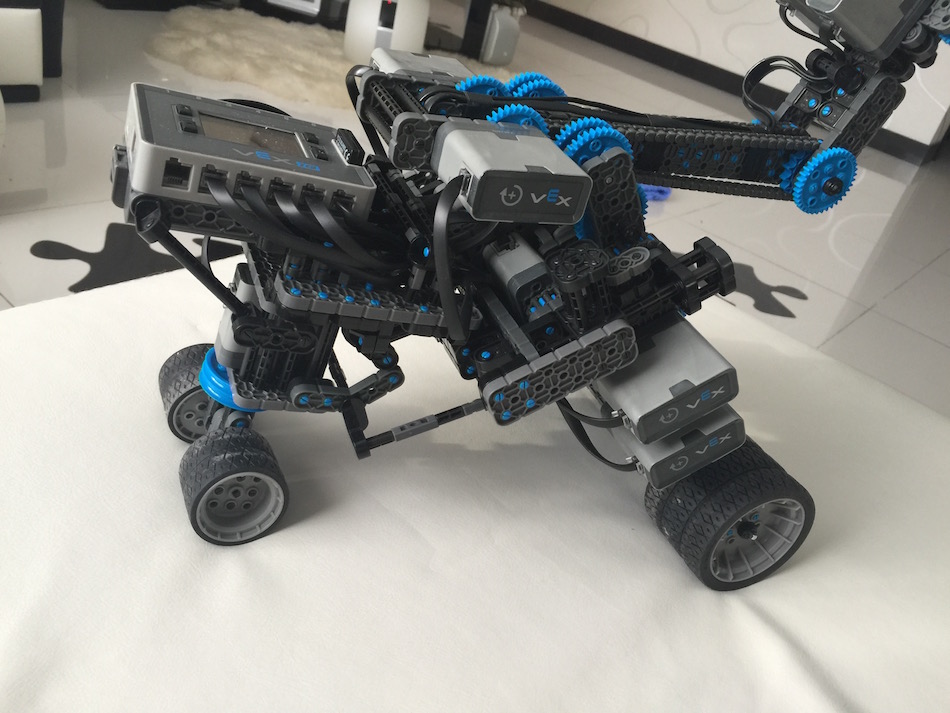 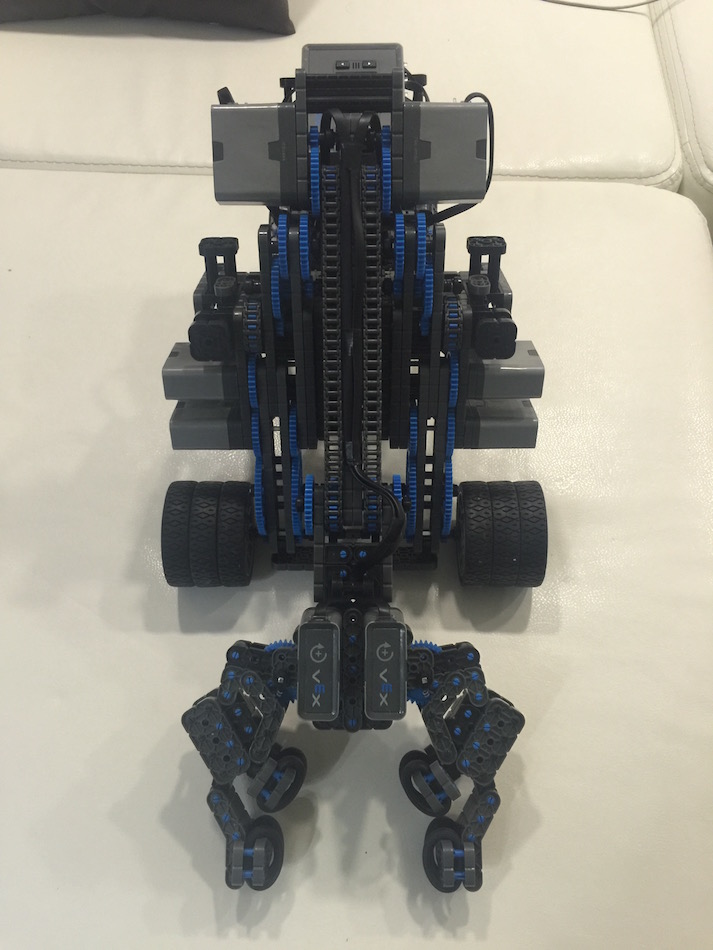 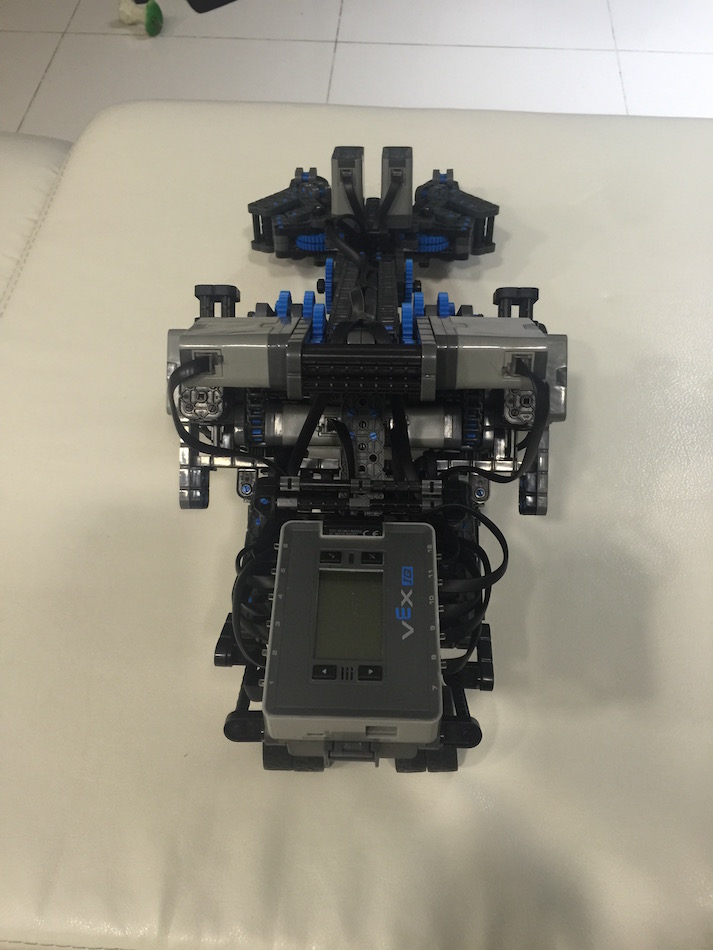 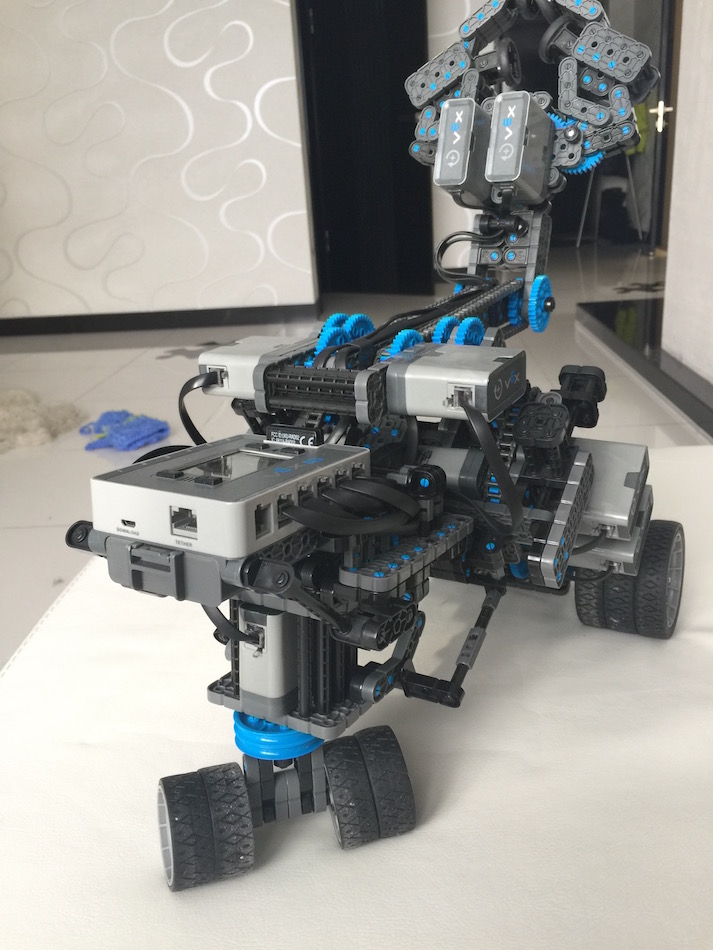 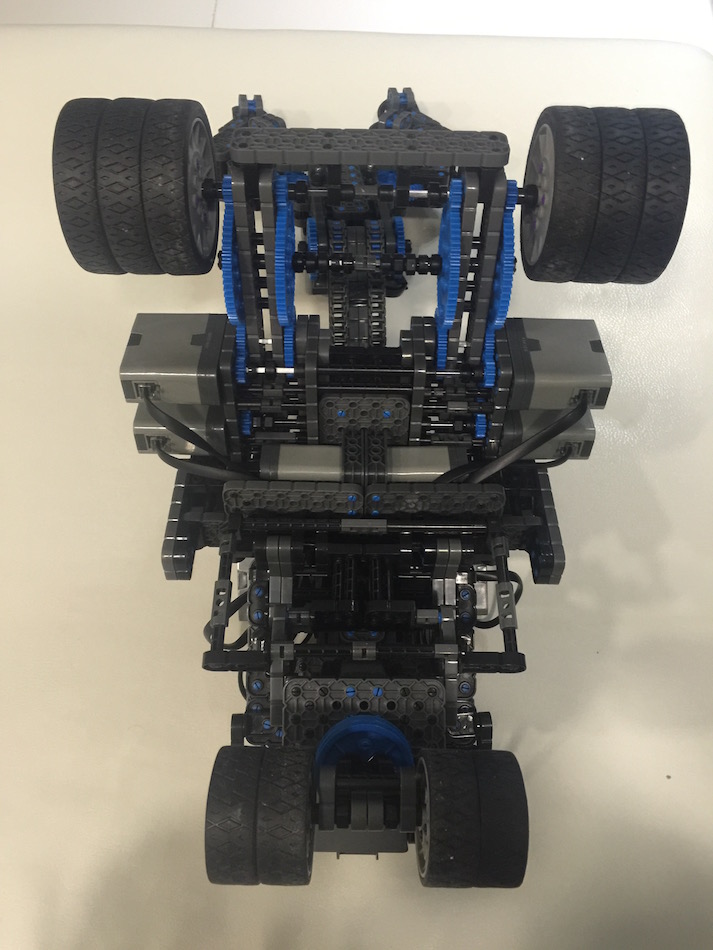 By the way about what you said about the unusual models in the space I created a model but unfortunately it was not successful as the armored caterpillars did not give a good grip. The essence of the model has to overcome various obstacles by means of an adjustable suspension. 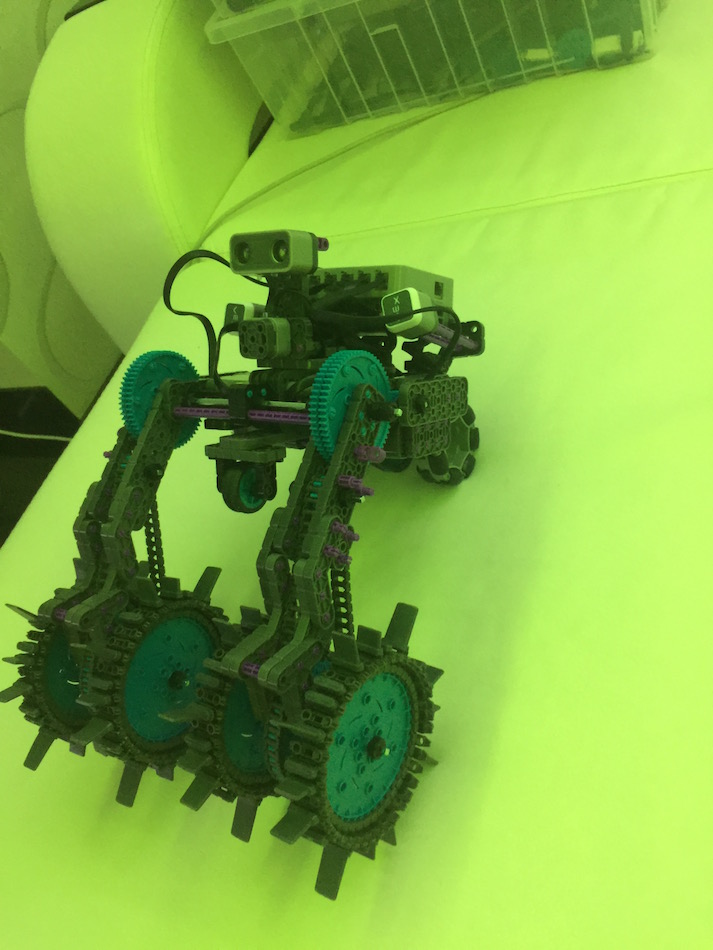 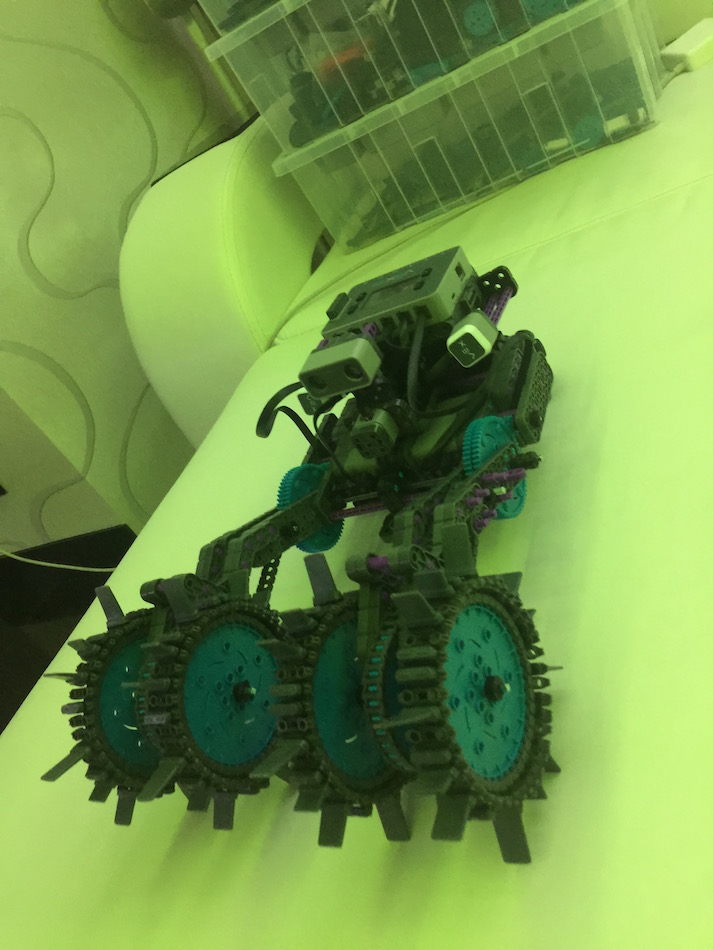 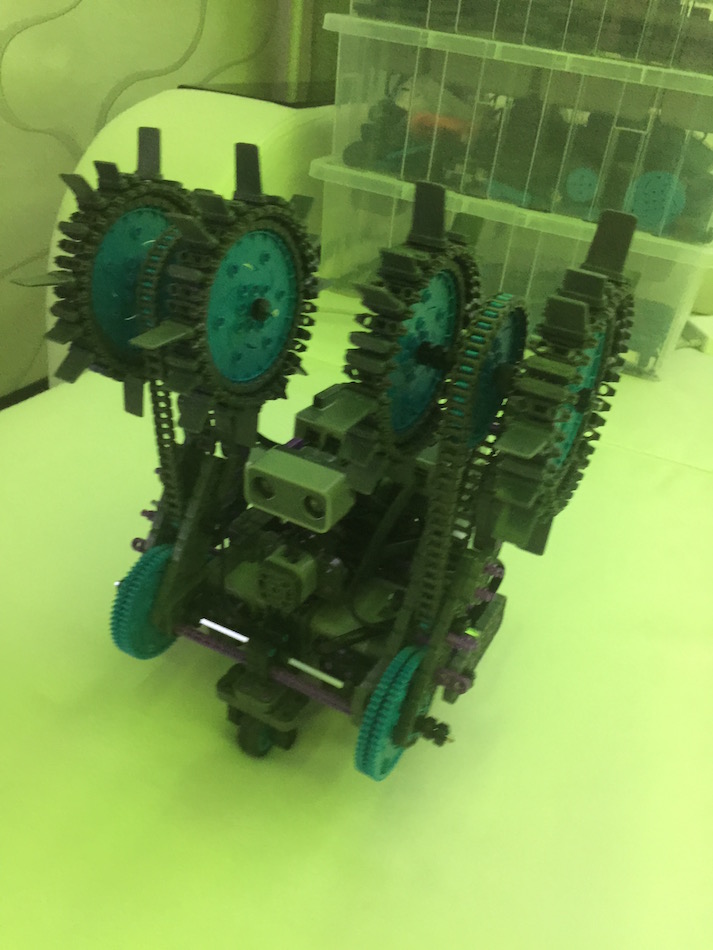 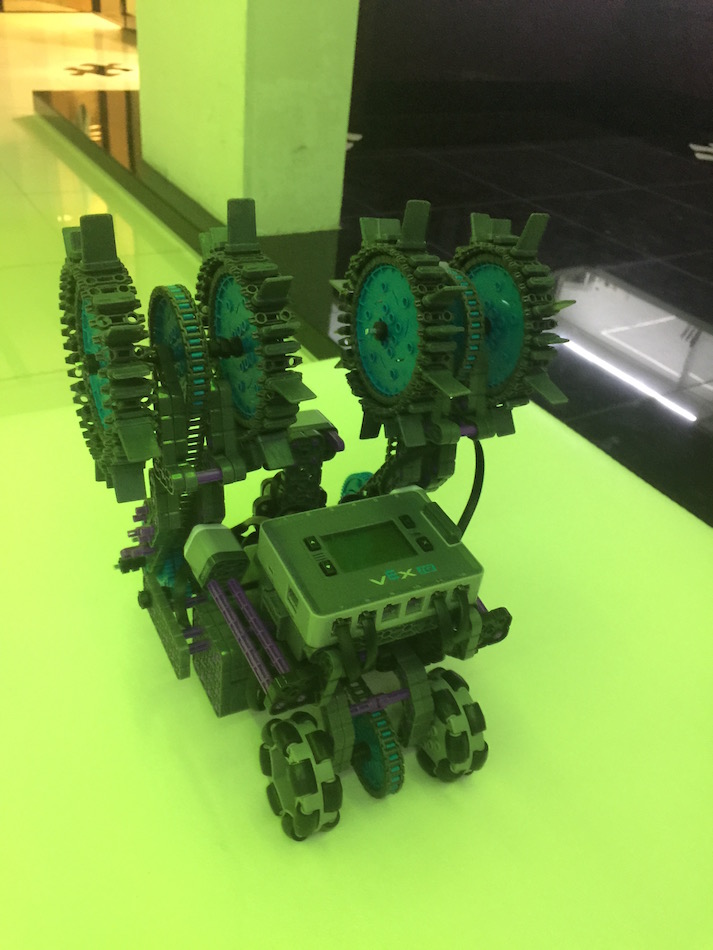 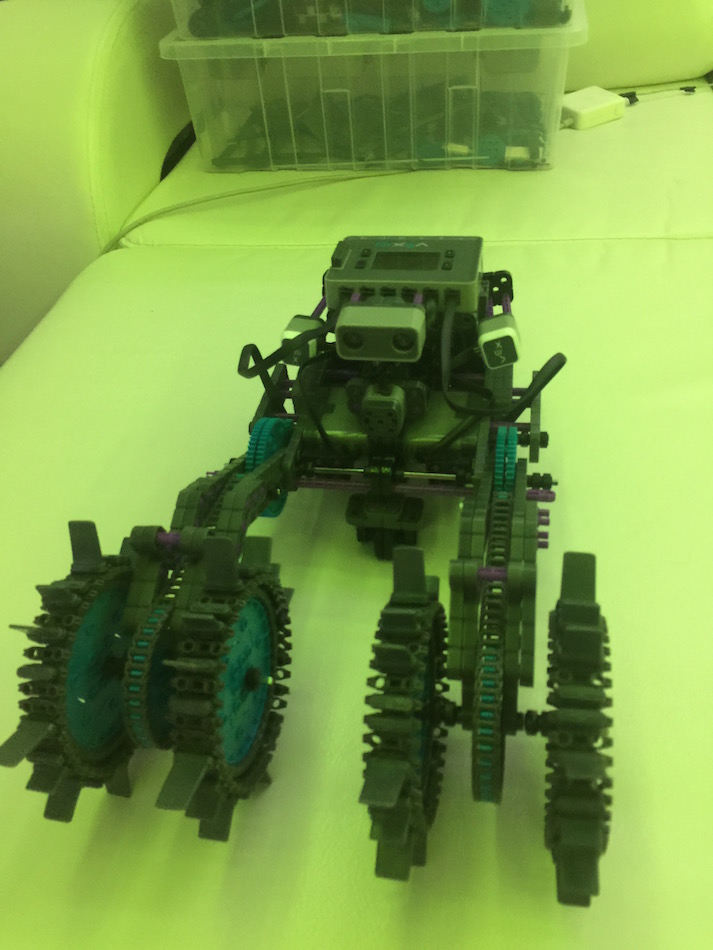 You can see my old model. When I first became acquainted with the VEX))

The very first thing I ever built with vex was a type of road grader. I didn’t have enough parts or experience with vex back then to model it very well. I only had four motors to build with, but the blade and the front wheels could turn. I even managed to build it so the front could angle from side to side. (It’s called crabbing, because the wheels are offset like a walking crab.)

After that, I built a steering system that could turn left and right as well as tilt at an angle the way a real road grader’s steering works. It wasn’t all that great, but I learned a lot back then about how to put different parts together!

My newest bot is a sample for my students. (We like to create our own challenges.) This latest bot can pick up vex balls and either keep or launch them out of the challenge field area based on color. As built, it throws the balls about 3 meters. I can adjust it to throw them about 6 meters, but 3 meters is far enough to clear the entire field. Right now we are waiting for a vex shipment of the colored balls to complete the challenge.

I can post more on this if you’re interested. I may eventually post a photo of the practice field and a copy of our rules, but I’m not sure anyone else would be interested. 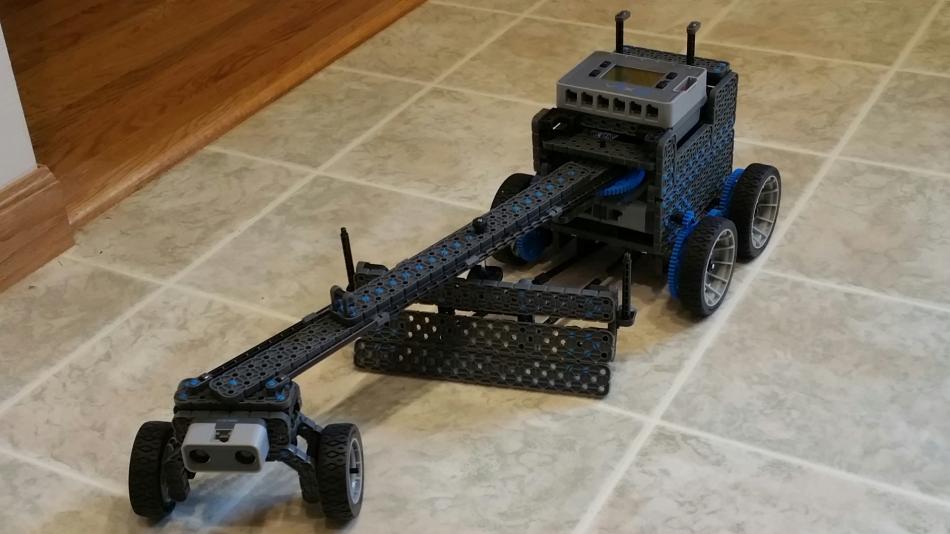 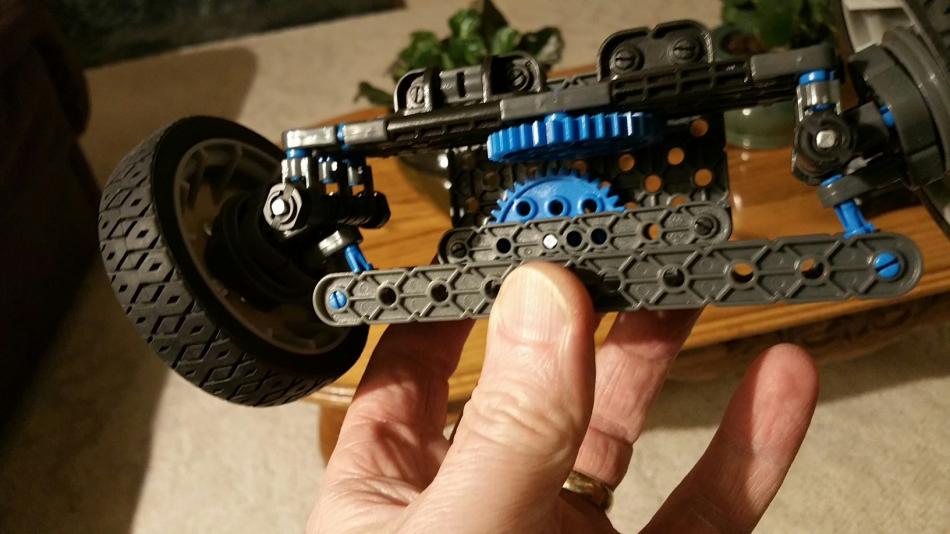 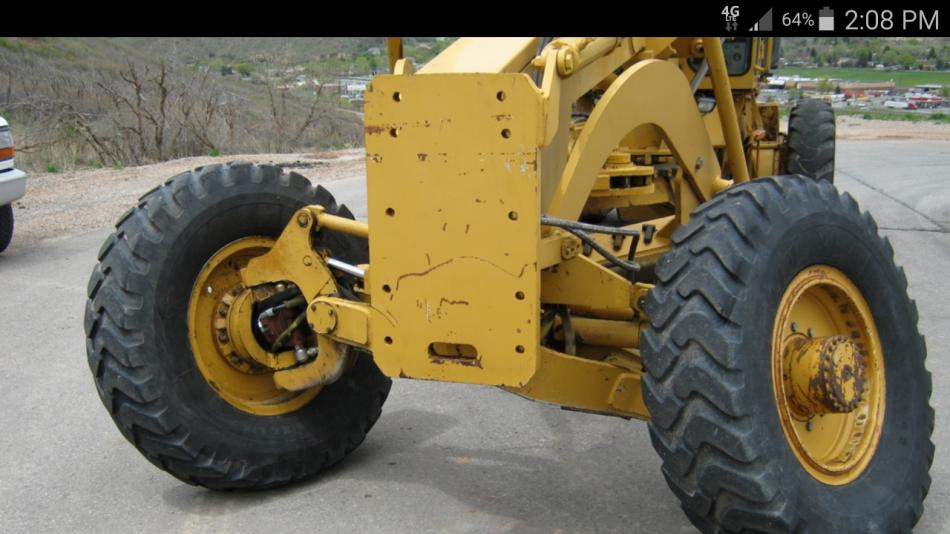 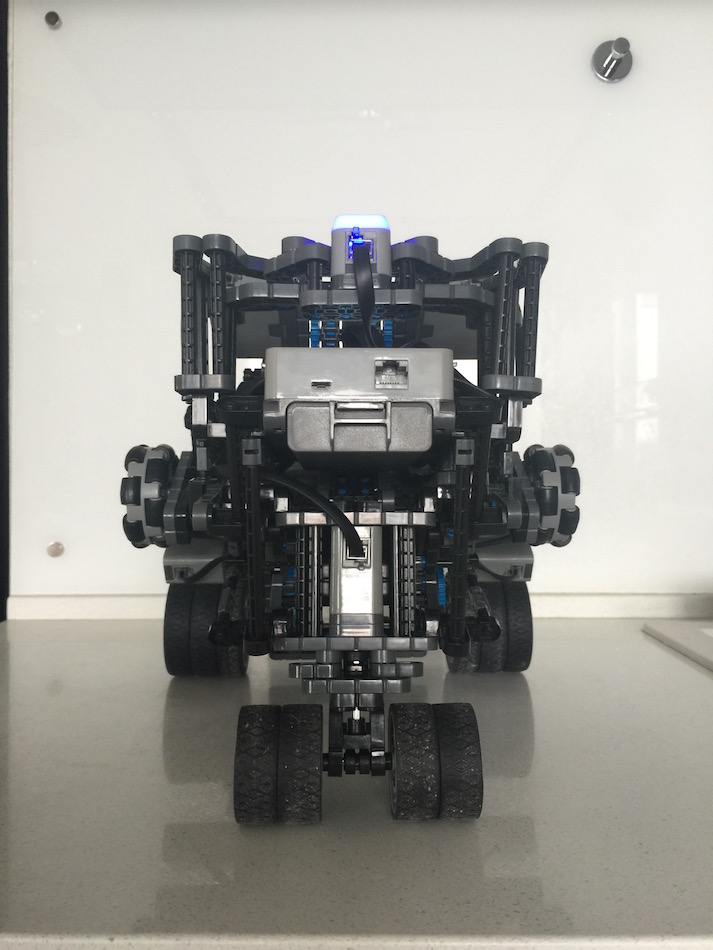 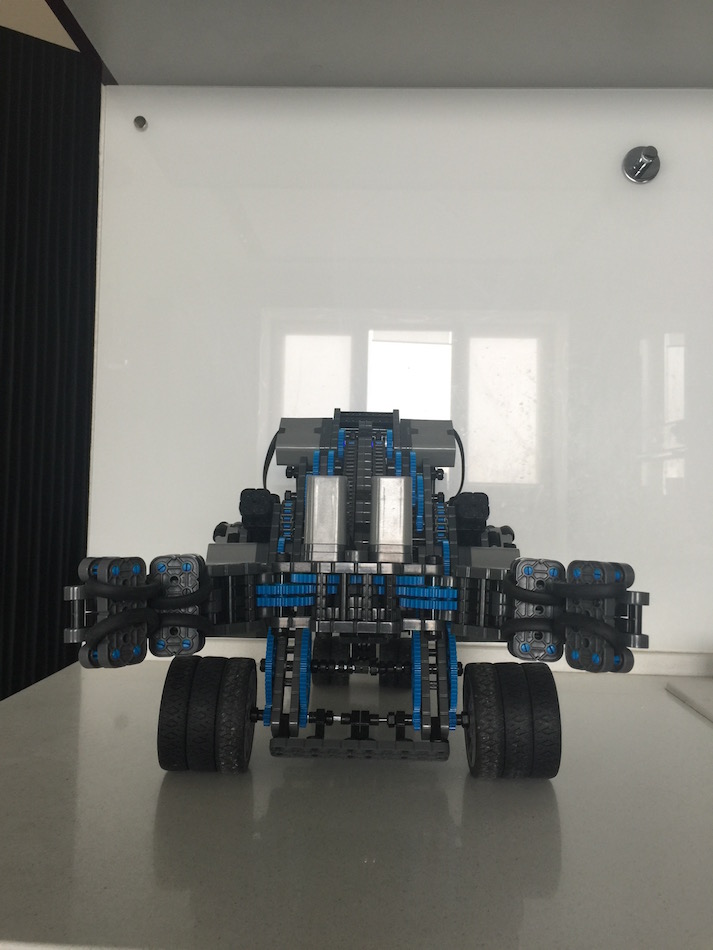 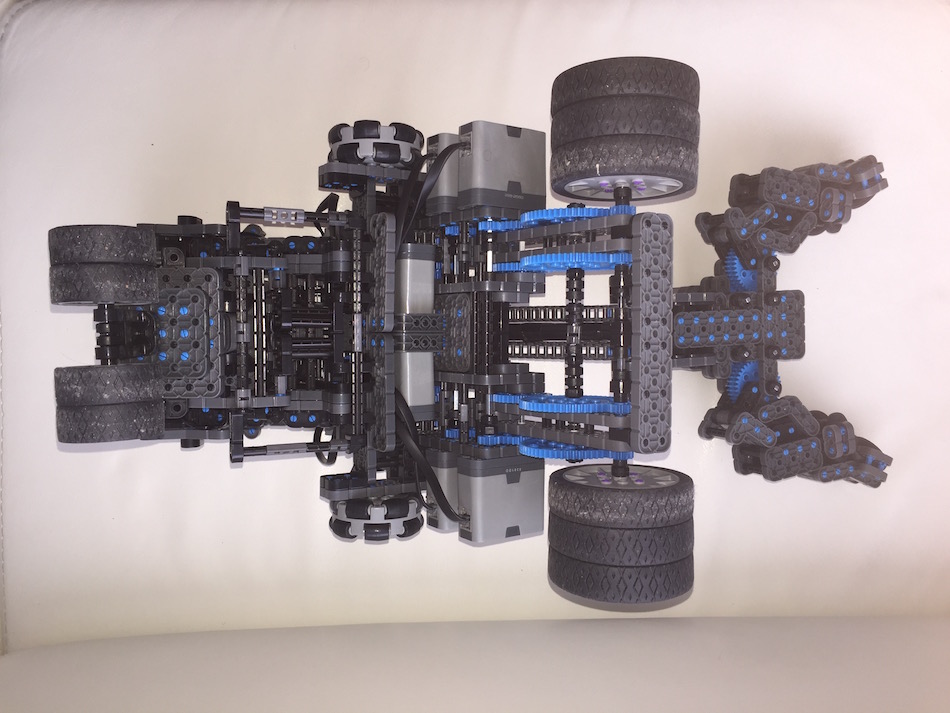 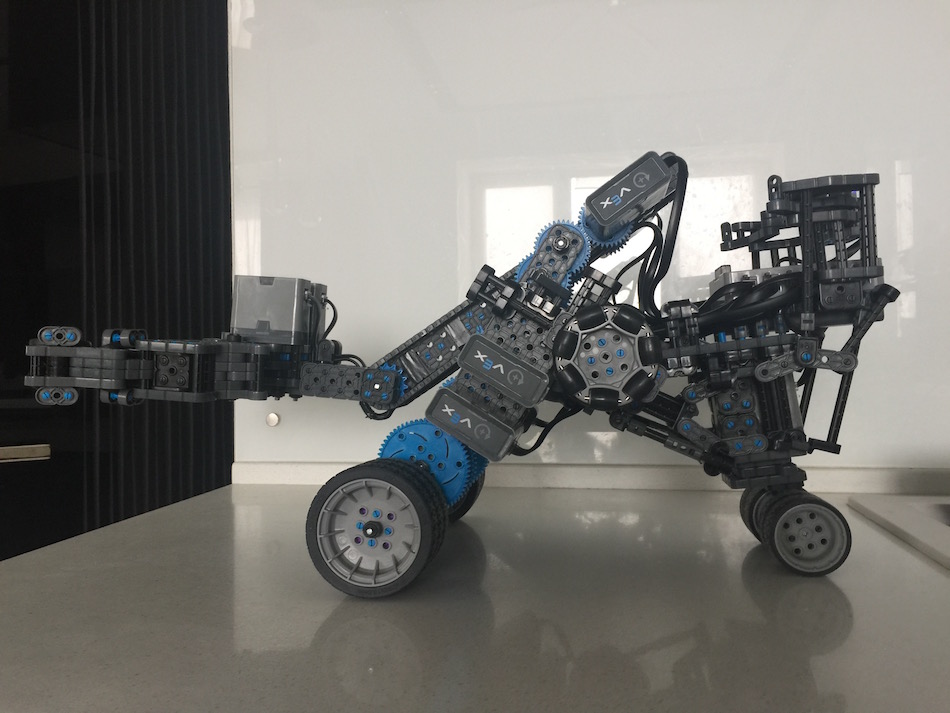 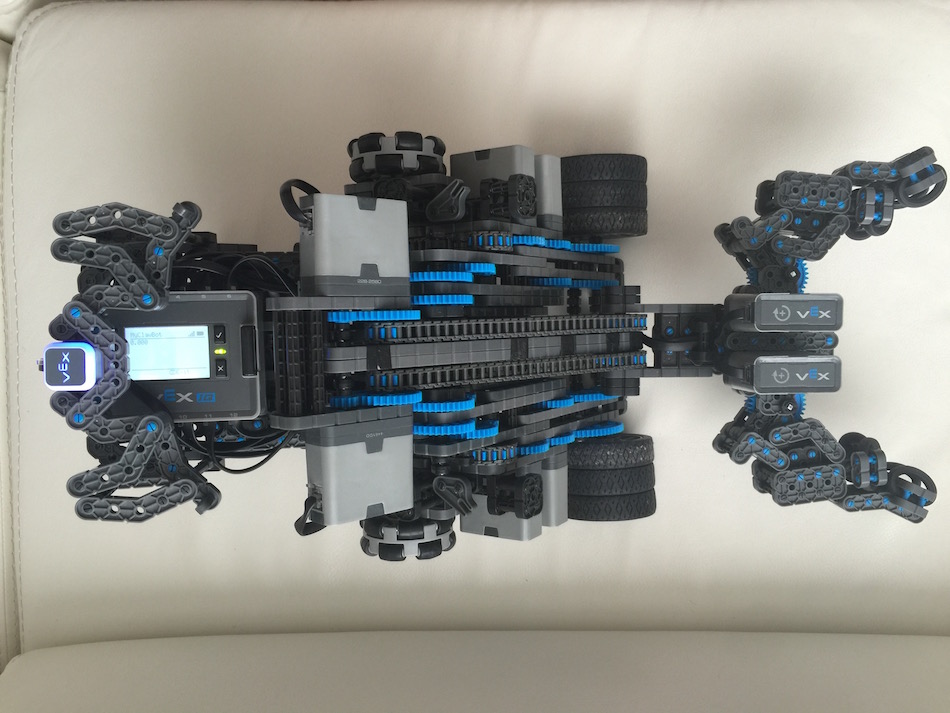 Some nice revisions to the build, Valeria.
The new design looks more stable, and the height (ground clearance) is much better. I really like this version for a claw bot