Need a way to open anti tip in all directions

Ok we have around an 8 foot robot right now and it likes to tip backwards or forwards I have attached anti tip metal on the front and back but can’t figure a way out to open both. 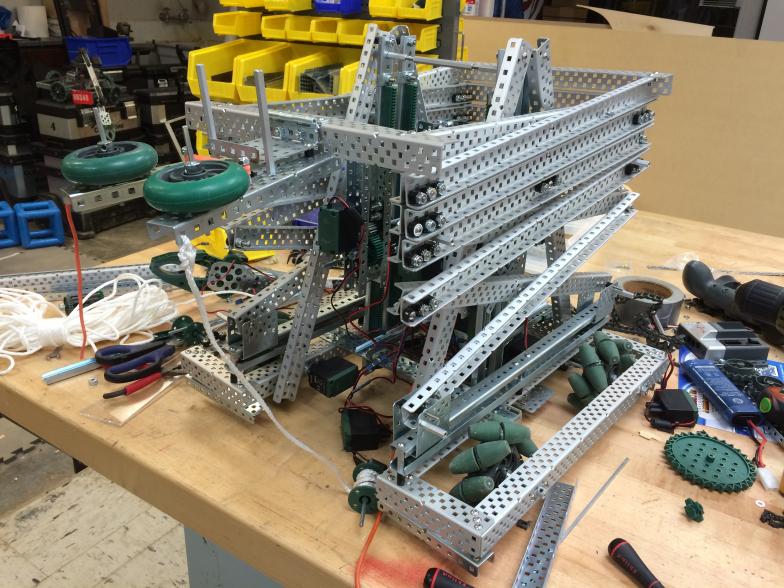 Do you have any pneumatics? That would be the easiest way to release them. You can also use elastics and some sort of friction with the mat to hold them, and then drive to release them. https://www.youtube.com/watch?v=bPSESG6tGSA

Classic center of mass issue here. Adding stabilizers can be done to move those tippy points further away and increase the contact patch of the robot. But making more weight on the bottom can lower the center of mass as well as reducing weight further up also help reduce the tippsies.

Don’t just think of the statically bound robot to the floor for you center of mass but the torques to the touch points that help prevent tipping - the wheels. Reducing acceleration and de-acceleration can also reduce that torque force when your are really tall.

I will let you do the kinematics of the torques on your own.

Since you are mechanum wheels, you also have to worry about your left/right tipping too. So do the math there too.

How to find the center of mass? Easiest way is to CAD the robot in inventor. But there are other tricks too but I think the CAD method is almost the easiest in this case.

Now how to stop the tippsies? Look at Marco’s drive out wheels. You could do a flip down version of them as stabilizer wings and lock them in place possibly without any motors at all. Just use rubber bands, something to hold it at the start of the match, and put some little omni wheels at the ends. They don’t even need to touch the ground at first - just when you start tipping.

Sorry for the late reply, Kevin_Team472 you gave me an awesome idea with the sliding pieces that would work awesomely. I will post it once we reveal our robot sometime soon.