its a large chassis and wheels,plans for camera ,led lights,and sensors,its a little slow,would putting in393 motors vs the old 3 wire ones make a difference ? more speed power ? thanks guys 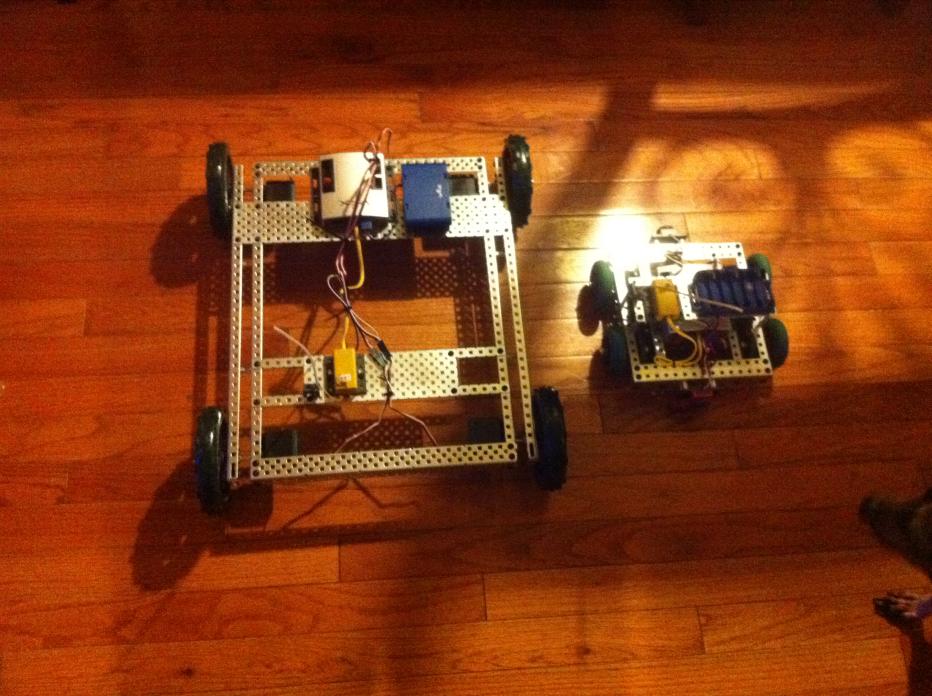 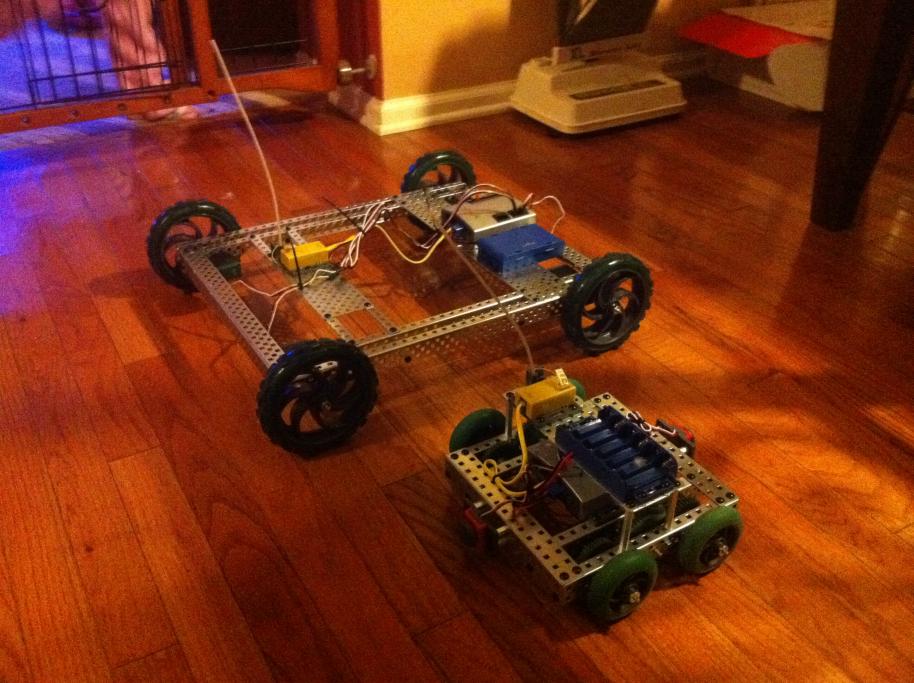 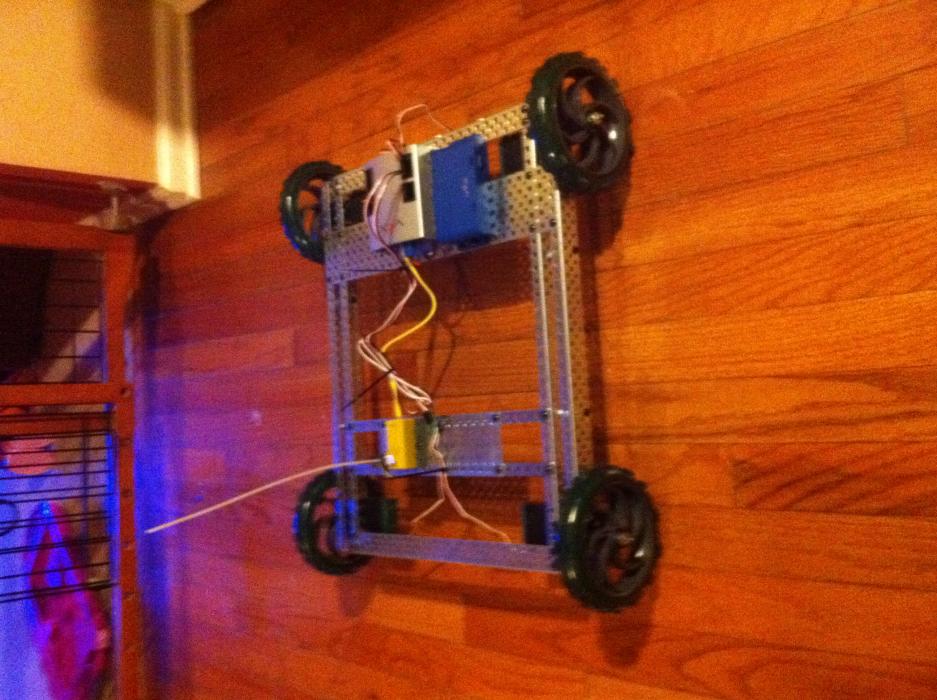 393s don’t spin faster than the old motors, so unless you’re having problems with torque (unlikely since your robot looks fairly light), they alone won’t increase your robot’s speed. However, you can switch the internal gears on 393s to high speed or use external gears/sprockets to increase speed.

One thing you might want to consider is supporting your axles on both sides. Right now your wheel axles can bend, tilt, or become otherwise misaligned because there’s no metal on the outside of your robot to keep them straight. Most teams consider this an unsafe building practice popularized by the ubiquitous protobot. But keeping your robot like this certainly won’t kill you.

With a robot that light, 393s will provide little to no significant increase in performance.

One thing you may want to do is adjust the wheel configuration on the larger robot to allow for easier turning. Right now you’re dragging the wheels sideways a lot when you turn. This may not be a problem because of the weight of the robot, however.

Yeah, so 393s have two gear configurations (you have to open the motor to change gearing). In the packaged configuration (high-torque), the motor’s free speed is the same as the old 3 wire motors, 100 rpm, but it will have around 60 percent more torque.

You might be able to get some extra speed with the 393’s if your current motors don’t have enough torque. 100 rpm on 5 inch wheels corresponds to around 2.2 feet per second (free speed, not entirely realistic as it assumes no torque on motors). If you upgrade to 393’s, the increased torque **might **help make your robot faster. Like Adam says, changing the internal gears to high speed will most surely increase your top speed, though acceleration may be lower.

I also urge you to doubly support the axles/enclose the wheels with structure. This will also give you more room/better opportunity to modify gear ratios or perhaps use sprockets if you want to tinker with finding an optimal speed for your bot.

how do i go about giving more support ? i didnt want to use gears because wouldnt the wheels need to be closer together ? and i was gonna switch out the gears on the 393,i do plan on increasing weight ? any suggestions on implementing gears or more solid axle situation ?

ok,so i am gonna put the wheels inbetween the side rails instead of on the outside,this will make it flex and be more stable, also do you guys recomend bringing the wheels in more,so i will be able to use sensors on the bumper ,which will now be in front of wheels ?

i meant it will not flex and contort

With such little weight, axle support is not necessary. However it is good building practice to support axles on both sides of the wheel to prevent excessive torque on the axle mounts.
Moving the wheels further inward on the larger robot will make turning harder.

Here’s the chassis we are using for middle school demo’s and as a platform for the programmers to use. Similar to yours, built from standard parts with (almost) no cutting required. 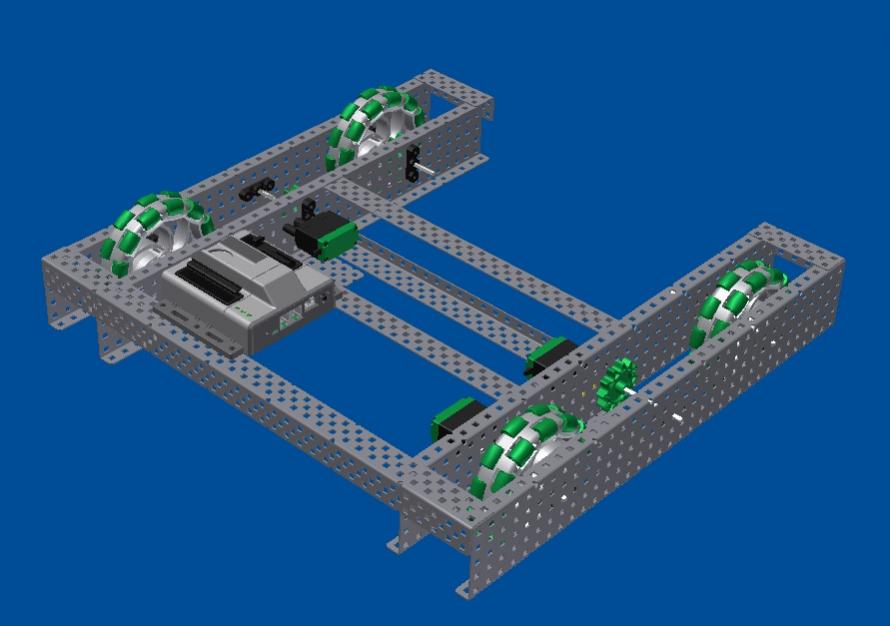 ok i did a quick redesign,put wheels in a tad ,and put them inbetween rails,supported on both sides,seems way more sturdy and more strength,i may still swap out for 393, and regear the motoirs for speed,and some sensors,camera,light, thanks guys 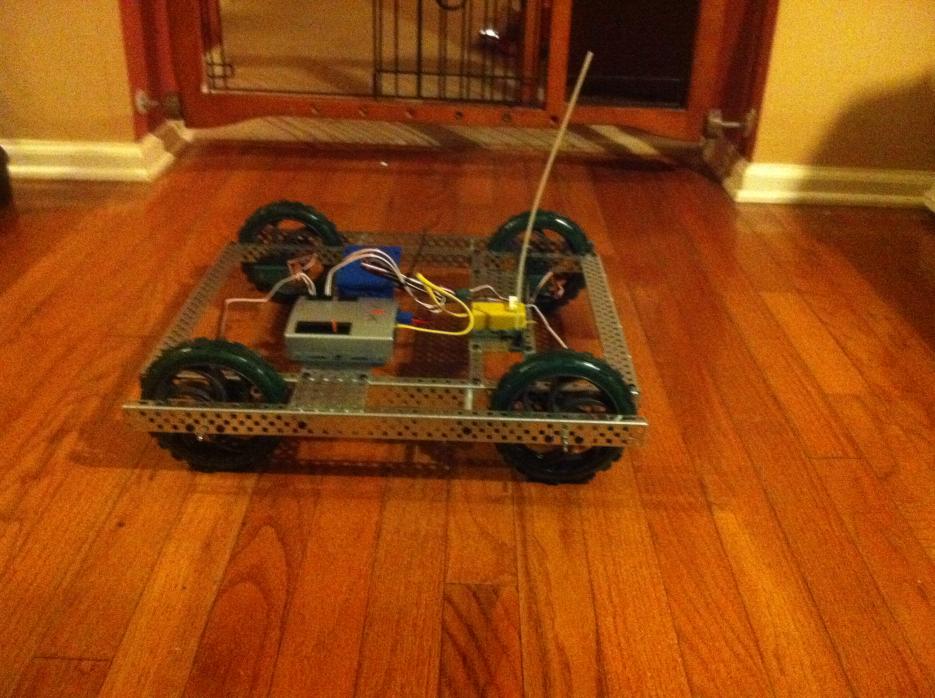 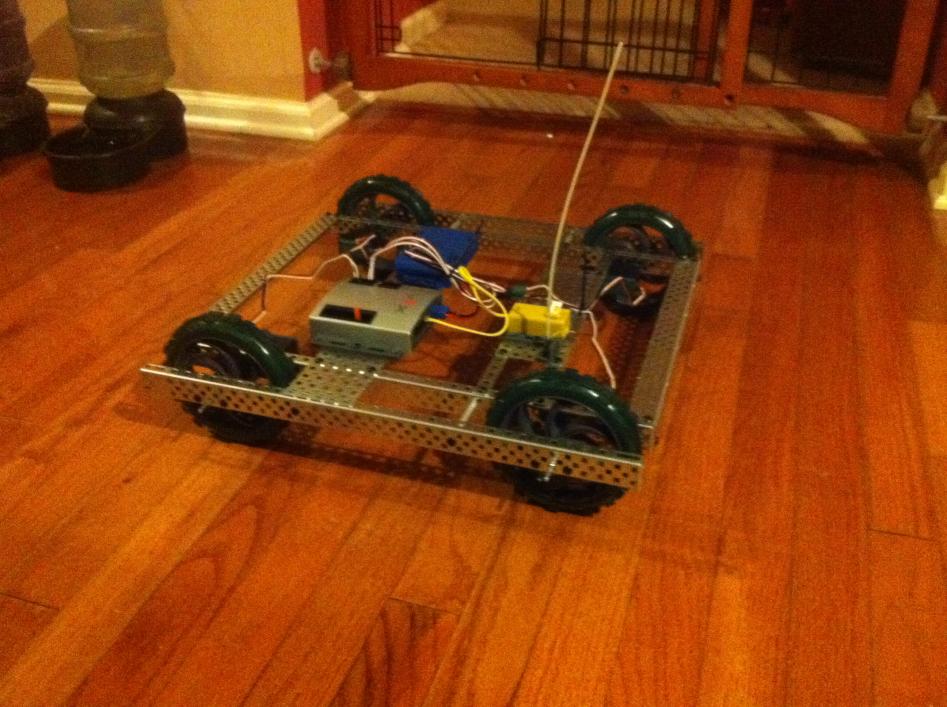 Another thought – if you have long C-channel or angle bars, those are sturdier cross-supports than long plates or 1-hole-strips in series with standoffs. However, the sturdier bars add weight as well.