New to Inventor for VEX

I just recently downloaded Autodesk Inventor 2017 to work on making CADs to help the team out with ideas and for the notebook. I understand how the iMates work and how to use them, I’m just curious to know any tips for building robots faster. The quarter of the base I built (should be attached somewhere on the post) took a little over an hour and a half. I know that just getting used to how the software works over time will help tremendously, but if anyone has some other tips and/or tricks they know, I’d love to hear them! Also, big thanks to Jacob Walter for the CAD Library! 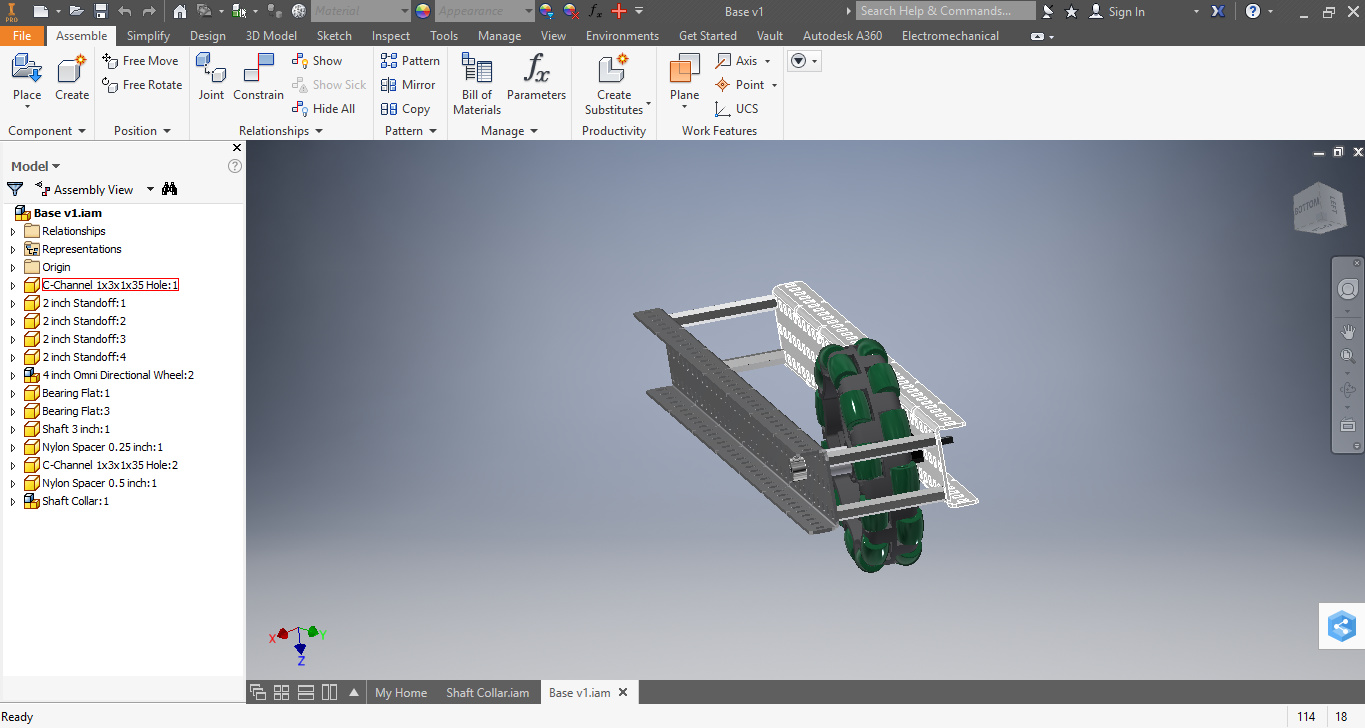 The more you do the faster and more efficient you will get. As for speed, you will probably have to deal with long build times. If you want to invest in a 3D mouse, navigation will be easier, which might save time, but you will still deal with long build times. As a suggestion, if you want to help your team out with simple ideas, sketch up is a much better tool. It is a lot simpler, faster, and still gets the concept across.

I’m not an expert in Inventor but some of the features I like to use for speeding up my assemblies are creating subassemblies (demote) and using the mirror feature. Both features help when designing symmetrical drivetrains or towers because you only have to do half or a fraction of the work.
I second @Mystical Pie because a mouse (doesn’t have to be specialized) with a scrolling wheel and 3 buttons definitely speeds up the process. I lost my mouse and using Inventor without a mouse when you’re used to using one can be frustating!

This is what we try to do also. Mostly though, the speed just comes from practice. Once you know the software really good the clicks come more natural and happen much quicker.

Quick tip: you don’t have to use the constrain menu for basic things. If you hold alt, click a surface and drag to another surface Inventor will try to figure out which constraint you need (this is even without iMates). Works really well when just mating things…no need to pull up the constrain menu.

You already have some really good tips given above. All I have to add is to be very careful with saving your assemblies, and know which parts you move or delete. So many times, when I first started using Inventor for VEX, I would mess around with part files, which would completely mess up my assemblies the next time I opened them. I’ve wasted so many hours just getting files back to the way they were.

Inventor likes to throw a lot of dialog boxes at its users sometimes, but it’s very important to read and understand them to prevent messing up your files! It doesn’t necessarily speed up the process, but it sure saves a ton of time in the future.

Also, if you haven’t already, take a look through some of these tutorial videos. It takes an hour or two, but you’ll learn all the basics, from iMates to rendering animations. http://curriculum.vexrobotics.com/curriculum/intro-to-autodesk-inventor

Glad to see you’re making good use of the library!

I set hotkeys for rotate, pan, and zoom. I don’t like mirroring because it creates extra parts, but if you pattern something like bearings or wheels a set distance, it saves you like 3-4 constraints, and it doesn’t add files. Another thing I do is offset my constraints rather than making new constraints if I mis-constrain something (if i’m really lazy)