here we are 6 weeks after Worlds and there are very few details out there.

I like to think that part of it is people really don’t know what exactly they want to do this season, to a point where they don’t really have anything to put out because they’re still designing and figuring out what they want. This is the exact opposite of change up, where instead of people figuring out the meta after 3 days, we’re 6 weeks in and nothing definitive has popped up yet, which is a very good thing imo.

Not to mention a lot of the school teams probably haven’t gotten in to their buildings yet, so that might be part of the delay.

I will say (and prefaced with only surface-level experience) that the FRC culture (or at least numerous high-level teams) seems much more open than Vex. I recently posted a YouTube link from Cheesy Poofs (Team 254) on motion profiling. As a team, they seem committed to opening much of what they do at the end of the season (including code), and commit themselves to improving upon that the following year. Maybe its the result of their compressed scheduled. From what I’ve seen, the open source WPILib that is available for FRC/FTC teams is light-years ahead of anything available to Vex. The Vex culture seems far more along the lines of “We went thru all this work to discover X, so you should too”.

I’m not trying to make a value-judgement, but instead making a comparison in the cultures of the two/three competition scenes.

While probably impractical for any number of reasons, I do often muse about taking Vex’s “student-led” core principal to logical extremes. What would happen if teams presented to peer judges, for example, rather than EP-found adult judge volunteers?

Is the ring plunger/needle pneumatic? My team really wants to make a needle/plunger for our dr4b, but we cant find the right intake that works. We want to pick up rings efficiently, be able to put then score them precicely, and not use pneumatics because we dont have any.

How many times are you able to release your pneumatically powered claw?

Bro, how many kids are gonna go full on Gordon Ramsey.

Bro, how many kids are gonna go full on Gordon Ramsey.

Wait,what, as a judge we can go full Gordon Ramsey? Oh wait most of us do that, just watch episodes of Masterchef Junior. He is so nice when he talks to the younger chefs.

Go insane on the seniors though. I’m a senior, I can take it.

Go insane on the seniors though. I’m a senior, I can take it.

Be careful of what you asked for.

Yes, i think the ring plunger is pneumatic from what i saw in the video. Also, it is possible to use motors instead to power it.

Certainly! It may not be the most efficient use of a whole motor, but you could for instance use a winch to pull on the polycarbonate strip instead of actuating a piston to release the rings.

We want to pick up rings efficiently, be able to put then score them precicely, and not use pneumatics because we dont have any.

As others has mentioned - you can certainly modify it to a motor.

Some other resources you can take a look will be to go back to Round-up, look out for 44 and 8059 - both similar needle intake, but one with pneumatic, and then other with motor.

@meng Yes sadly, Dylon and I are just too busy with college / grad school to handle a full-on VEX team (either as competitors or mentors). As far as I can tell, The Resistance will remain in retirement.

Since controlling neutral goals is an important part of this year’s game, we reasoned that once we pick up a neutral goal, it’s in our best interest to never release it.

Hey, I was impressed by your design, turns out others are too. Walked into the weekly build session last night and there are two teams that had the video up trying to take in the nuance of what you build. Since we are not a big pneumatics user I’m excited to to see what they come up with for the ring snork.

Thank you so much! That is really helpful!

Is there any chance we could get a close up on the intake? I just want to see how it works 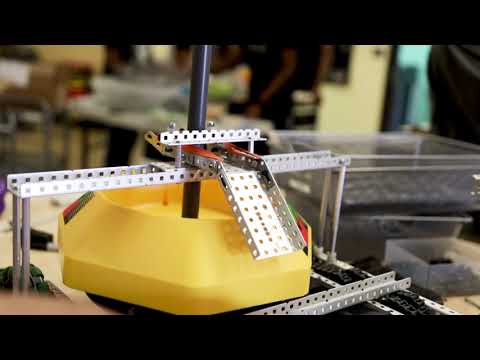 I really think this rotator is almost at the game-changer level.
great job guys (especially so early in the season) !!

Your robot is a potato! And not just any potato, the rotten slimy kind that’s gone bad in the ground for months!