(Not so) Quick question about drive gearing

I’m unsure how to proceed with this. I’ve attached a CAD of the two options I’m considering. The upper design uses torque motors and gives a 1:2 output. It would be easier to maintain structural integrity of the frame while still staying light with this design. (standoffs) The wheels are also slightly closer, lending to slightly faster turning. (relative to the gear ratio) On the other hand, the bottom uses turbo motors and gives a 1:2.4 output. I’m liking the higher ratio, however it will be harder to come up with a light way to keep the base stable. However, the differentials will have far less torque on them, meaning they are less likely to break. I’m truly at a crossroads here. What do you guys think? Thanks in advance. 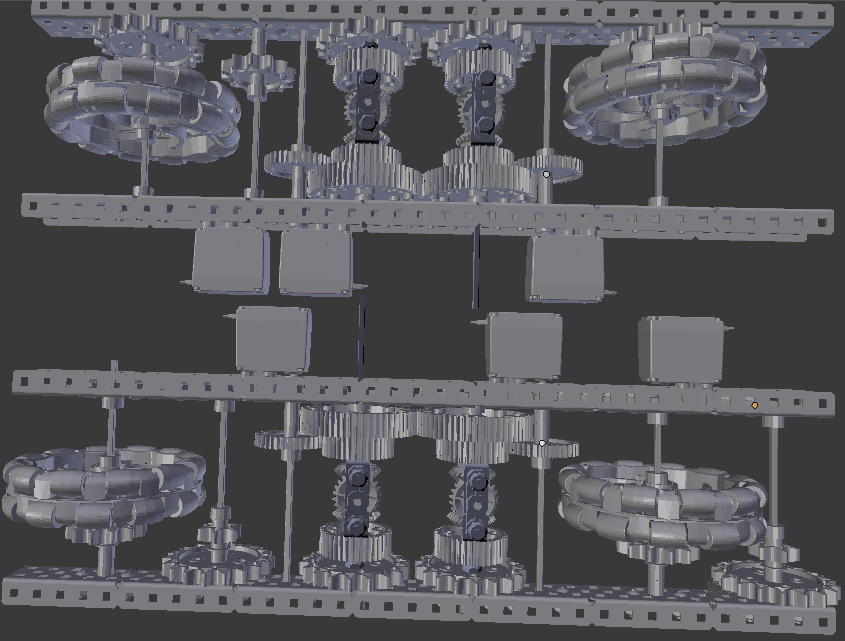 First of all, great CAD designing. I would go with the faster ratio because in an actual match you want to be able to be fast on the field so you could return game objects quicker. But of course you want to be light so you don’t stall out and lose the match. Good luck.

I think the 1:2 gear ratio might be better. Because of the smaller field this year and the nature of the game, turning tends to be more important than straight speed. Of course you’ll be running a slower drive in general, I think structural stability is kind of important too.

First of all, great CAD designing.

Thanks! When I get the forum’s seal of approval I’ll make an animation of the whole thing working and post it on my transmission reveal/teaser thread.

Turning tends to be more important than straight speed.

Very true, but I meant turning speed relative to the gear ratio. The turning will be faster on the turbo drive. However, the switch between turbo and torque drive won’t take away too much turning speed. (not as much as the straight speed) Should have clarified

I think structural stability is kind of important too.

I’ve been thinking of ways to combat this; I’m pretty sure it can be just as stable. But it will take a bit more metal.

I guess if you decide to go with the faster ratio, and you also want structural stability, just bracing your robot in the correct spots using minimal aluminum channels, should do the trick (so light weight, structurally stable, and speed). You could say that this year its just half the field, but in my opinion I think speed is important because in the past years, its always come down to speed. For example, last year, it was who can shoot really fast and clear the field really fast. Or in skyrise, it was who could finish their skyrise the quickest and clear the field. So i think this year, speed won’t be a huge factor in the start of the season, but as the season progresses, speed would be a huge factor because teams would want to clear the field fast and efficiently and the faster you do it, the more you can out score your opponents. Not only that, speed will also help when you attempt skills because you are limited to one minute driving and one minute programming.

@Mr_L_on_Yoshi Thanks! When I get the forum’s seal of approval I’ll make an animation of the whole thing working and post it on my transmission reveal/teaser thread.

Can’t wait to see it!