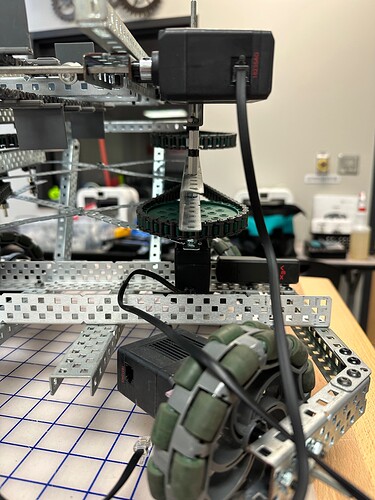 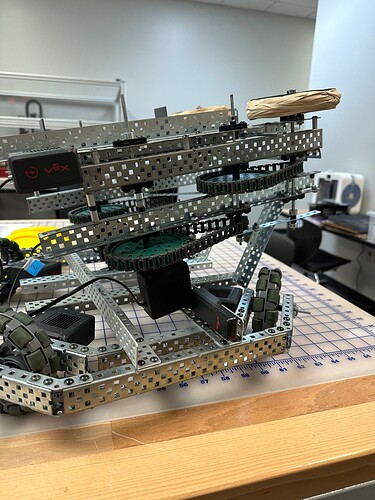 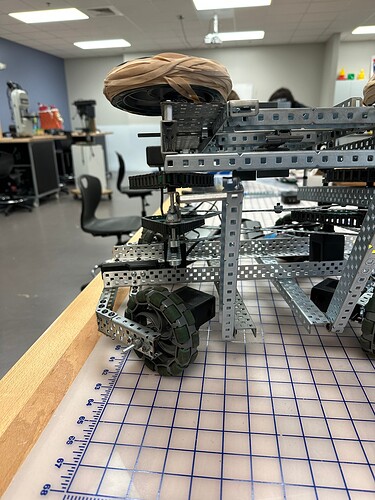 Also, the chain has friction, much more than gears. I would recommend a 7:1 gear ratio with a 600rpm motor personally.

chain with as little bracing as you have and that is that tight will tend to cause friction.

I would recommend switching to gears. They are better for this application.
If that is not a possibility, BRACE BRACE BRACE.
Useing 1Xs are not ideal. 1x2x1 c-channels are ideal.

Your bearings probably aren’t aligned. This causes the axles to rub against the bearings more which causes more friction. Your gear train also only has one point of contact (the one standoff) which means that the holes aren’t aligned either. I would advise against using 1x1 plate for supports of a gear train as it bends easily (and has bended in your photos). If you have access to gears, use those to gear up the motor instead of sprockets as they have less backlash and friction than sprockets. Your flywheels also seem unbalanced which is probably the biggest loss of energy in your system.

try using gears instead of sprokets as i have found taht they have less friction and are more compact. also if it is avalable use a 600rpm motor(blue) geared up 60:12 for 3000rpm and you only have to use 2 shafts instead of 3 further reducing your friction. ALso welcome to vex forum

The vibrations alone can consume 90 percent of motor power

The bent axles are causing vibration, which will consume most of the power. The sprockets and chains also are not as efficient as gears would be.

Welcome to the forums! Just so you know, all axles (especially on a flywheel) should be braced on 2 sides with bearings. Not doing so can cause excess friction and vibrations that can suck up energy from the subsystem

Just a side note, I suggest supporting the top of your flywheels with a c-channel and a bearing. This will help reduce vibrations.