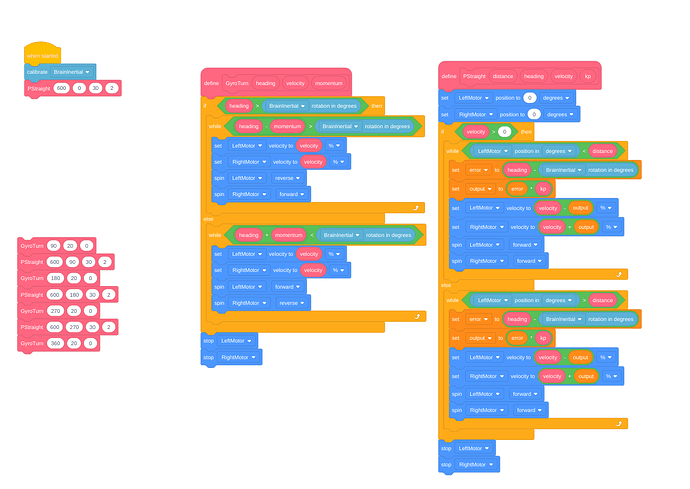 What debugging have you done so far?

I tried putting a wait block in between two blocks and still won’t do anything. Right now I am trying to get the robot to display the degrees.

Update: The brain is saying that the gyro is zero and when it turns it says 90 degrees, something is wrong with the code,but can’t seem to see whats wrong.

This problem has happened to me before, I think i swapped the left and right motors(make left be velocity+output)

That still did not solve the issue. It is still turning and going straight.

Ignoring all the other code first, if you just set both motors to spin forwards, no other code, does the robot drive actually forwards?

Yes if I do not calibrate the gyro that is inside the brain it works.

The calibration of the IMU would have zero effect on just testing if both motors spin forward when you tell them to do so, outside of all the other code you have.

Your problem could have something to do with the fact that 1st Generation gyros were the last man standing in the VEX range for right-hand rule:

In mathematics and physics, the right-hand rule is a common mnemonic for understanding orientation of axes in three-dimensional space. It is also a convenient method for quickly finding the direction of a cross-product of 2 vectors. Most of the various left-hand and right-hand rules arise from the fact that the three axes of three-dimensional space have two possible orientations.[citation needed] One can see this by holding one's hands outward and together, palms up, with the fingers curled, and...

All the newer products (123/GO/2nd Gen/EXP, VR and probably the V5 IMU too) are +ve clockwise.

This may not be the only issue you are encountering, but may be part of it.