I have recently qualified for worlds, and was super excited to get to participate in the Parade of Nations for my first time ever. However, I recently got the VEX Worlds app, and I noticed a little announcement on it: 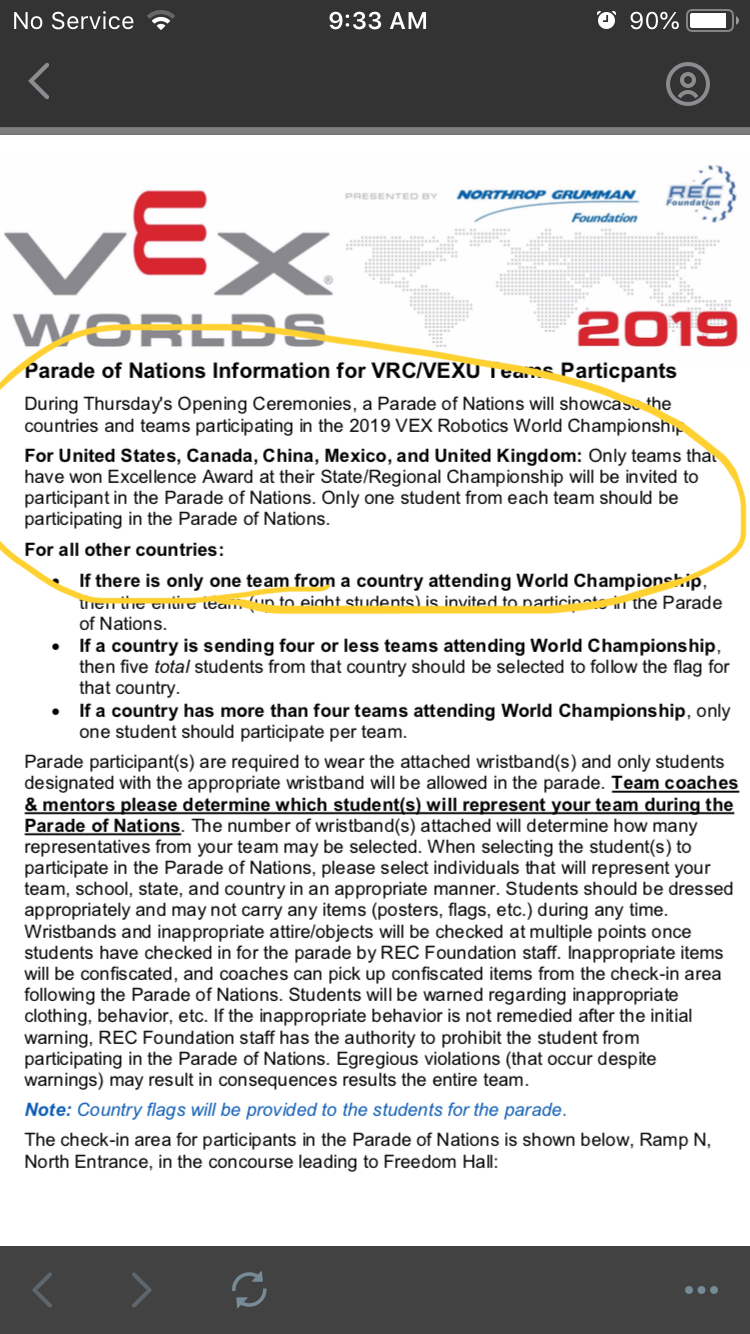 I can’t find this announcement anywhere but the VEX Worlds app. Is this something I should’ve noticed before, or is it just this new? I would hate to arrive at Worlds not knowing this, and the app seemed like a pretty small venue to announce such a large change to the Parade, so I figured I’d put this out on the forums.

I have to admit, I’m pretty dejected. I’ve only been doing VEX for 2 years, but I have always regarded Worlds as the ultimate prize, and the Parade has always been to me what made that prize real and tangible. But as soon as I actually achieved it, the bar was raised.

Is anybody else as disappointed as I am?

If this is the case then I can see why they do it, but at the same time the parade of nations is to showcase how big VEX really is. So I will be slightly frustrated with you…

This is most unfortunate - however understandable in terms of balancing recognition for all the other countries present. I do think an announcement in advance of this change would have been warranted.

Where did you see that announcement in the App, is it under one of the menu options? I want to watch that closely for any other updates like that.

I can see why they’d make a change like that, that’s still a lot of students representing the United States. In VRC that would be around 100 (50 for Middle School, 50 for High School). Not that we won’t have our own disappointed students, we will, but I can understand the change.

Where did you see that announcement in the App, is it under one of the menu options? I want to watch that closely for any other updates like that.

It is in the event documents folder - where PDFs and links exist (team FAQ etc.)

I do think an announcement in advance of this change would have been warranted.

Agreed. And this seems to be becoming a fairly common occurrence with the RECF. How hard would it have been to add an extra sentence or two to any one of the numerous worlds update emails sent out?

On the positive side, it is nice that they picked the Excellence winners for those countries to represent the best of their programs.

Hmmm. Really disappointed with this. However, I am slightly confused why the UK is one of these countries as there is only 1 team with excellence in the UK so it’d be one UK team member by himself?

I am too really disappointed about this, I was really looking forward to the parade of nations and as someone from the UK it doesn’t seem right to just have 1 person go up. I hope this isn’t the case.

I agree, won’t be very exciting for UK to be read out and only one person to walk out - i’m hoping this is changed.

UK has no regional excellence awards

I think the better, broader term is World Qualifying Tournament.

As George mentioned only one excellence was handed out to a UK VRC team this year and it was at nationals.

Well, it sounds like I’m not the only one who was surprised by this, so that’s good. I hadn’t realized how this would affect the UK teams; hopefully RECF will fix that.

It looks bad on RECF if it look likes everything about Worlds is basically a lot of North America and little from else where, even though that is where the majority of teams at Worlds are from

I don’t mind this … however, I would have let all the team members from those that won Excellence participate. Why make the kids figure out which ONE gets to go?

It has always been 1 member per team in the past.