Participating in Skills Without Registering

I was doing some research regarding how state championships in California ran in previous years, and I noticed that during Turning Point, there was an instance where a VEXU team was allowed to participate in the Robot Skills Challenge at the California State Championship in Sacramento without being registered for the tournament, nor would they have been able to register at all since it’s two entirely different competition programs. 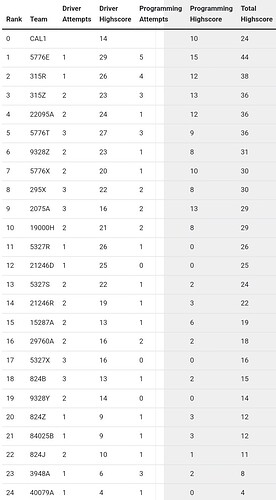 Screenshot_20220309-112832_Chrome668×1208 83.8 KB
Of course, their score did not influence the rankings (it was left out of the rankings, and they were entered in as rank 0), but I still thought it brought up an interesting question: considering there are no rules preventing this (from what I can see) in the game manual and Appendix B, would it be possible for a VRC team to participate in the Robot Skills Challenge without registering for the tournament? How likely would an EP be to allow them to do this?

The reason I’m curious is because a lot of teams in our region are in the hunt for a Worlds spot and are probably looking for some out-of-the-box methods to get their skills scores high enough to get into Worlds through a double qualification.

In the case of VEX U the lack of available competitions, and the small number of teams who would take advantage of it being offered, means I’m more likely to want to help them, and the effect on the actual tournament is much smaller if I do help them.

In the case of a VRC team, in most regions there are plenty of competitions, and if it was made available to one team, there’s suddenly the risk of lots of teams wanting it, flooding already pretty full skills fields, which is unfair to the teams who paid the registration fee to support the event to attend.

So maybe it’s allowed per the rules, I don’t know, and maybe an EP in your region might allow it, but I personally would be very unlikely to allow it, barring some major extenuating circumstances.

VEX-U is a special case, and an EP can offer a “skills only” VEX-U opportunity. Other than the complaint of taking some time away from the VRC teams at the skills fields, the VEX-U skills runs have no effect on the rest of the tournament, and is done “behind the scenes” such that the VRC people would have no information about the VEX-U skills (how much they paid to register, for example), and the VEX-U skills scores are entered manually at a later date.

the VEX-U skills runs have no effect on the rest of the tournament, and is done “behind the scenes” such that the VRC people would have no information about the VEX-U skills (how much they paid to register, for example)

I would think the same could be said about a VRC team doing this though; they come to the venue, pay whatever terms were agreed upon, and do their skills runs while everyone else is busy being inspected and getting set up in the pits.

This is a good point, and I would think that the can of worms it opens might actually be even greater than what you’re implying. Thanks for the input.

The difference, though, is that there are currently only 61 VEX-U teams in the entire US. The typical VEX-U team only goes to a couple events, perhaps driving 4-6 hours to get to such an event, and there is no “state” event for a U-team, just individual events, skills rankings, and the world championship.

Yes, as a mater of fact, VEXU teams will often volunteer at local VRC tournaments in exchange for being allowed to participate in the Robot Skills Challenge. This is due to the relatively small number of VEXU competitions held each season (thus there is a relatively small number of chances to do skills runs at qualifying competitions). Their runs are usually done after skills has closed for the VRC tournament and have no affect on the VRC rankings (although they will show up in the rankings for the VRC tournament, heir rank is usually listed as 0 and their scores are posted to a separate world leaderboard).

As said, VEXU is a special case, and it also has to be pre-approved by the RECF EEM. I have offered that opportunity in the past to teams who have volunteered to support a VRC event.

there’s suddenly the risk of lots of teams wanting it, flooding already pretty full skills fields, which is unfair to the teams who paid the registration fee to support the event to attend.

Unlikely to be a problem with the low number of teams. If for some reason there were 10 teams that wanted to come then I’d work on another skills field. But if I’m going to build a skills field for them, I’d also run a full event. TBH once you have the first 9 fields set up, what’s another one