We have a V4 robot and it has a 3 to 1 drive train sprocket ratio, but it can’t climb the platform. It originally just had a 1 to 1 ratio and could climb the platform, but we wanted it to be faster so we changed the sprocket ratios. We changed basically nothing else on our robot so the weight didn’t change.
Once the wheels hit the platform base, they don’t turn and get stuck. We have a six wheel drive train, with Omni wheels in the front and back and a traction wheel in the middle.

Other fast robots can climb onto the platform, but ours can’t. We’re about to change our drivetrain back to the slow one because we don’t have any good theories, so any help would be greatly appreciated! 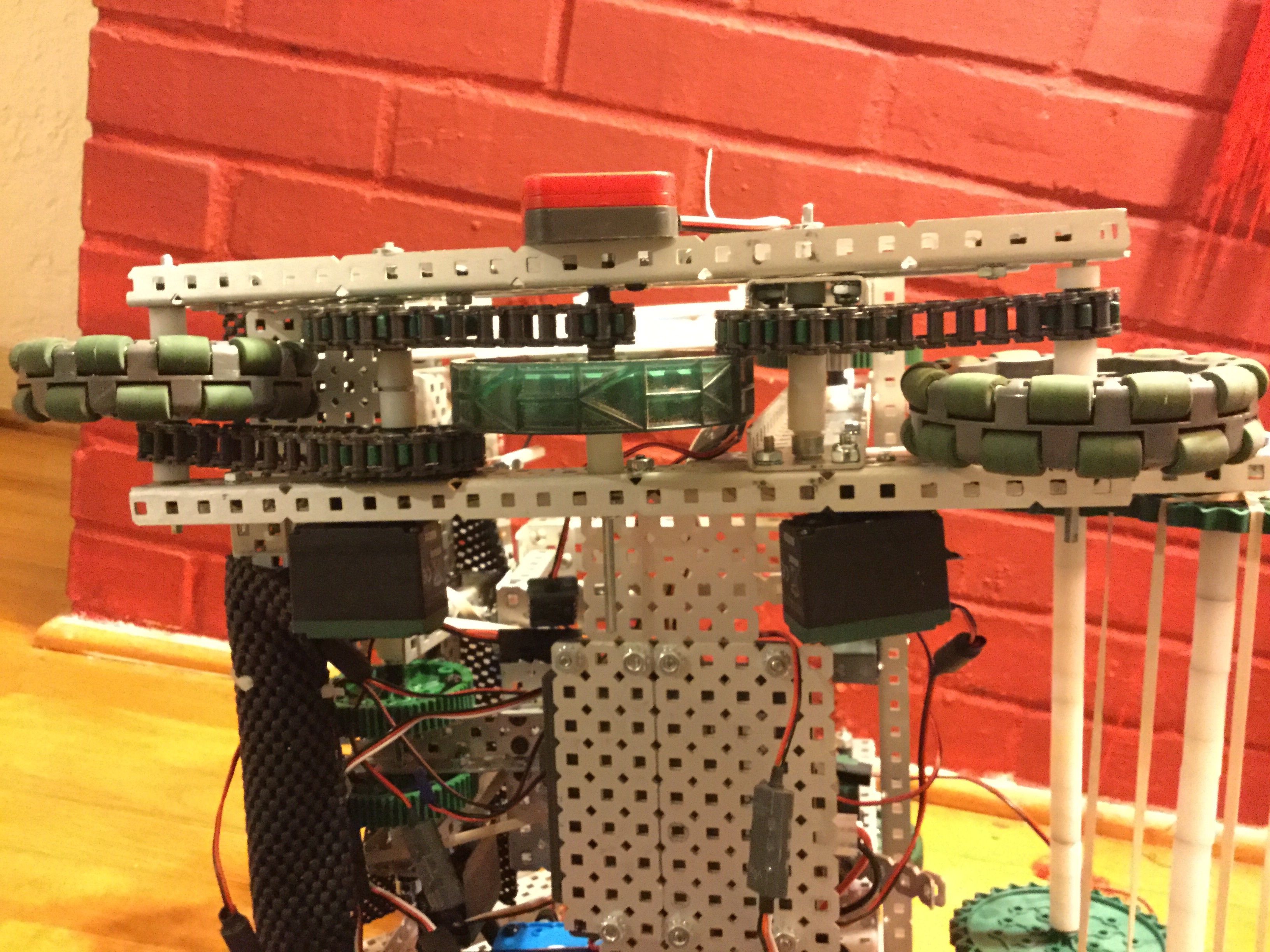 I’m assuming you drive up the platforms backwards (left side in the picture), and this is just an idea but you have that motor giving power to two wheels, if you switch the middle wheel to be powered by the right motor you might get more power to the wheel you need to go up. Also maybe fix your spacing, your wheels are not aligned perfectly and the chains appear to be bending ever so slightly. Other than that I really have no clue I have seen this also but never looked into it because our robot make it up just fine.

+1 on nleighton11’s suggestions. Something seems very mechanically wrong with that drive train: the axles don’t appear to be parallel, and the chain sprockets are not co-planar. You might also check if that front motor’s sprocket is rubbing the middle wheel. Another thing that appears concerning is that the front motor does not appear to be mounted orthogonally to the chassis rail, or it was at one point and has since come loose. Mechanical power losses are a real issue, and everything outlined above can cause LOTS of excess friction.

The other thing that will help for climbing is to make sure that all wheels are driven by all motors. That way you can be applying full power to wherever your traction happens to be based on weight distribution changes (like when a robot is tilting when climbing) or attack angle changes (like when the front wheel runs into the platform and the robot has to lift itself while pressing into the platform).

For a 4 motor drive train a drive train geared 3 to 1 seems very aggressive and it’s possible that it’s not generating enough power to climb the platform due to being geared for speed.

For a 4 motor drive train a drive train geared 3 to 1 seems very aggressive and it’s possible that it’s not generating enough power to climb the platform due to being geared for speed.

In addition to this, your chains are not aligned which would add additional friction to the already low powered drive.

We had a similar design earlier this season. With a 1:1 we had power but we were slow. with a 3:1 we had speed but no power. Ultimately we went to a 1:1 6m high speed drive which is enough to climb in about 3 seconds. We are also fast enough to keep up with most v5 bots from our region. Climbing takes power and a ratio like 3:1 sacrifices power for speed. maybe try a 2:1 or just add more motors to the drive.