Hi all — I’m learning about pneumatics. I have learned about the two types:

I understand that neither is “better”, they just have different uses. Depending on your application, one may be better than another. What I’m wondering is - what type of applications are each type used for?

a single acting is if you want force in only one direction, and it uses less air

a double acting is if you want force in two directions, and it uses twice as much air as a single acting cylinder (if not regulated)

So like if I wanted a shooting mechanism, I’d use a single acting?

For double, an intake roller that goes both ways?

The only advantage I can think of with single acting is that they have a slightly smaller size. But not by very much, and that might not be an advantage depending on the application.

not according to the info on the product page: 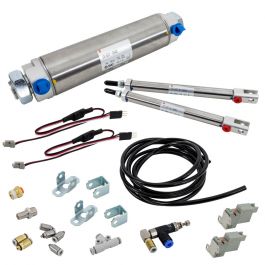 Pneumatic cylinders use compressed air (rather than motors) to produce motion that rests in one of 2 states: fully extended or fully retracted. The cylinder in Pneumatics Kit 1 is single-acting -- it uses air to extend the cylinder rod, but uses a...

we used to use a double acting piston on our claw, acting in one direction, retracting with rubber bands, but now we use two single actings, and they move the claw much much further.

interesting. I only have double acting cylinders, does someone with both types want to measure the lengths to compare against the numbers vex provides?

Physically, the single acting the cylinder is a little longer because they have to make room in the cap for the return spring, but this does not change the 2-in stroke

so are the numbers on the product page incorrect then?

The only reasons to use single action are cost and availability

The only reasons to use single action are cost and availability

and to conserve pressure

A double action piston cylinder can be driven from just one end, which uses the exact same amount of air as a single action. If you go that route, you will need to us rubber bands or gravity to push or pull the cylinder in the opposite direction. For a while we were using double action cylinders on our front gripper with rubber bands just pulling them back together.