Is it possible, (or legal) to connect the exhaust from a pneumatic solenoid through a directional valve back into the airflow? Would be used to contain as much air as is possible, but on the solenoid the exhausts are too close to the (air supply in) opening. It is not legal to modify any of the solenoids, pistons, or reservoirs, but I was thinking of melting some of the tubes and attaching it that way, maybe some metal to hold it in place.

The British patent office has a no-review policy on perpetual motion machines, but nice try. While it’s definitely legal, you have to lose air at some point for this to work. If you need more air, a better idea might be to redesign your mechanisms, or, dedicate a motor as an air pump (which could work).

While this might be a better strategy, it is also against the rules to use a motor (or anything) as an air pump.

The gas laws were developed at the end of the 18th century, when scientists began to realize that relationships between pressure, volume and temperature of a sample of gas could be obtained which would hold to approximation for all gases. In 1662 Robert Boyle studied the relationship between volume and pressure of a gas of fixed amount at constant temperature. He observed that volume of a given mass of a gas is inversely proportional to its pressure at a constant temperature. Boyle's law, publ...

so it would seem that I am stuck with a total of 100 psi.

I am pretty sure that the guidebook bans devices meant to generate air pressure in the name of safety, but I may be mistaken.

Yes, I believe this is correct. I should have clarified that in my post. Thanks for the catch. The rule is, however, somewhat vague, but I’m not condoning pushing it. 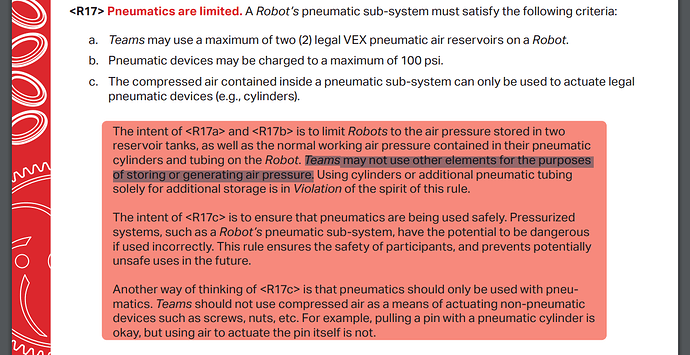