I have designed a pnuematic-powered expansion string launcher, that is mounted directly to the pnuematic piston , but I am a little concerned that the piston does not fire with enough force to launch the string enough distance to clear the robot and land on a few tiles. Is there anyway to program pnuematic system to have a higher extension force (faster maybe?)

Additionally, How does the pressure regulator work, and how could I use it to my advantage?

mounted directly to the pnuematic piston

Well, it’s probably mounted to the end of the “piston rod”, the part that sticks out of the air cylinder. The little piston works best when it stays inside of its air cylinder (see the picture below of a piston getting out of its cylinder

There is no programming you can do that will affect how fast an air cylinder “fires” as the solenoid valve is either on or off.

Most (all?) launchers that I have seen teams use this season are powered by rubber bands, and the air cylinder is used as a “release” for the rubber-band powered launcher. It may be that even at 100 psi, and even removing the air fitting from the exhaust side of the air cylinder to allow free-flow of air, that you won’t obtain the action you’re looking for. These little air cylinders are rated for about .035 Joules of kinetic energy according to the manufacturer’s specs, which doesn’t amount to a whole lot, especially if you’re trying to move a heavy object (the property you’re dealing with is called “inertia”).

The pressure regulator reduces the working pressure to something constant, at a pressure lower than what is in your air tank. For example, pump your tank to 100 psi, and set your regulator at 50 psi, and all your air cylinders will operate with constant force (roughly 6 lbs) until the pressure in your reservoir drops to 50 psi (then obviously the force will be less as the pressure continues to drop). 2 advantages: more actuations of your air cylinder, and more consistent operation.

Keep those pistons inside their cylinders where they belong! 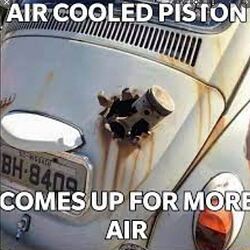 If you want a faster speed a regulator will probably not help you. If you want more speed, maybe try using a lever.

i appreciate your assistance and I will explore to see how I can make use of the pnuematic systems more to my advantage.