Please describe what you are running through the power expander and how tough it is to get the motors attached to the PE running. Are your flywheels coming out of there? Drive motors?

We’ve had mixed luck with the PE in the past. They seem susceptible to breaking and the PTC seems sometimes to be easier to trip but it is more anecdotal on that than real hard evidence.

If the wires are frayed, buy a new power expander. Email Vex support to see if they can help. But you may need to buy a new one. You do not want a fire or shock hazard.

One suggestion in using the PE is to put a standoff along the battery connector wire and zip tie the battery wire to the stand off. This will limit the ability for the power expander battery wire to wiggle into a frayed state at the bottom part going into the PE.

Also limiting the weaker used motors through the Power expander will help in current draw being lower than that of the Cortex. You would think the opposite would be true where the PE only has 4 motors and a well defined battery for its use. But I have not seen this be the case empirically. No heavy duty tests with scopes or current meters, just a lot of head scratching.

But what are the motors doing??? What kind of load are you putting on those poor things?

I’ll try one more time… It is the machinery usually adding the friction and load on the system. Four foam balls is pretty minuscule. Unless you give some real information, it is difficult to get some real help.

So what are your motors driving and the more details the better. Flywheels, gear rations, and shaft layouts all matter here.

I can get a picture to you on Friday.

here is a pic of our luncher 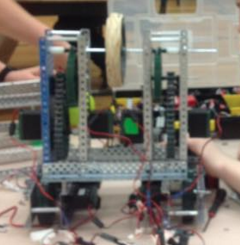 Wow that is a very fuzzy and rather small picture. It’s a bit hard to see what is going on.

You appear to have four motors for a single flywheel. I see a 49-12 tooth on the part to the flywheel but I can not discern what is on the chain.

Friction checks are what you want to check