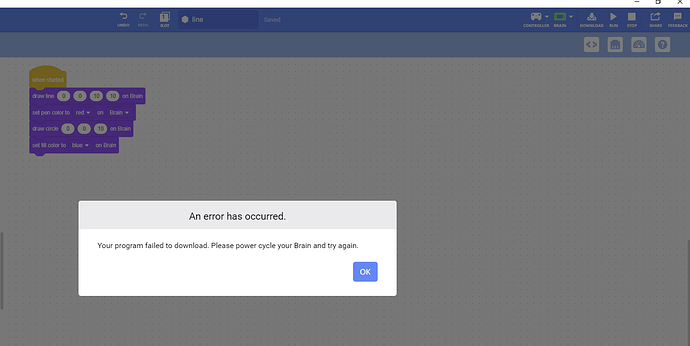 I would suggest contacting VEX support.

You aren’t the only one having problems connecting to a computer with the new v2 brains; many other people are also having similar issues.

many other people are also having similar issues.

Really ? I’ve not seen any feedback indicating this.

Here’s a few of the topics I was talking about (in addition to this one):

I just received 12 new vex iq v2 kits. The brains are not being read by the computer…the only way I can get them to be read is by updating vexcode and using only that software. VEXos Utility won’t read them, as won’t Modkit, which even though it is an older software, is still the one preferred by myself and my students…

We are trying out the 2nd generation VEX IQ brain, and we are having some issues with the motors freezing up, and the controller buttons not doing the right thing. When we were trying out our robot code, and put our 2-motor lift down, one of the motors temporarily froze up and made the whole lift misaligned. Also, sometimes when we press a button, the button does the wrong thing, and instead of it doing what it is supposed to do, it performs the same function as the previous button pressed. Thes…

My students got the following error when trying to download a VEXCode IQ program and I can’t figure out why: windows build for platform vexiq2 “CXX src/main.cpp” make: *** [vex/mkrules.mk:13: build/src/main.o] Error -1073741515 make process closed with exit code : 2 We are using PC with Windows 11. VexCode IQ version is 2.2.2-7. They are trying to download the program to a VEX IQ 2nd gen brain. The program is in blocks (not text). The same program downloads from another teams PC just fine.…

Just did our mentor bootcamp since our teams start Tuesday and we had a few issues while testing out VEXcode for IQ with our Chromebooks. From time to time the download button was gray and new code could not be downloaded. Everything has been updated, project saved, slot picked, program seen the brain, but the button remained unclickable. To solve we had to reboot the program, sometimes more than once. We would save the successfully download a project to the brain, try to run it and get n…

Folks, I’m using the VEXOS utility but it will not recognize the VEX IQ Brain. What I have tried already: I have downloaded the latest version of the utility. I have tried three different cables in hopes it was the problem. I have tried one PC and two Macs. I have tried every possible USB port. Still every time the utility will open fine but it cannot see a device connected. I typically turn the brain on after connecting the device to a PC/Mac. I’ve tried the online chat with VEX. First…

Here’s a few of the topics I was talking about (in addition to this one):

Mis-information, I won’t re quote them all but here are comments for the 5 linked topics.

It would be most helpful to send feedback within VEXcode after the error occurs so we can assist in troubleshooting the issue. The individual screenshot does not provide enough context to see what the issue might be.

Okay sorry, I guess I misinterpreted what the issue was. Thanks for the clarification.

but its quite disappointing that I dont see any reply from vex for last week and cant get the code to sync from PC or MAC to GEN2 brain.

I am a programmer myself just new to the vex platform. please let us know next steps to be able to sync code and I can try and get back if it helps.
this may help other folks who may run into similar issues, also the support guy on call mentioned they do not have enough GEN2 brain to test issues.