Punchers are viable! questions anyone? I’m somewhat skeptical of the accuracy and aerodynamics of a real disc being shot from a puncher, especially at long range. But if you can find a way to make them work on a real robot, it could be viable. Don’t see what performance advantages it could have over a flywheel, but maybe there’s some merit.

we plan on making a box tube so it always leaves at the same angle and has little to no wobble during flight. we’re also having troubles with flywheel designs and we have a custom mech we’re gonna use for the puncher

also, out robot is going to have a way it’s gonna be able to shoot 3 discs at a very close range and 1 disc at far range, and we plan and taking advantage of the no extension in low goal area by cleaning up the low goal very quickly with a dual intake design

What do you estimate the fire rate will be?

It looks like you’re using a 3D printed disc, do you expect to have similar results with the actual discs? I would think that the foam would absorb some of the impact, which could lead to less powerful shots, or potentially inconsistent ones if they’re not nestled perfectly.

we are pretty confident that the discs will fly/float pretty similarly, if not we will have to adjust.

I’m pretty sure they won’t, we ended up getting some disks so we didn’t have to make any but The 3d printed would be heavier than the foam and when you hit it the foam could bend where the 3d might not

I came across this article a while back. I’m not sure how well it translates to VEX components or if it is helpful for you guys, but it’s pretty interesting how Nerf decided to launch their own discs. Figured I’d share: 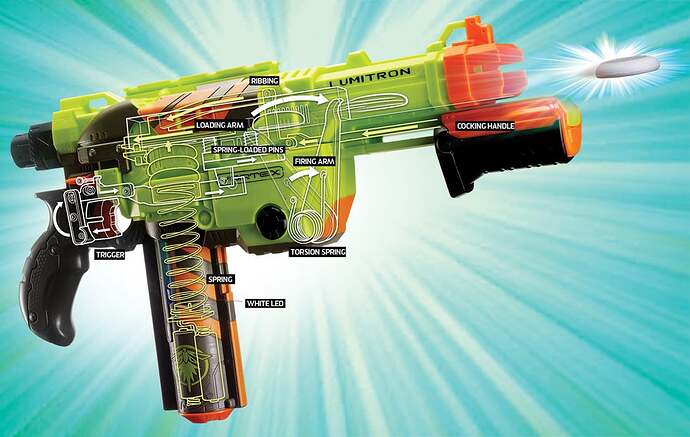 How It Works: 20-Yard Shootout

Since Nerf introduced its first dart gun, the Sharpshooter, two decades ago, the company's engineers have struggled to find ways to significantly advance

Really cool design. It looked quite large right now would it fit on a robot in the 18x18x18 area or does it still need to be slimed down. How do you indent to power the puncher. I didn’t compete in Turing point so I don’t have any experiences with those designs.

Is the 3D printed pancake TPU?

That’s why we make a boxtube so it gets hit, doesn’t bend, and leaves at a straight angle

it would need to be slimmed down a bit, but these were just parts laying around that I made into the prototype. For powering it we’re going to do a slip gear, or a normal gear with a special release mech.

no, it is onyx reinforced with carbon fiber

also to add on this, we made the disc have only 3 grams of extra weight with adjustment to the setting on the 3d print. it’s very similar.

Ya other then stiffness should probably fly the same

As someone who has played around with similar mechanisms in the past, I’d caution you about the durability and fault tolerance of such a design. There are several moving parts as well as significant forces involved. The puncher flying forward and hitting the stop is a heck of a jolt and can be very destructive. You are likely going to have to consider about 70-90% of the mechanism consumable depending on how you draw and release it. There is also a fair bit of things that need to stay aligned for it to work, so if one thing gets out of whack, the whole thing may fail.

I would beg to differ. Spin is essential to shoot a disc, and if you have none it will be unstable.

the thing about no spin is after around 100 shots they all landed within the width of the low goal from the 2 distances we wanted to shoot from. we’re confident on this design.