Today we released another medium sized update to the Wiki. This includes:

We thank you for your support, and are still actively looking for people to help out with the Wiki!

This is really a niche thing, but this paragraph could also include the fact that the center of mass of the lift itself shifts forward relative to its starting position. In other words, as the lift goes up, the robot becomes increasingly unstable despite the load moving completely vertical. This is because the midsection of the lift moves towards the load due to the geometry of the DR4B. To combat this, you can power the DR4B from the bottom 4 bar –– lightening the weight of the midsection.

I’m not sure if I’m just misreading this paragraph or if it’s mentioned elsewhere. I just think this distinction should be explicitly stated.

By the way, I think you guys did a fantastic job on this wiki post. It’s very clear and informative.

Depending on the configuration, even rearwards then forwards too. (Not to negate what your saying, merely adding onto it)

Feedback recieved, we will be making modifications soon!

Yeah that is probably something I should mention. Thanks for the feedback and I’ll probably add it next update.

Can you add the existence of the DR8B to the list of weird varieties? We’ve prototyped one for the memes but didn’t get a good enough version to take a picture. 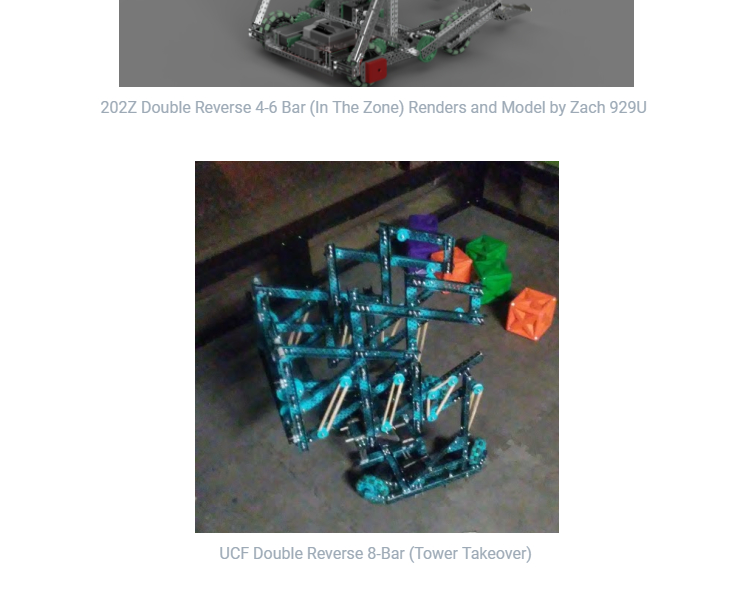 Thanks for the suggestion, but I believe we already have an example of this in the last section that talks about how the DR4B design isn’t completely restricted to 4-bars and can be a combination of different lifts.

Yeah, I’d just assumed you’d want to cover as many types as possible.