Am I missing something?
The 4x yellow standoff (pic 1with red X ) seems to block the ejection arm from rotating 360 degrees. Position was double checked and is correct per build instructions. Seems to only have a support role which really is not needed. Removing it (pic 2) allows the arm to rotate freely and dispense one disk each rotation. 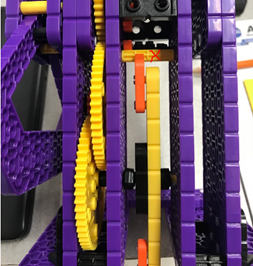 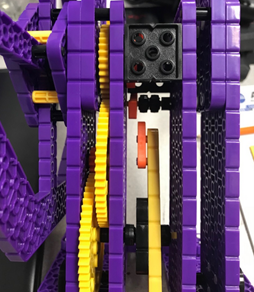 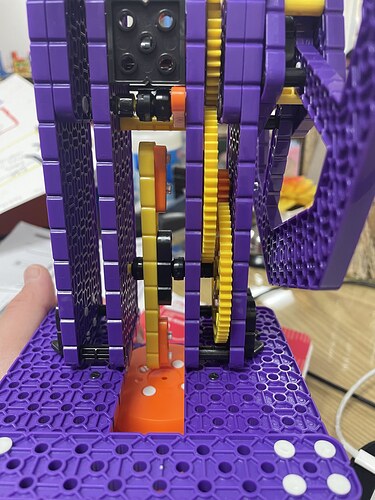 I did not have that issue (I assumed your picture was when the dispenser was upside down. You can see it can make a complete rotation. Maybe it was off by one spot?

Your little orange claws are attached to the yellow beam in the wrong place. Look at steps 30 and 31 again.

I believe the function for that is actually to prevent the pawl from bouncing out of position and allowing the dispenser to spin both directions (without explicitly holding the pawl up to rotate the wheel to the necessary starting position).

Aside, I foresee a Q&A about the starting position of the arm/wheel for the purple dispenser. The gearing of the dispenser is such that a ‘random’ starting position could make 1-2 seconds of difference in engagement of the mechanism to first disc dispensing.

I did that too, @nnolte is correct that the orange pieces are one hole too far

These are the very reasons that at least our ES IQ kids are not going to be building these purple dispensers.

I really wish they provided coordinate references in the manual for some of these items on the larger plates where things had to be zoomed out. It was tricky to find just the right spot for those components.

My students did the same, and continued to push until the plastic shaft became 2… So the color of that one will be a little off…

We replaced the plastic shaft with metal. That gear ratio is high enough that you’ll snap the shaft before you realize it’s even stuck.

We replaced the plastic shaft with metal. That gear ratio is high enough that you’ll snap the shaft before you realize it’s even stuck.

Can you use that on a field at a qualifying event?

Can you use that on a field at a qualifying event?

I don’t know. But in lieu of such a long plastic motor shaft that we just don’t have, it was the next best option to have a working field. I’m unsure if that would be a valid question for the official Q&A when it opens at the end of the month since it isn’t really a question about the game manual rules. There doesn’t appear to be much, if any, difference in functionality at least. I’m really curious how many shafts will be broken and in need of replacement in the next few months.

I plan on submitting a Q&A item for starting position of the purple dispenser arm, if it’s not already updated in the manual, as that goes to gameplay.

I think asking about substitution of equivalent parts should be a valid question. If I had to guess, though, replacing plastic motor shafts with metal would change the dynamic (even slightly) of the purple dispenser in particular, at least for the items in the wheel mechanism geartrain.

I plan on submitting a Q&A item for starting position of the purple dispenser arm, if it’s not already updated in the manual, as that goes to gameplay.

That was one of my two main questions.

If I had to guess, though, replacing plastic motor shafts with metal would change the dynamic (even slightly) of the purple dispenser in particular, at least for the items in the wheel mechanism geartrain.

I’m sure it changes it somewhat even if imperceptibly. But honestly, a mechanism with such high torque should never have been designed with a plastic shaft. It’s far too easy to break the shaft before you even notice there’s an issue. I understand that cost for them can be a factor, but how many replacement shafts will they have to send out? Maybe eating replacement costs doesn’t outweigh the cost of shipping with metal shafts.

At least through manual operation of the wheel, I’m not seeing significant torque being applied to those gear axels. The whole mechanism as built turns very freely, even without a couple washers where I think there should have been some (which I suspect was intentional, but I don’t like it).

There’s another thread where we’ve discussed the field build, and there’s a gif that shows how easily it spins. Am I misunderstanding some other part of the dispenser you’re talking about?

The legal answer would likely be no, but so long as it was functionally the same, I wouldn’t have a problem with it if I were a team at that event. However, if it added friction to the system, or altered the performance in any other way, I’d probably want the real pieces.

If it’s the long motor shafts that are driving through the wheel into the 60 tooth gear, then technically putting a metal shaft in place of that would impact the momentum of the whole mechanism, albeit it slightly, requiring a bit more power to start, and likely running free-spinning a bit longer (though maybe not, I’m a SW guy, not an ME

Am I misunderstanding some other part of the dispenser you’re talking about?

Basically, if the indexer becomes stuck for any reason whatsoever, the wheel spinning will break the shaft likely before anyone notices that the indexer isn’t spinning. Out of two fields built, I’ve seen two shafts broken so far. Granted, that’s anecdotal and it’s somewhat due to elementary kids trying out an unfamiliar mechanism in a slightly-less-than-perfectly-careful way. Gives kids something to spin and they’re gonna spin it. The shaft can break before they even realize it isn’t dispensing properly.

When built properly, and as long as nothing gets stuck in there or knocked loose, it works great. But that gear ratio snaps those shafts like twigs with just a tiny bit of forcing it.

The legal answer would likely be no, but so long as it was functionally the same, I wouldn’t have a problem with it if I were a team at that event.

I agree with this. And would also prefer for things to be as standardized as possible. But playing devil’s advocate, those are not standard shafts that I just happen to have on hand to fix it. If it ends up being something that’s going to happen even a couple times throughout the season, I’d want to have a handful of them on hand at least.

All that said, I’d gladly trade the little bit of friction and momentum differences if it means I can rely on the mechanism not breaking in the middle of a match.

I get where you’re coming from now. I think as long as adults are doing building of the purple dispensers, they’ll hold up well. But guidance from Vex on how to handle when they do inevitably break will be key.

(I’d also like to know why there’s no washer between the wheel and the base… that one really bugs me.)