The frame is made of steel C-Channel and the skin is Aluminum Plate.
All the drive electronics will be mounted in the body.
The chassis rides on 16 Quad Road Wheels.
The drive train uses the new Heavy Duty gears (12 tooth steel pinion to 60 tooth).
8 VexPlorer motors, 2 at each corner.
The track will end up being the Gray Advanced Track (the green track is just for mockup)
I’m open to any ideas on what to do with this. 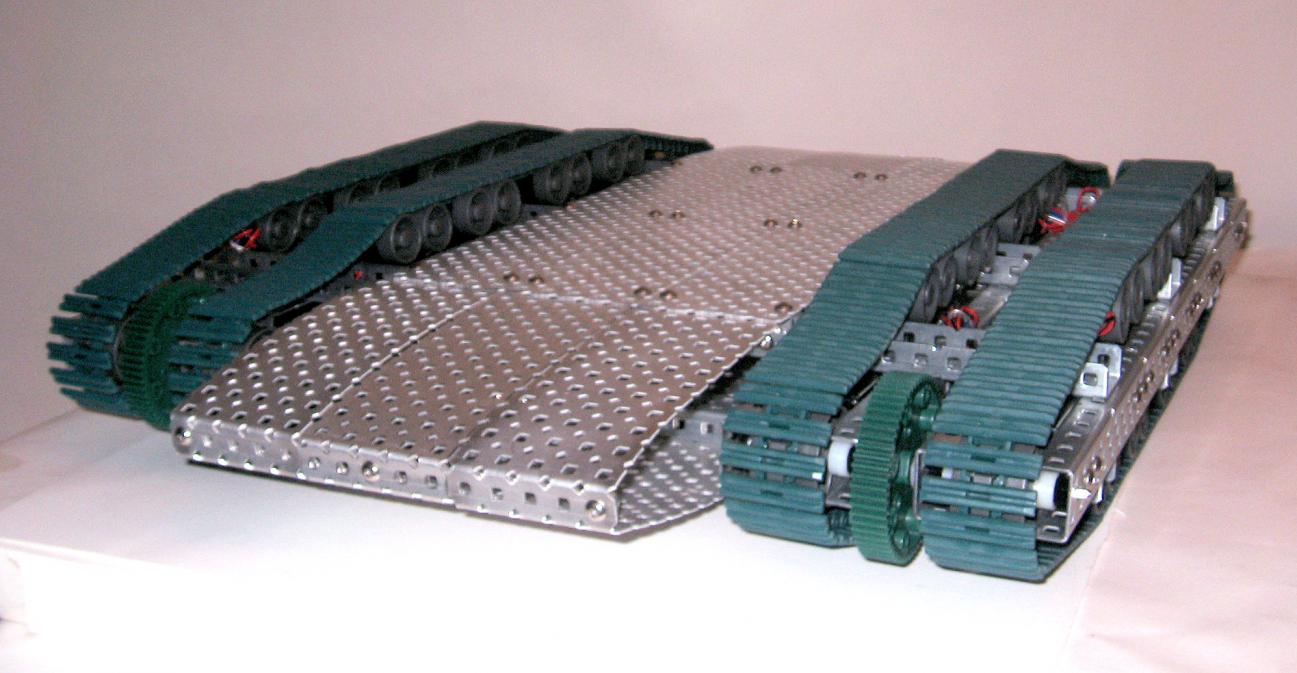 Wow those new gears look good. Nice robot though. Did you use VEXplorer motors to save space or some other reason?

EDITED: Add some pack-bot features and make it the ultimate rough-terrain crawler. Stairs, too.

I used the VexPlorer motors because they are a little stronger than the standard motors.

I will have to program the Controller to run all 8 motors in the right direction.

Nice piece of work. The new gears look good, are they intended to be usable as wheels as well?

They are just gears. If you need a wheel there are lots to choose from. Technically anything round(ish) could be used as a wheel though.

if only i had that many parts… nice robot though!

I’ve thought about the PacBot design. The flipper tracks are very innovative. If you’ve seen my Magbot III it uses an independent quad track design. That design showed incredible rough terrain maneuverability. The ability to have part of the chassis remaining flat and stable and the other part of the chassis able to climb was very promising.

There is a vehicle the military is using now called the Mule (Multifunction Utility Logistics and Equipment) that has a very unique drive train. I think if you were to use tracks instead of wheels like the Mattrack System you could build something that would be very impressive. 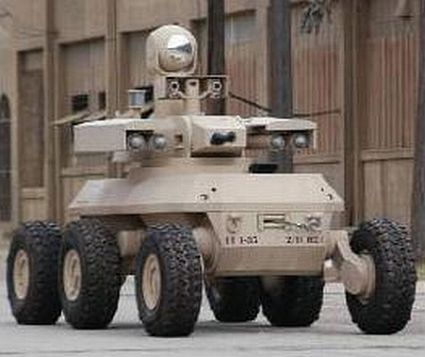 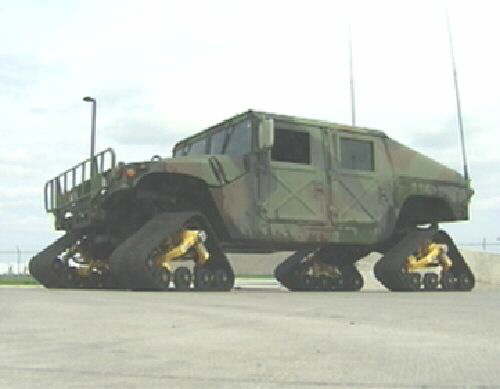 I wonder if those are some of the new heavy duty gears… if so they look good. I have thought about making a PacBot type robot… Very Cool

Edit: sorry just realized that he said it was the heavy duty gears

what do you plan to do with it?

Do you have anymore pictures ,like a side view, maybe i could give you some ideas then

The drive train uses the new Heavy Duty gears (12 tooth steel pinion to 60 tooth).
The track will end up being the Gray Advanced Track (the green track is just for mockup)

Do you know when the new Heavy Duty Gears will be available?
What is the Gray Advanced Track that you are talking about - I didn’t know that there was any new track coming out?

Any details that you could provide would be great!

How did you get the new Heavy Duty Gears - I didn’t think they were available yet?

If you look at the first post, you can see that Beener is an IFI employee, which also explains why he would have (at least) 18 aluminum plates to use for this model. To get that many, we’d have to buy nine of the Aluminum Metal Kits!

What is the Gray Advanced Track that you are talking about - I didn’t know that they were making any new track?

Yes indeed - this is the first mention I’ve seen of an advanced track. They do sell gray tracks (The VEXplorer ones) but they appear to be identical to the VEX tracks except for color. I’m guessing that “Gray Advanced Track” refers to something we haven’t seen yet…

I’ve got some directions that I can go with this chassis, however I wanted to see if anyone could come up with something better.

The Gray Track is the Upgrade Kit, it’s nothing new. It has a bit more traction than the Green Track.

The tank tread upgrade can be found here:
http://www.vexrobotics.com/vex-robotics-tank-tread-upgrade-kit.shtml

There are a few potential directions here. 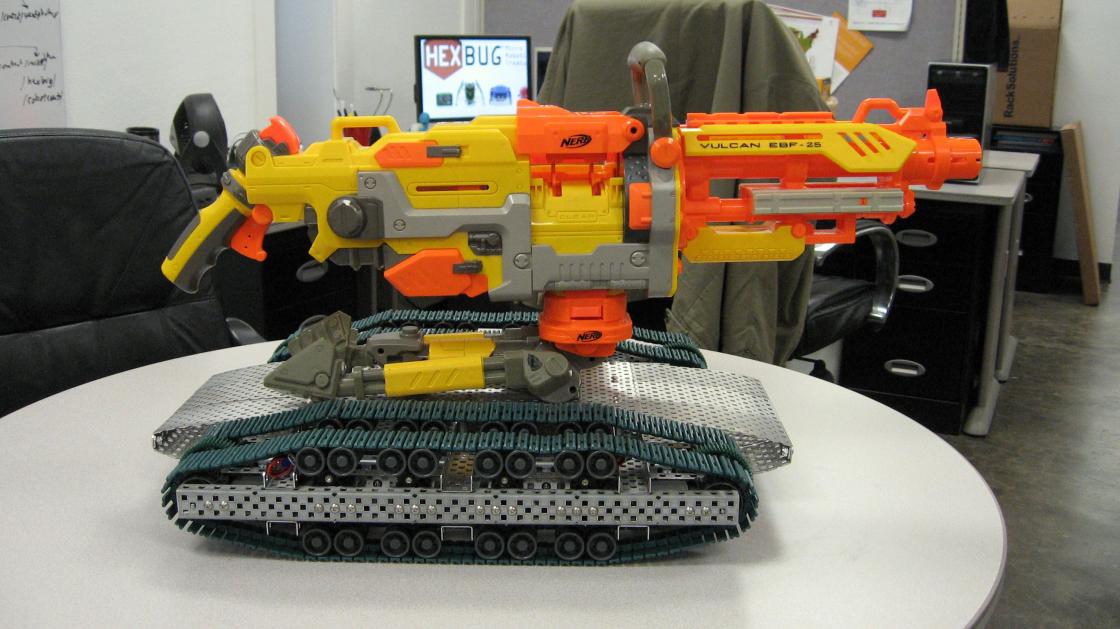 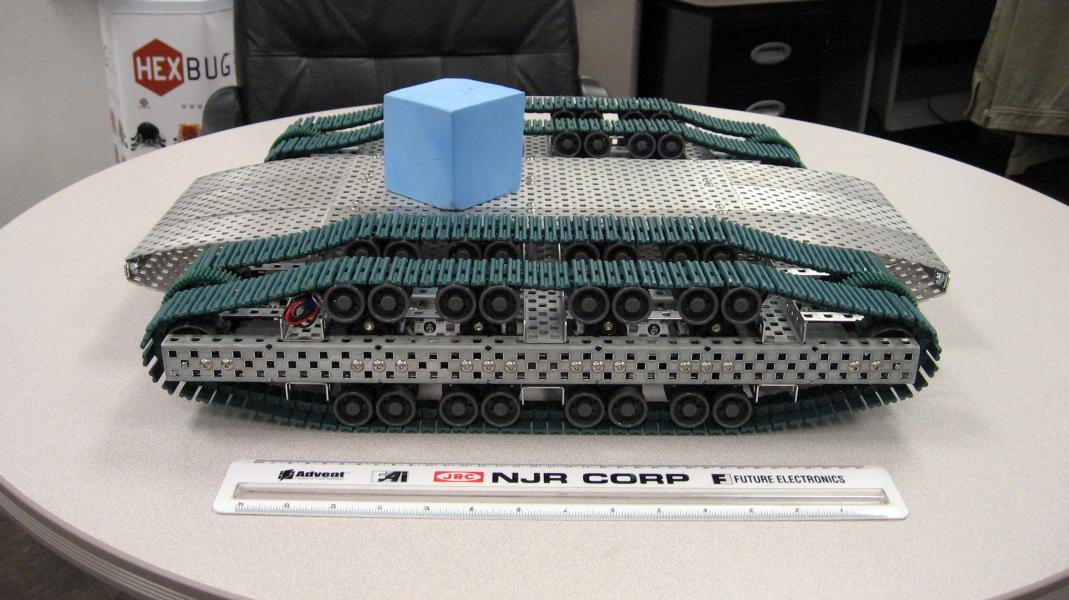 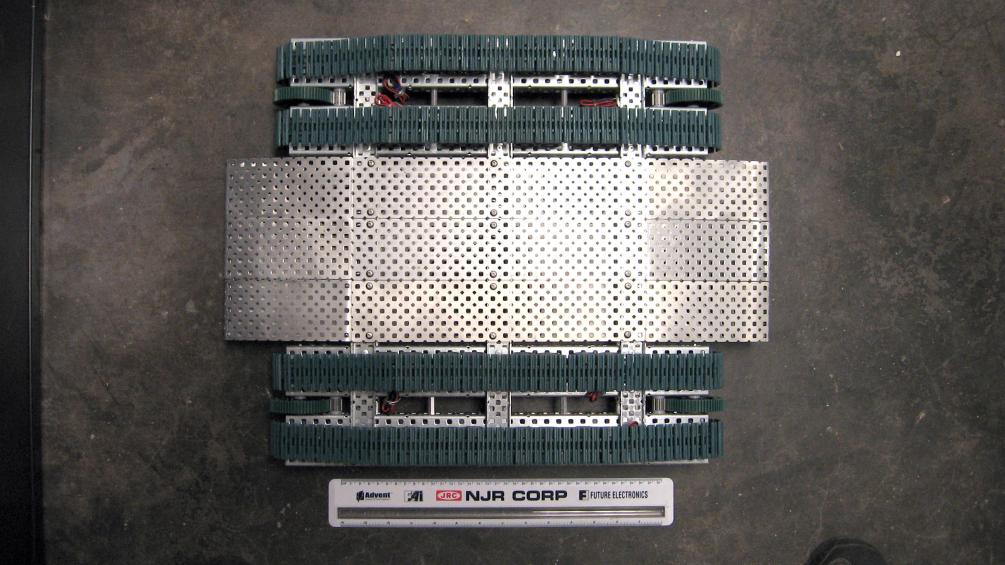 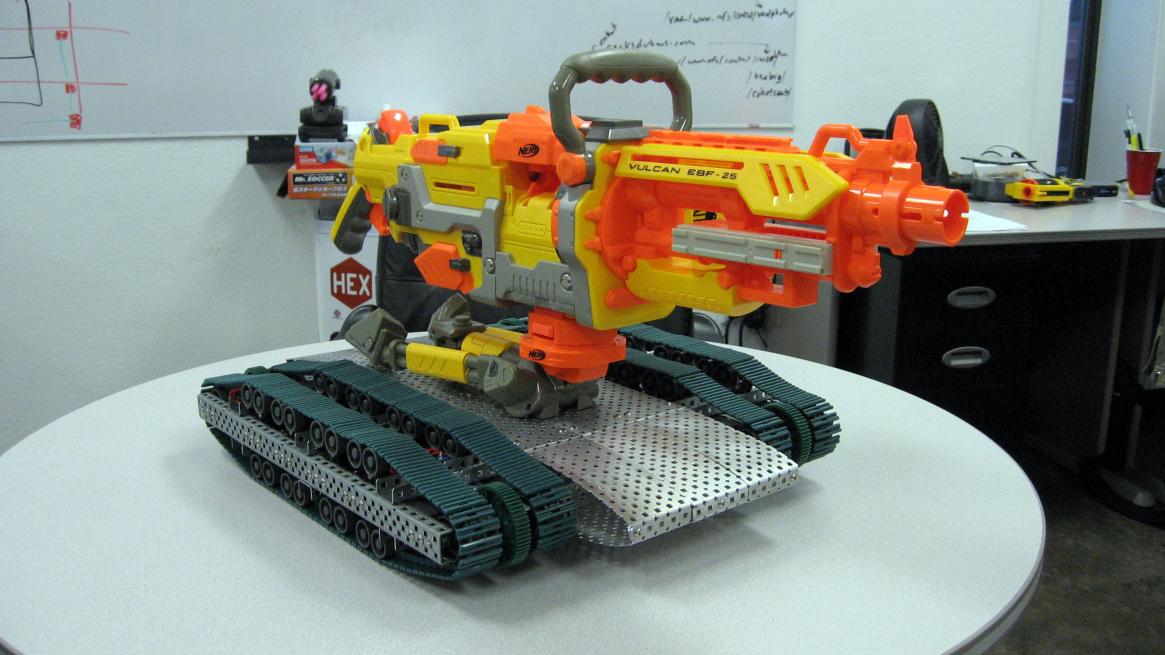 The Gray Track is the Upgrade Kit, it’s nothing new. It has a bit more traction than the Green Track.

Ahh, right. Forgot about that. Sorry for adding confusion…

The platform is big enough to fit a small robot on. You could make a sort of Vex “personnel carrier” that could transport and deploy a smaller, less rugged robot across rough terrain. Maybe add on the USB rocket launcher in the background of the side photos just for fun.

My other idea to take advantage of the platform size is a Vex controlled catapult. Build a catapult where the range, direction, power, etc… is all controlled by Vex.

I wanna work for IFI you guys seem to have so much fun… Anyways I definitely like the nerf gun idea. To do that really easy I envision IFI creating the VEX Lazy Susan turntable. Vision tracking using the VEXplorer camera.

Another idea which is just cool not necessarily useful. The mobile VEX Trebucheut.