Hello. I have a question. Will there be booths at the world? And if yes, can we know if every team from each country has their own booth?

In years past, you will be assigned a 10’x10’ booth at worlds. Theya re generally in numeric order per division. The MS kids are in one area, Vex U in another and high school in a very large area. 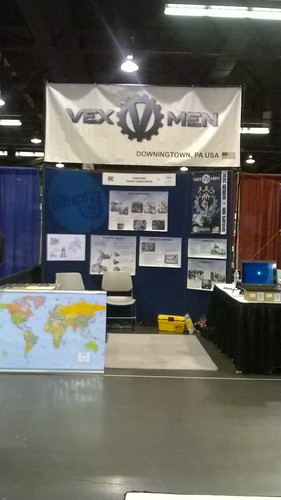 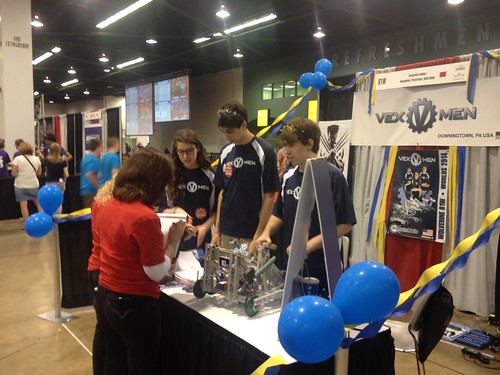 In the background of the second picture you can see the huge displays of the schedule and activity per division. Very helpful.

So bring your comfy shoes and maybe something to cart your robot around on if possible since it can be a long walk if you don;t win the booth lottery being close to your field…

Judging by the info here, the booths will be pretty much the same as last year.

Here is the program for the event, which also has a map:
http://www.roboticseducation.org/documents/2015/03/2015-vex-worlds-program-book.pdf

…Will there be booths at the world? …

just so you know: many teams refer to their booths as “pits”.

Also, if there are several teams from a single organization, sometimes they will re-organize their pit borders to make one giant pit so everyone from that organization is in one large space, instead of having rails between each pit.

Also, if there are several teams from a single organization, sometimes they will re-organize their pit borders to make one giant pit so everyone from that organization is in one large space, instead of having rails between each pit.

We will be making ours into a large one since we have three teams and putting our own field in the middle. Makes practice and programming much easier, no fighting for a practice field! Glad we can drive this year!

Are all of the pits organized into groups by division, or just by numbers?

Are all of the pits organized into groups by division, or just by numbers?

That would be so nice if they set it up that way. Then we don’t have to walk half the distance of the building to get to each match.

The WC FAQ (can be found on the RobotEvents website) document seems to state otherwise:

While teams will be split into different divisions randomly, we expect that most pit areas will be in sequential order for VRC High School Divisions, VRC Middle Schools Divisions, VEX U, and VEX IQ.

If I’m reading this correctly, pits will be organized in numeric order, as they have been for the past few years (to my knowledge). This layout is much more efficient for organizations bringing multiple teams because tools, parts, batteries, and other supplies can easily be shared among those teams. Sure, a layout according to division may make it easier to maneuver through the venue, but it will also make it much more difficult for parents, mentors, and supplies to be evenly dispersed among those teams.

EDIT: I just saw another section of the QA stating this:

Teams should also realize that pit locations are organized by both team numbers and by division.

So not too sure about the pits layout then, but I’m assuming/hoping it’s by team number and the division will be represented by some other means (i.e. curtain color, written on the team sign, etc).

Thank you everyone for your help <3 does anyone know how can we get snapchat to post our stories about vex as an event? I think it would super cool if everyone could watch what’s happening in worlds from snapchat.

VEX world event is streamed live on robot events website too. Wouldn’t it be easier to see it directly from browser? Then you would not have to go through another app.