At our a recent competition, we were strictly warned about putting carbon fiber on the Lexan we use in the middle of the cube tray. The basis of the argument is that it changes the coefficient of friction for the cube to slide on. Upon further investigation, I thought i’d seen other teams do the same thing, obviously just for decoration. I understand where it could look like a rule violation (R12), as tape isn’t allowed for anything except wiring and decor (nonfunctional). Is this a violation of the rules, or is it just an overly cautious inspector? *** we are using the contact paper type of carbon fiber. Surely this isn’t anything different than covering your cube tray in a whole bunch of stickers, right?

If the paper in on the side that the cubes will touch when sliding up the tray, then that it illegal. But if it is on the underside of the tray (where the cubes won’t touch it), then it is legal as a nonfunctional decoration

For stickers, they are placed on the outside of the lexan (where no game object will touch it)

Can you give me a rule to back this? I’ve gotten two different opinions on this so far

Overly cautious inspector. Most inspectors wouldn’t call teams out for this because, as long as it looks like decor, it doesn’t break any rules. Even if it does help with the friction, it technically is just decoration. There is no rule against putting stickers somewhere that may contact a field game element. 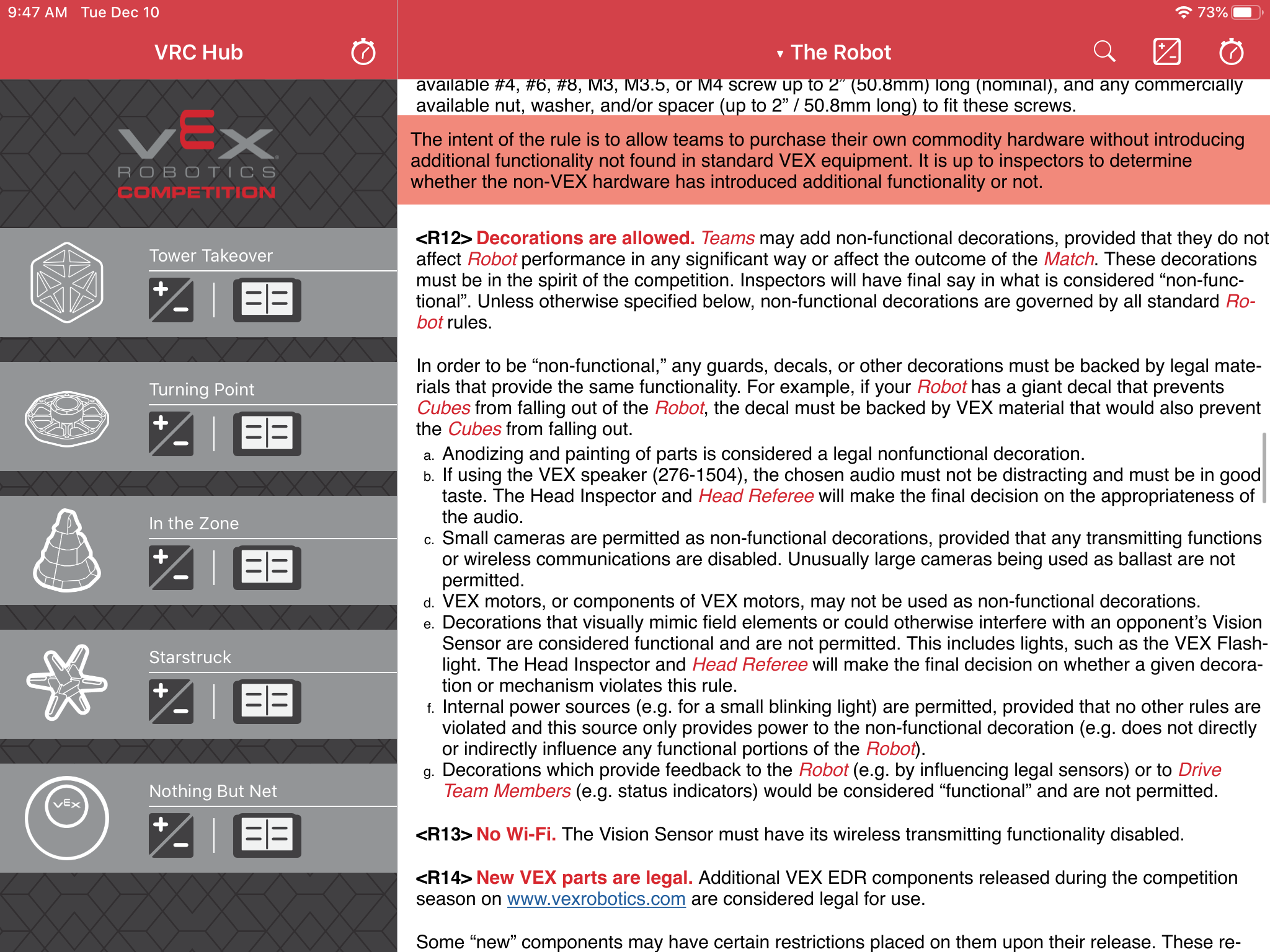 This rule states that if you have a decal, it must be backed by legal material. Which, in my case, it is. Making my use of carbon fiber legal

Stickers are on the underside of the tray. Cubes slide on the tray, not on the stickers.

You use of carbon fiber on top of the tray that has Cubes sliding on it is not allowed.

The example they give of something keeping cubes from falling out, the sticker is on the legal VEX part, but it’s away from the cube.

@MayorMonty Yeah, we’ve used the cube tray with, and without the carbon fiber and absolutely nothing changes

The example they give of something keeping cubes from falling out, the sticker is on the legal VEX part, but it’s away from the cube.

Let me suggest that you put a formal Q&A question in and get an official response.

Trying to get a group of us to match up with your desire isn’t going to help at your next event. I would see inspectors going “Nope, cube is sliding on the carbon fiber, not allowed” and have you say “Well Foster said that it was OK” and having the inspector go “Yea, Foster, we know him, but that doesn’t mean it’s allowed”.

Do the Q&A, and bring the answer to your next event, you’ll need it.

So, is using gorilla tape to prevent cubes from sliding out of a grip illegal?

or is it just an overly cautious inspector?

There’s no such thing as an overly cautious inspector if the inspector’s rulings are within the realm of common-sense interpretation of the game manual and Q&A.

Whether or not your decoration might serve a functional purpose is up to the discretion of the referees and inspectors, not teams.

That is most definitely illegal.

Thank you for that. I will share this with my team.

absolutely. I meant to quote that inspectors have final say. I’m not getting anything more than a “be careful at state, US Open, and Worlds” from our inspectors. I would just like to be sure I’m within the rules before I get to an important tournament and have to do inspection twice because of a rule about stickers on your robot

I would err on the side of caution and put your carbon fiber on the opposite side of your Lexan that does not touch the Cubes.

As you seem to realize, a decoration is simply not worth the hassle of potentially having to be inspected twice at a large event.

Wasn’t this just asked on the Q&A? I seem to remember hearing about this exact topic

Yes, that was my coach. I wanted to ask on here as well to get a few opinions. It takes a while for a response on the official q&a, and this is something I need to know about before I go much further on my robot. I figured if the overwhelming response was negative, I would go ahead and take the carbon fiber off to be safe until I had an official response to abide by.