We all know that with the release of V5 the old control system will be Recycled as the part of V5 trade-in program and the number of motors will be Reduced from 12 to 8. 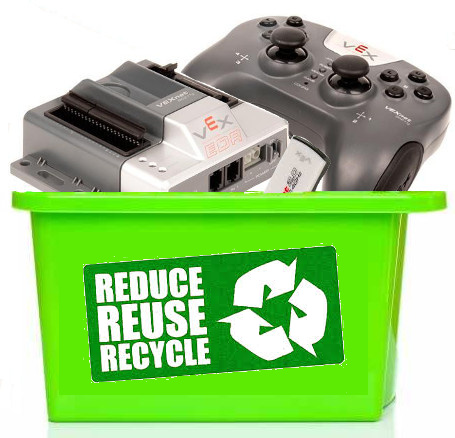 But what about Reuse?

After upgrading there will be left plenty of perfectly functional components that are not compatible with V5: 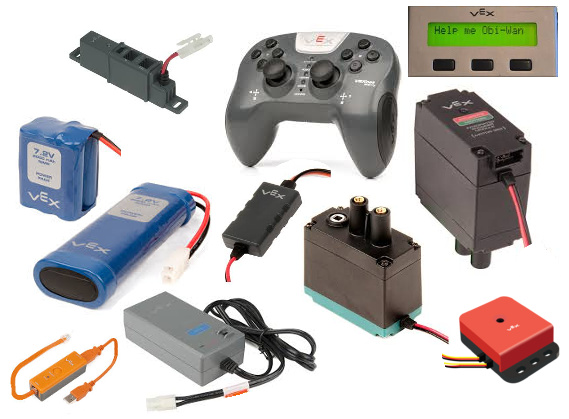 Recycled components are: Cortex, primary joystick, and a pair of VEXNet keys.

Reusable components would include: partner joystick, 7.2v batteries and chargers, power expander, motors and motor controllers, programming kit, LCD, and some sensors that would be obsolete with V5.

Could we find a good use for them, because in most cases it is pretty good and reliable hardware?

For example, you could always use VEX batteries, power expander, and motors with your Arduino projects. Here is an old discussion about that.

I would like to start this thread so that everyone could share ideas about giving new life and creative uses for all those components. Any ideas are welcome.

While the current system is still legal, one way to reuse parts would be to give them to teams who cannot afford to buy new parts. (The starter kits have less than 12 motors, and many teams will still be using their existing kits even after V5 is introduced.)

Even after the current system is phased out, the parts could be used for classroom use.

[Edit: If you have multiple teams, you could give the parts to another team in your organization (especially one that otherwise might not have existed otherwise), and either way, you could use them for classroom use.]

P.S. Based on what I have read about electronics recycling, I suppose these same things might be done with the traded-in products if they are in good shape (unless there is a reason that this would not be feasible).

However, the recipients of the used parts would need to understand that it may be impossible to guarantee that the parts will work and not malfunction. It would take a lot of work to inspect every Cortex that is traded in, so it would be understandable if VEX cannot do this.

Plus, if a part became dangerous, I assume VEX could be held liable if they were involved in passing down the part. If so, it might not be safe for VEX to pass down the traded-in parts unless they were able to prove they were safe.

While the current system is still legal, one way to reuse parts would be to give them to teams who cannot afford to buy new parts. (The starter kits have less than 12 motors, and many teams will still be using their existing kits even after V5 is introduced.)

Even after the current system is phased out, the parts could be used for classroom use.

Yes, I agree that would be one of the best ways to reuse the old system, but passing used parts to another team requires the trust between both parties and, at least, one of them to be good with testing and refurbishing, which is not something you would expect from a new team.

As for the reusing traded-in parts, you just had listed multiple reasons against it. There is no good business reason for VEX to wade into re-testing, re-certifying, and re-distributing old parts. I am sure the hidden logistical costs of doing that would be higher than anyone imagines and it might be even cheaper to manufacture a new Cortex if its components are at their lowest price.

However, if some of the parts on the Cortex’ BOM are being discontinued themselves (and also Cortex specs are getting outdated) then it makes perfect business sense for VEX to incentivize people to switch to V5, remove old Cortex units from circulation, free up support resources and, eventually, discontinue Cortex production and warranty program.

In any case, for the purposes of this thread, lets assume that there are no more Cortex units and Primary Joysticks.

Now, what do we do with the remaining parts that are not V5 compatible?

The easiest thing is always to toss them into recycling bin and forget about them, hoping they don’t end up buried in some distant landfill. However, part of this program is to teach students how to find creative solutions for diverse sets of problems.

If we want to live in more sustainable way, we could use this as an educational opportunity for our future engineers.

After upgrading to V5 many teams will be left with perfectly functioning components each of them having a high carbon cost of manufacturing. They already paid for them and recovered some costs (by using them with Cortex) - so those parts are, essentially, free for any secondary use.

I challenged some of our students to think about reuse cases that would make practical sense and would like to extend the challenge to anyone who might be interested.

My original plans for this thread was to fill it with fun examples of giving second life to the old components mostly outside of the competition. However, the V5 upgrade is unfolding with more interesting twists that anyone could originally anticipate…

Introducing a life hack for the teams who was lucky to receive V5 bundle, but are still waiting for for the second V5 battery to arrive.

This portable charging solution can be used while waiting in the queue or at the practice fields to top off your V5 battery. This will give a second life to your old Cortex batteries and a couple of power extension cables (or you could crimp your own tamiya connectors). When fully charged two 7.2v batteries will give you closer to 8.0v each so their output when connected in series should be enough to match output of V5 charging adapter, rated at 16v / 1.1A.

This took about 5 minutes to build and the most important step was to ensure that output polarity matches what V5 battery expects: positive on the inner terminal, negative on the outer. I used an old 9v phone charger (for the plug), small twist-on wire connectors, and an optional digital voltmeter to monitor battery status. The parts cost less than $2 if bought online (would be slightly more expensive from a local hardware or hobby store). I would assume that you will need to use some soldering, electric tape, and hot glue (or 3D print a case) to make it more robust in the chaotic competition environment. Separate thread to discuss this idea could be found here: https://vexforum.com/t/portable-charger-for-v5/50657/1

Making your own battery charger is a violation of <R14b>.

I wouldn’t give a portable NiMh Battery Pack charger much life before they begin to decline, that was one of our most replaced items (along with motor controllers and 393’s).

You could also connect the batteries into a regular female two prong plug, that you plug a legal v5 Charger into.

Is the existing Vex metal compatible with the aluminum supplied with the V5?

Is the existing Vex metal compatible with the aluminum supplied with the V5?

there is no new v5 structure parts. its all the same.

Thanks! Sooooooo…what to do? Buy the old VEX Legacy or jump on the band wagon (albeit broken at this time) and purchase the V5. And who knows when it will be available again???

there is no new v5 structure parts. its all the same.

Not that it matters for compatibility, as yes, you’re right, they’re all interchangeable, but isn’t there? I could have sworn one or more of the V5 packs had a new structural piece.

Here it is: 1x1x35 Aluminum Angles

I really wish we could get those separately. Lengthwise cuts are a pain. One of my students just destroyed several pieces trying to cut lengthwise and not being careful enough.

You can order them from roboSource.net

Robosource isn’t a reseller. He sells tools and other vex related stuff.

The 1x1 angles we have are made by buying C-Channel from VEX at retail, cutting it in half, and then selling it. All the other parts we sell are commercially available equivalents to VEX parts that are allowed under rule R7. As we are not a VEX reseller and can ship anywhere in the world. We’re actually located in MA too!