Alright this Was the first design we made in a week and a half about 3 months ago. On monday or soo I will reveal the new one we’re using for the Puerto Rican League.

The new version has obtained Tournament Champion in north Tc challenge and programming skills. And in the west Tc challenge we obtained sub champion and robot skills champion with 75points.

Any questions feel free to ask and keep in touch for pictures of the new version soon. 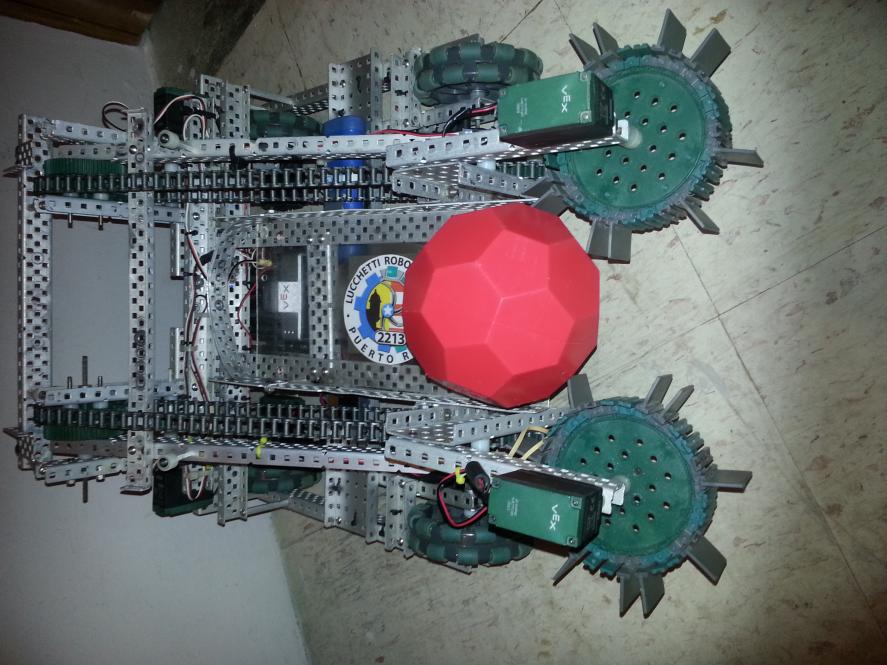 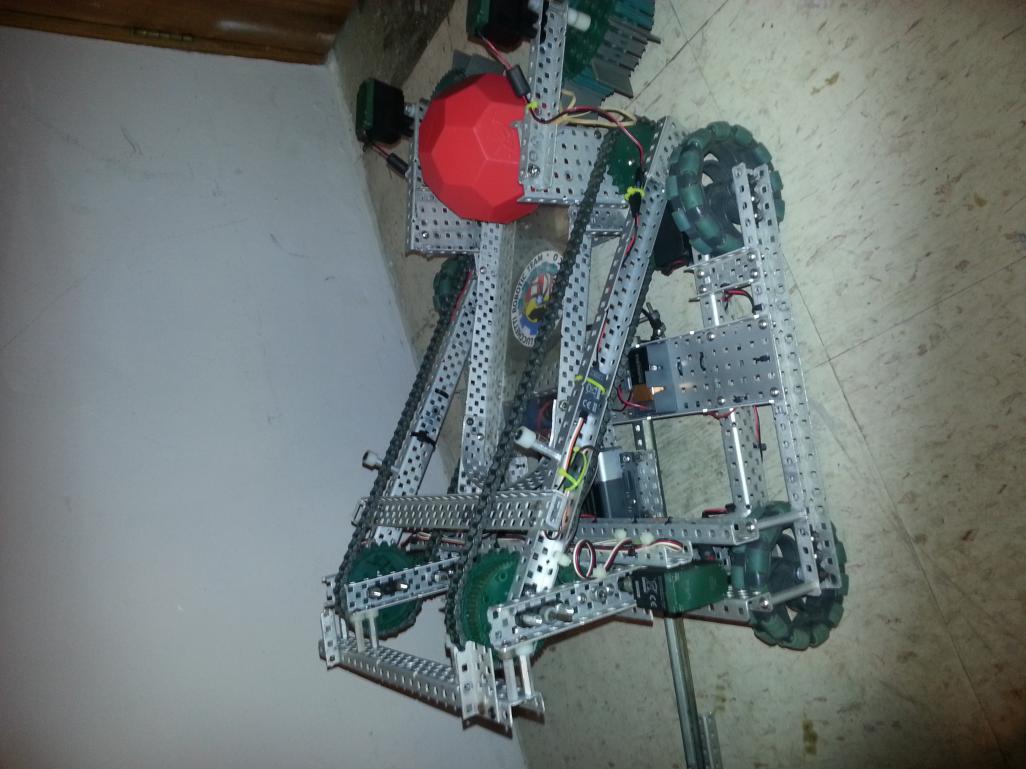 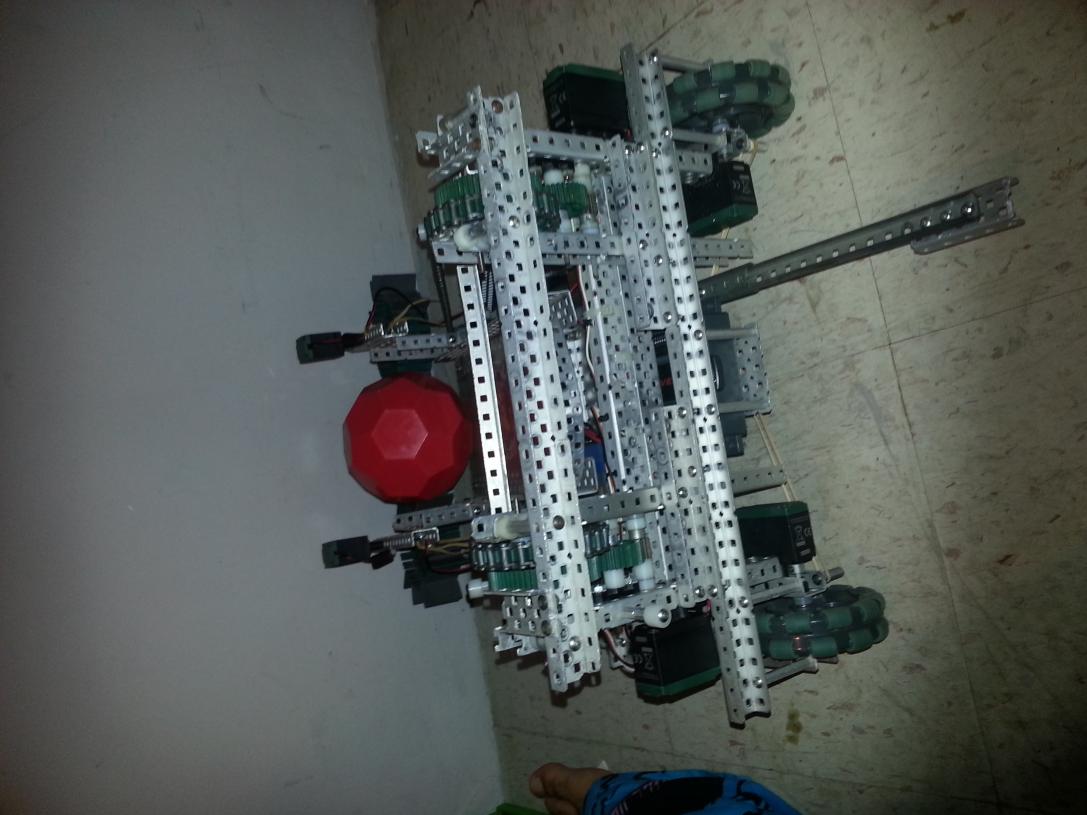 A little update on the thread, take guesses ill be posting more pictures shortly, these are of the puerto rico north tc tournament and programming champion, and of the west PR TC robot skills champ and tournament finalist. 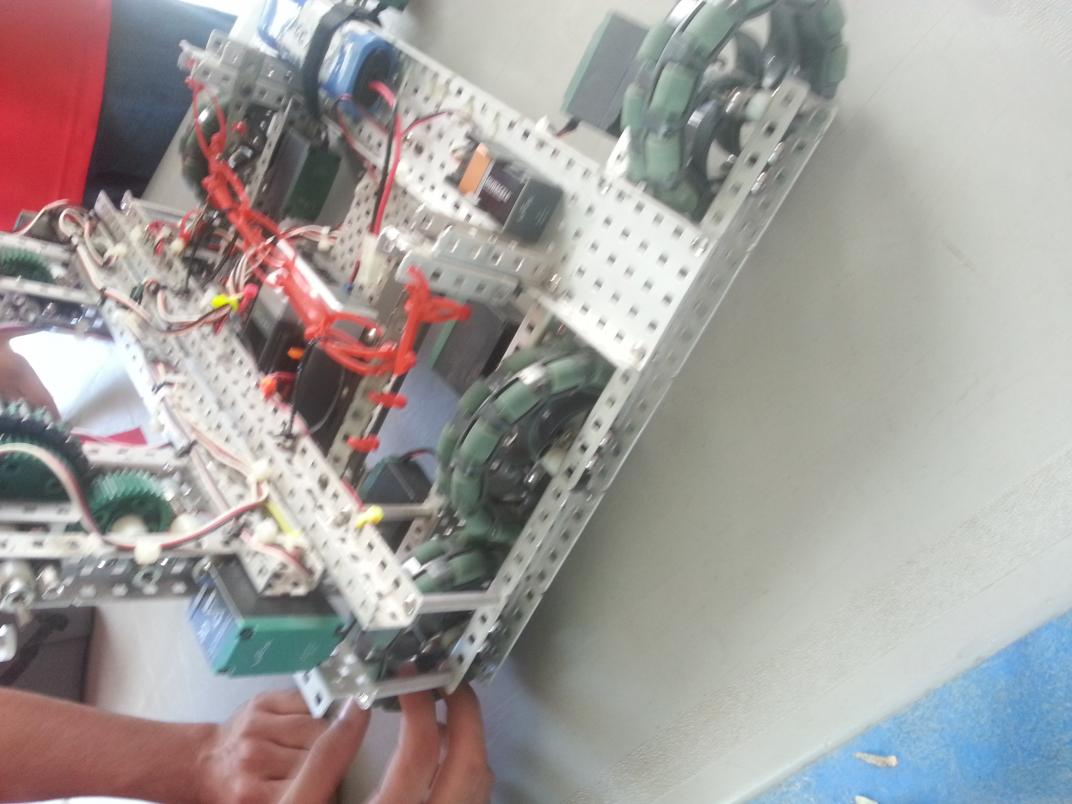 The robot skills achieved with this robot has been uploaded to robotevents.com heres a pic we are currently rank 13 with 75pts

Feel free to ask for anything and ill gladly try to help in any way posible. 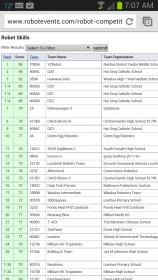 The linear slide sticking out the back of the robot, is that for stability when going over the bump? What’s its purpose?

The linear slide sticking out the back of the robot, is that for stability when going over the bump? What’s its purpose?

Actually our robot has one of the fastest drive trains in PR the linear slide is used as a wheelie bar for when the tower is completely raised and we start acelerating it dosent fall backwards fully and gives us time to make the drive run backwards and re-adjust the robot to have every wheel on the ground.
Heres a picture of the back part of the robot, any further questions feel free to ask and I will be posting pictures to help explain as best I can

Ps. It is normal 6 wheels with 393 motors on speed. The design though weights a good balance making it have a good grip on the pads while not weighting too much allowing it to move faster. Let me add we have already broken 4 omni wheels due to the speed at which it runs and can change the direction it currently is running 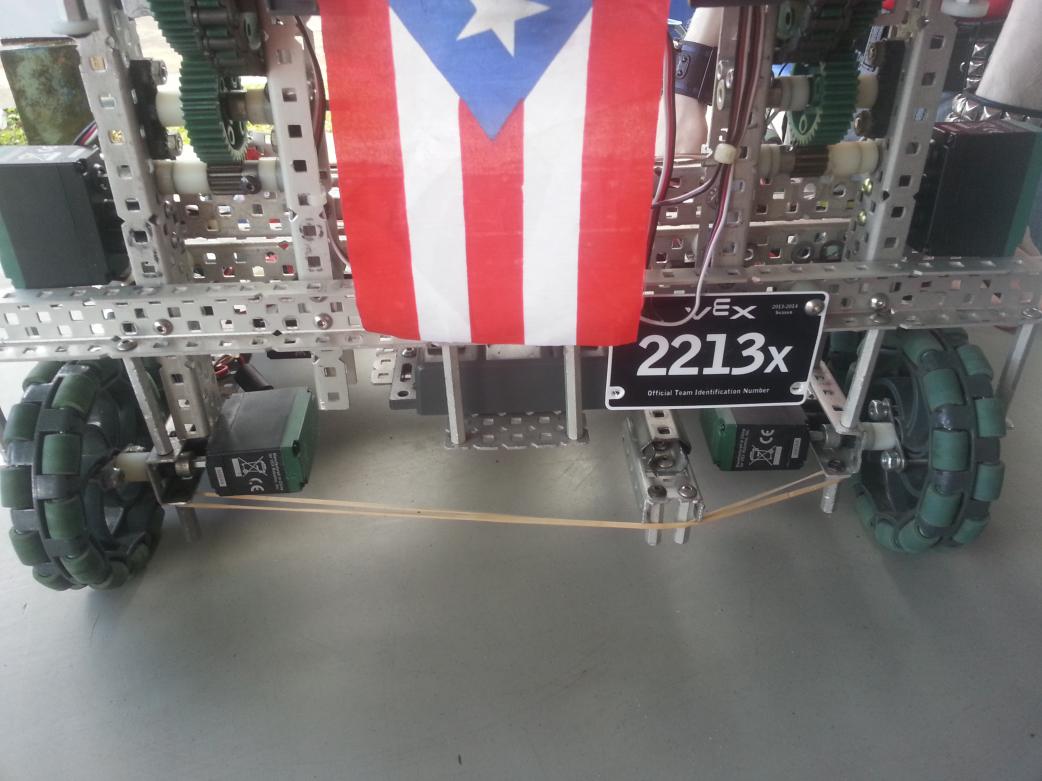 How much of an improvement did you find in adding the locking bars to your omni wheels?

Mainly we added the lock bars to the omni wheels so we stopped breaking them, effectively it worked and in addition our robot also became a bit faster but it was mainly because the shafts dindt dance Inside the omni wheel anymore.

Feel free to ask about anything on the robot and I will try my best to answer. In addition I will try posting pictures with the answers. 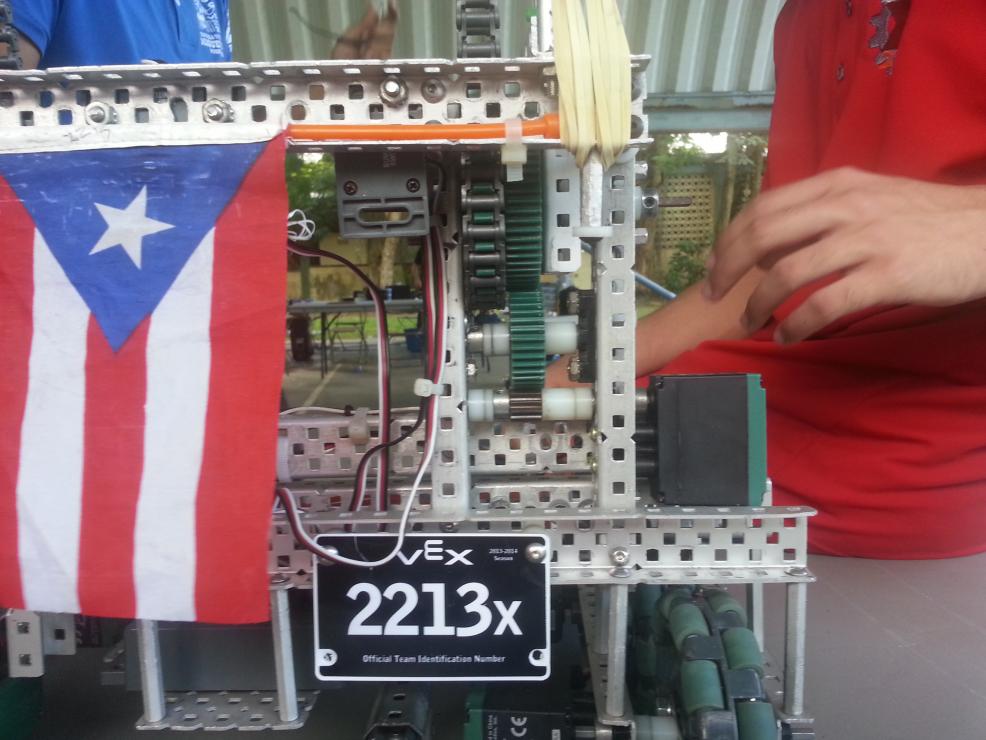 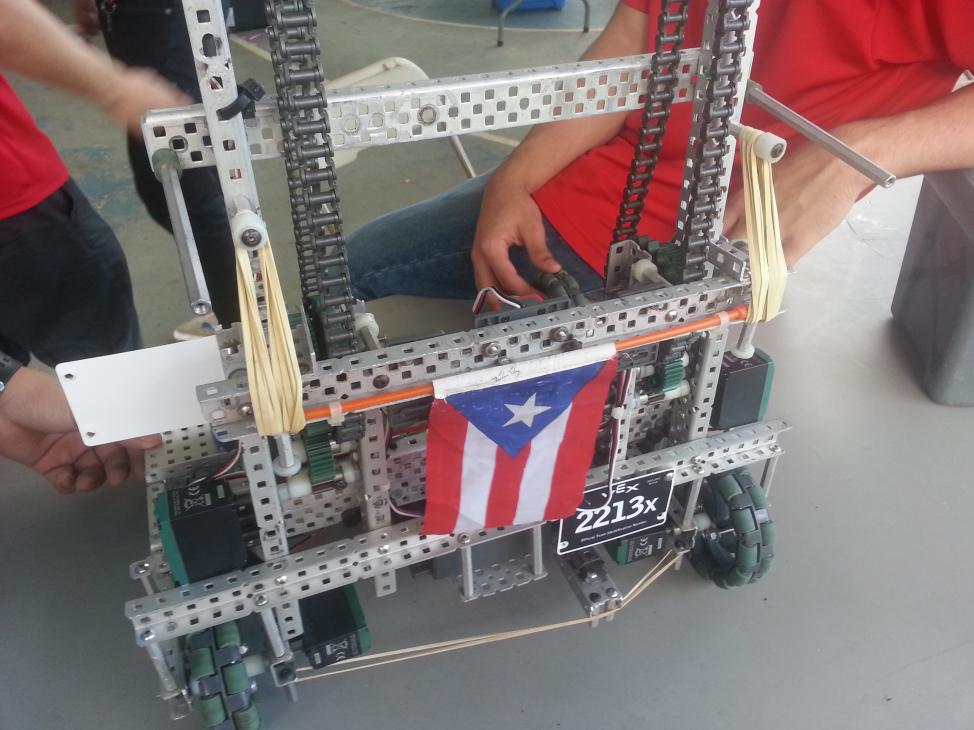 How well does the Chain Bar work, and have you had any problems with the chain breaking?

Also, what is the function of the rubber band to hold the linear slider, wouldn’t that be counter productive?.

I like the Flag on the back, it is a nice decoration, and I like the what, 8 rubber bands on each side!!!, My robot has that too!
I also like the locking bars on the omni wheels, I will try that with my mechanum wheels

I also wonder, do you use all steel, and how heavy is the robot.

Also you used only a 1:5 gear ratio on the lift, but with a 36 tooth gear in the middle, I would suggest putting the 12 tooth directly to the 60 tooth to reduce friction.

Overall, very nice robot though. Well Done, I hope to see you at worlds!!

snip
I also wonder, do you use all steel, and how heavy is the robot.
snip
QUOTE]
from looking at the pictures, it looks to be all aluminum

looks like a great robot. perhaps Puerto Rico will make as strong a showing as in round-up.

Thanks to both of you.

The robot is full aluminum weights ruffly 12 punds, im not really sure. The rubber band was only there to hold it until the match.

Thanks, the lock bars do help, considering we stopped buying new omniwheels. We broke 4 in less than a month before putting lock bars on them.

And you were close it was 7 rubber bands!

I put the idler inbetween because the only sprocket we had for the chain was bigger than the spur gear for the 5:1 ratio. So we had to put an idler in the middle to be able to pass the power from the 12 tooth to the 60 tooth one. The biggest problem we’ve faced is that if we dont use rubber bands it breaks the idlers teeth apart from that it worked perfectly.

Thank you, I hope I can attend this is my 2nd and last year in vex High school and I really want to go to the worlds. Last year we came close and lost on the last tournament.
Ps. I believe it was like 4 years ago my school achieved a finalist on the tournament. Right now we are rank 13 robot skills world wide. We hope to maintain and raise to the top 5 ranks in robot skills

If youre interested in any further pictures feel free to ask I made sure to take more than enough last time I had it.

Hope you guys make it too and see each other over there!

Thanks to both of you.
The robot is full aluminum weights ruffly 12 punds, im not really sure. The rubber band was only there to hold it until the match.

And you were close it was 7 rubber bands!

Ok, I see the aluminum now. I also am seriously considering a chain bar now, thanks!!

My robot had 8 rubber bands and had almost the same look, but if only 7 works, great!

Are you worried about (or have experienced) being pushed sideways? I saw several robots being pushed is the asia pacific championship and that made several teams lose. How will you handle that?

It is a great lift mechanism to use. I am the driver of the robot and found it rather easy to control and fend off against pushes it had enough strenght to turn to the sidexand push back the other robot. In addition having the chain made ot very light on what its load was so it couldrun around the mats easier.

This said, may the Robot Rest In Peace, he was known as Chuito The Caveman. We decided to try a new desing and see how it works out and if it fails we can go back to the original. We began having inconvenience with teams understanding how to fight our robot. To coubteract we decided to make a new improved one. 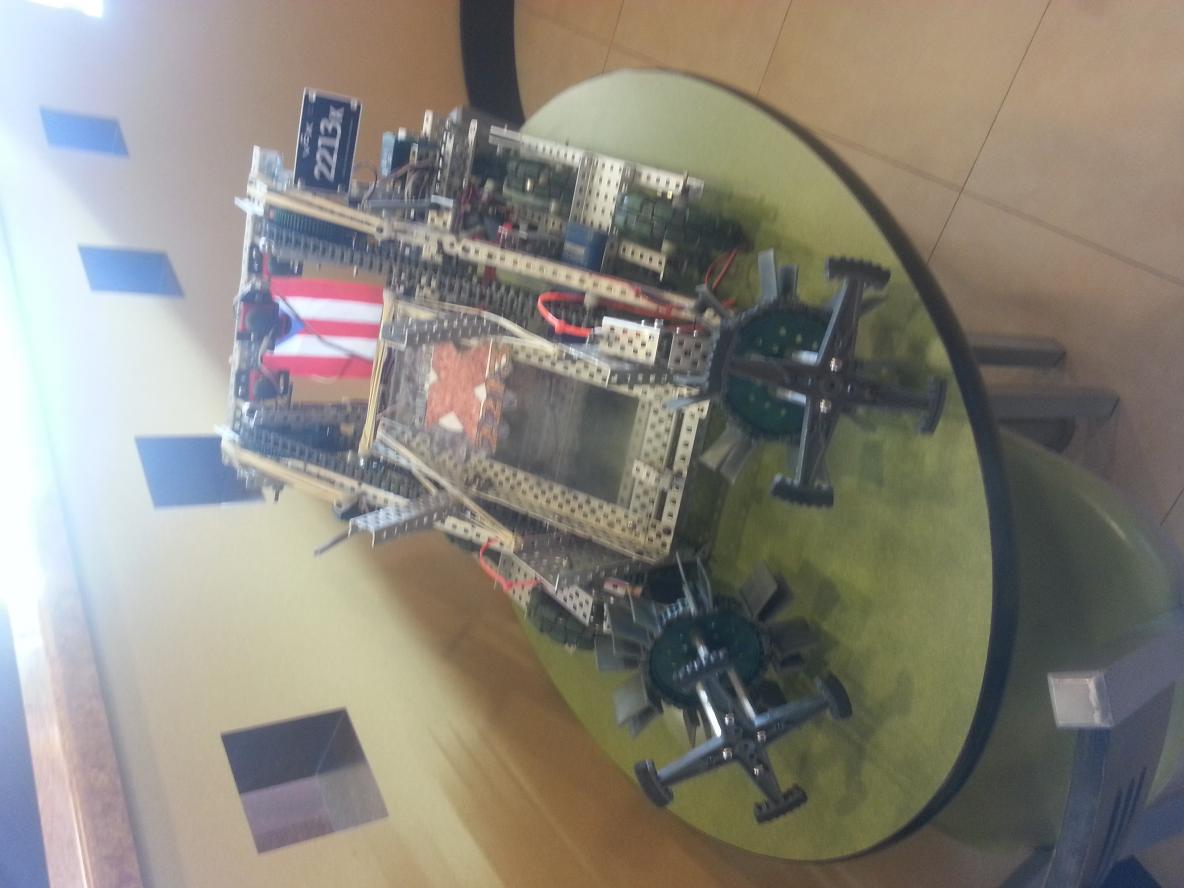 Your robot seems pretty efficient, any video of it in action?