The new RoboRally game Rough Road is here. This game allows VEX and FTC robots to compete in a racing style game, with a number of different objectives and ways to play.

The game manual is in the below link.
Game Manual

Sign Up for the competition on the below link. Registration is $30, payable by check or cash at the event.
Sign up

Just wanted to add a few clarifications to the rules about the game weights.

Looks like the latest copy wasn’t uploaded previously, so I will update in a minute. Here are the change being posted.

Game weight is a 2 inch diameter pvc pipe. The 4 inches in length doesn’t include the end caps, which will make it a bit longer. Exact dimensions will be up later this week, with pictures.

After showing the rules to my team, I had to make a number of rules clarifications.

RR12 – Robots that don’t move off their starting tile can be worked on. This only applies to the robots in the alliance starting tile next to the field wall.
• The intent of this rule is to allow teams whose robot isn’t working may still have a chance to play the game.
• This means plugging in batteries, turning robot on, and so forth.
• Only the robot in the tile next to the field wall, that no one is reaching 2 feet across the field.

Weighted Game posts - Will they be crammed full of sand, or something else. Do you know what their approx. weight will be?

They will be filled with sand, weighing about 10 pounds.

Ball towers - One tower or two?

The ball towers are made up of a couple pieces of aluminum 1" square tubes. The aluminum will be connected to the wall, at the place where the two wall parts come together. The drawing in the manual shows what is looks like.

Goal Tower - Placed there at any time (for points at the end of the race). May the be taken out? If they are taken out, does that wipe out the potential points?

Once a game weight has been placed in the goal tower, it may not be taken out

RR2 - Strategies and actions are illegal. Designs that the referees decide will obviously, substantially impede traffic while also fulfilling some other aspect of an otherwise legal strategy might be disqualified from competing – The referees will make these decisions.

RR8 - “lose”? If they lose one accidentally, what happens?

The accidental lose of a game weight will not be penalized

RR9 - Is it possible (and permitted) for a robot to hang off of an edge of the hill that doesn’t have a ramp?
May a robot tightly or loosely use any part of the field to anchor itself in scoring position on the hill?
Does a robot have to touching the field surface (or anything else in order to earn KOTH points?
If a robot is fully or partially supported by an allied robot, does that prevent earning KOTH points?

RR11 - If a ball purposefully or accidentally crosses over the center wall of the field in the direction of traffic flow, does that leagally advance it toward the goals line? If not what happens to it?

Yes, that advances it, but if it never crosses the goal line, it will never be scored

RR11- If the ball intentionally becomes airborne, is that OK?

Yes assuming that a robot is not carrying it

RR11 - Is loosely engulfing a ball a valid way to push it without losing control of it?

As long as you are not carrying the ball

Is a robot allowed to use a total of 10 regular VEX, 4 HS Vex, and 8 Tetrix motors? Or do they have to pick one motor type and stay under that one types limit?
Can we mix and match types? 10 Regular Vex and 4 Tetrix? 9 regular VEX and 7 Tetrix?

You have a total of 10 vex motors, which includes the 4 high strength. You may have a total of 8 Tetrix motors. If you design a robot that includes the use of All motors (VEX and Tetrix), that would be impressive. So in total you could have 18 motors on your robot. Mix and match all you want.

Here are some rules changes for the game weights. Due to me doing some bad math when I originally created this game, I had to change the specifications on the game weights a bit.

With caps on the weights, they are a total of 6 inches in length. You will notice they are a bit above 6 inches in length because the cap isn’t all the way pressed in. Also the shape of the game weight and super weight is different. I couldn’t get the weight I was looking for out of PVC, so I had to go with steel pipe. The pipe on both the PVC and steel is 2 inches in diameter, but the caps put it a little bit beyond that in diameter.

I am changing the manual to reflect this change. 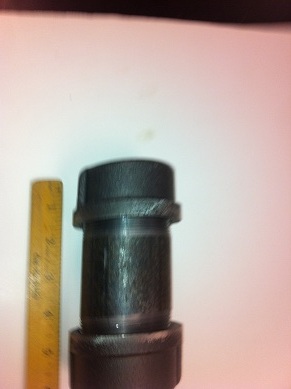 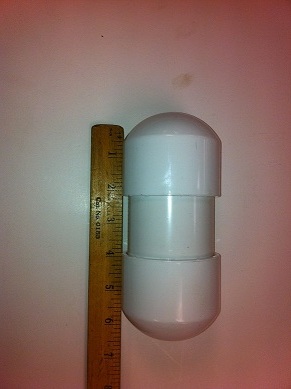 I notice in your field drawings that there is a hole in the wall. Are the dimensions of that hole definite? If so, what are they?

Sorry, for the late response, I didn’t see your post.

It is 7 inches wide, and 5 inches tall. Those should be in the manual.

Thanks. Also, can I use a signal splitter as my primary control system?

the signal splitter is acceptable.

Thanks to all the teams that came out, we are already kicking around ideas for next year!