When the robot lifts, the arms end up like this

We’ve tried a stand off cross brace and now we have 2 c-channels going across the 2 arms with spacers screwed between the 2 bars to help stop flexing (which doesn’t seem to be helping).

The only time that we got it to lift evenly is when we used 2 motors (one on each arm). But we really do need 4 motor drive and I’ve seen robots with arms that work with just 1.

Someone please help, we’ve been at this issue for weeks.

Are they both on the same shaft? That means that the shaft is twisted (replace it) or your arms have a good bit of slop (add bar locks)

They are on the same shaft but, it’s a HS shaft, so the shaft atleast isn’t twisted.

In that case I’d suggest wiggling both arms up and down and testing if one can move up or down more than the other without the shaft moving. Assuming they are assembled the same idk what would make them different but it’s worth checking

They do have slack in that way, but I dont see how we could make it wiggle less, we already have hs locking bars from robosource screwed on top of the gears.

just a few things to look at

1.Yes, gimme a min.
2.The arms are built exactly the same except reflected.
3.We recently had to take the arm apart to replace the 4.intakes with improved version, and we checked the HS shaft and it was a-ok. (The new intake itself is relatively the same weight)
5.There is only 1 motor lifiting the arms and it’s running the red cartridge.

I think it’s because the motor is powering 1 side of the arm and the other unpowered side is linked to the powered side. I would advise placing the motor in between both arms and then gearing it there, then run the axles through both arms

So my robot’s arm is powered by only one motor too, and we don’t have that issue. This is how we braced my robots arm so one side wouldn’t go up higher than the other one. 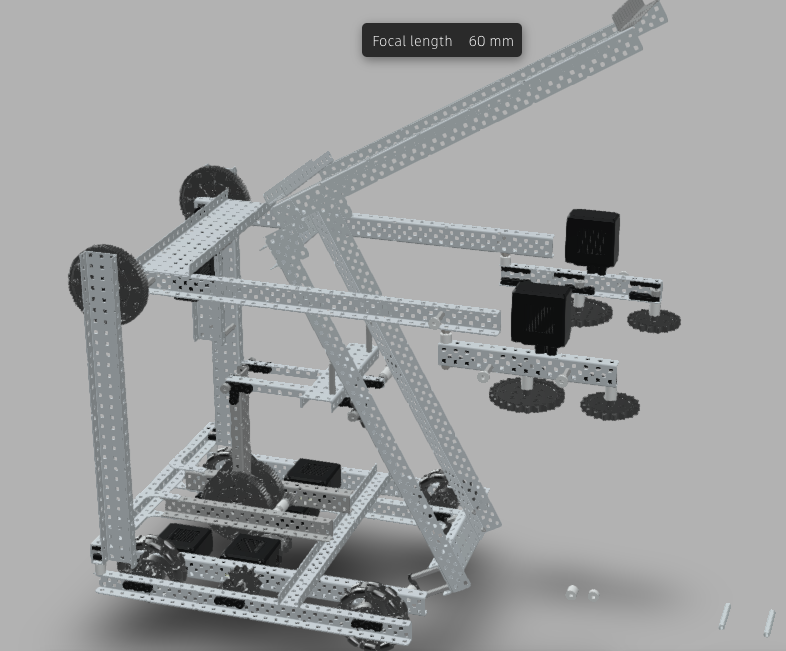 You can see the 5 wide c-channel that braces the arms.

One helpful thing you could try is adding some standoffs across the back of the two gears that the arms are connected to. Just make sure to add enough spacers / washers that it doesn’t pull or push the arms out of square. Also make sure to add washers if you do this to both sides of the gear so that you can tighten down the screws on either end without digging into the gear.