This seems completely out of the spirit of fair play, I hope the continue to clarify this back in a different direction.

They may be going a different direction with the bigger fields. Or, they may just have the kids go back to removing the elements next year.

Only time will tell. For now, the rule is the rule…

So not trying to open another can of worms here, but in the same ball park for Programming skills challenge, what exactly does this rule apply to:

This seems to me to imply similar to the original question, just with the robot not touching it. Does this mean we can move an object from it’s starting point (to any non scoring location) once the match starts?

[Avonderweidt] - so what does this mean then and what is it applied to?

The Starting Position refers to the robot’s starting position. Check the definitions section of the rules.

@Avonderweidt - sorry, must have copied the wrong thing, meant to @ you when I replied

Does this clause apply when a team is “handling” their robot, or anytime in a programming skills match? I can see how a bot is bringing and dropping cubes off in a starting position, and the “driver” is strategically repositioning them closer to their target areas.

Does this clause apply when a team is “handling” their robot

Yup. When you return the bot to a starting position.

can someone tldr thxs

That isn’t really a thing here. If you are interested in the knowledge, read the thread.

Fixed that for ya…

It’s all about the nuances of words

return the bot to a starting position.

I assume it doesn’t have to be the original starting position?

I assume it doesn’t have to be the original starting position?

That is correct. See: 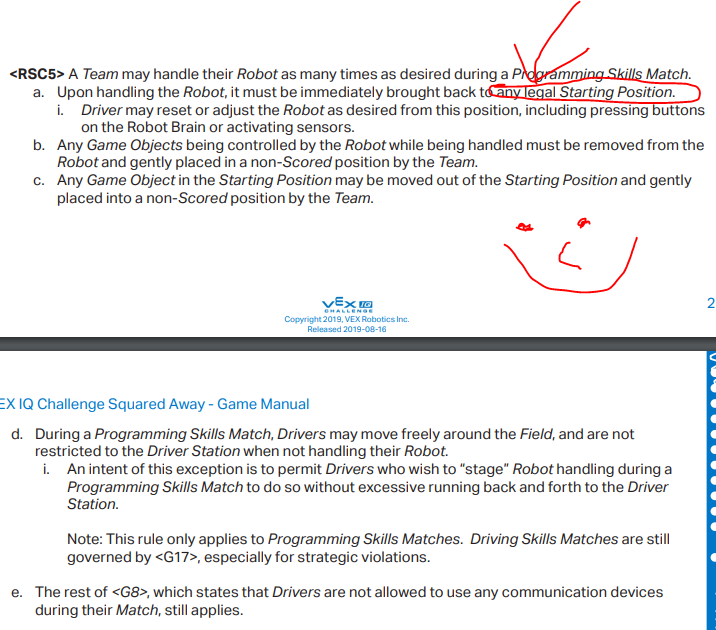 Did they ever answer this?
That’s interesting… I already posted another question to the Q&A: Can they reset the cube on top of balls?
I would say no, since that would be a scored position, and it has to be non scoring.

@Julie_Leinenbach – rules say “non scored position” and that would cover the balls, they would go from not scored to scored.