Hi,
We are Palmy Chrome from Palmerston North, New Zealand. We are trying to build a scissor lift bot for Sack Attack. It has 2 linear slides at the bottom with ratchets and motors that move towards the front pushing the scissor lift up. Here is a photo album showing the robot so far:

View the full album on Photobucket.


There is no intake/scoring mechanism attached yet, and were having some trouble getting the motors to lift the mechanism. This could be because the motors are having to push sideways to achieve vertical motion. How would i go about altering the design to allow it to lift properly with a full intake mechanism attached? Rubber bands? a different scissor lift with motors in the middle? Some fancy pneumatics even? Any advice would be appreciated, as well as any ideas on a good scoring mechanism to go with it. Cheers
Kularic
LegoMindstormsmaniac August 30, 2012, 5:48am #2

I have only built two VEX scissor lifts, but I believe that if the lift is “open” or slightly raised to start (meaning that there are gaps between the metal creating the “scissor” rather than the metal laying flat and collapsed on top of itself), it will put much less strain on the motors, keeping them from having to do that large amount of work to get the lift “started”.

Also, rubber bands (or some other form of elastic) will help out the motors, and is will help you greatly with nearly every lift you will build using VEX.

Try doing a search of the forums.
Look at this thread (clicky)

So powering the lift vertically and adding elastics are your two easiest ways to make the lift work better.

Powering the lift vertically (that is, using the rack and pinion mounted vertically between two pivots) is the best because the lifting torque required from the motor is the same throughout the entire lift.
As you rightly suggested, it is a problem when motors push sideways on the lift because the angles increase the force required from the motors when you’re near the bottom of the lift, and powering the lift vertically eliminates this.
Pneumatics could also be used in this way if it is ok to have just “up” and “down” and you don’t need to stop in between.

However, sometimes its hard to fit that in, in which case a bit of a compromise is to mount a large gear to one bar at a pivot point and a motor mounted to another bar, driving a pinion which meshes with that gear. For example, in this photo the motor is driving a 12t gear which meshes with the 84t that is bolted to the other bar. http://farm7.staticflickr.com/6105/6262173527_c3571a0a70_o.jpg
(and yes I know there are some other design problems with that scissor lift, iirc we were just testing how well the slotted angles might work as sliders, but it still demonstrates what I am talking about. By the way, the only purpose of the 36t gear is to drive a potentiometer if anyone is wondering)

Last summer, I decided to mess around with a scissor lift I over-reinforced everything, but it worked. I started by powering the slide, but it didn’t move, even with 2 HT motors. This worked much better.

The chain and four metal gears was very heavy-duty, but the gear never skipped once. 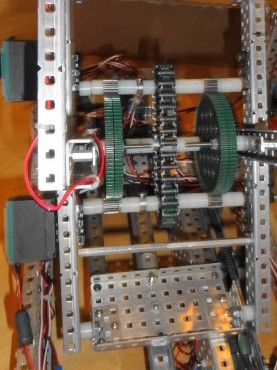 Thanks for the ideas guys, i might try something like SWTC has with a set of gears on the inside of the lift, plus rubber bands if required, ill let you know how it goes

Here is a Scissor Lift I built the other day (based on 357’s Sack Attack Lift): http://www.youtube.com/watch?v=fPK0PNdiNDo&feature=plcp

I also have a few CAD images of the Scissor Lift:

we lost 22 rack gears to our scissor lift

Wow, must have been a lot of force on those gear teeth…
Just asking, how come you didnt realize something was wrong and stop what you were doing after breaking the first couple…?

Wow, must have been a lot of force on those gear teeth…

Yes, yes there are. Order some spare gears and 1x25 now as you go through this process.

See how both those examples had a gear on the other side from the driven gear? They actually can help hold the driving gears in place a little bit. You will have massive forces lifting 10+ sacks at once on this 12 tooth and 60 tooth gear set. So it will want to push away and deform. So either the 12 tooth pushes away or the big gear pushes away. Putting a follower on the other side helps keep the big one in line a bit more. StillWearingTheClock has a chain too.

As for the forces, with the 60 tooth gear, you have about 1.25 inches for your moment arm for torque from the center of the axle to the gear teeth. If you used an 84 tooth gear (sandwiched and the nubs cut off), you essentially move out a hole giving you and extra 1/2 inch requiring 28% less torque.

Consider putting in a nylon spacer in between every metal part (they are labeled as PTFE but I really think they are nylon). Friction is your enemy in a scissor lift.

When you build this a few levels up, error between left right becomes more apparent. You can then think about a mechanical coupler between sides or some intense programming logic as the error will increase as you go higher causing lean at 30+ inches.

Our 3-stack Gateway scissor lift did not skip at all when we put high-strength gears on it. We lost a grand total of 0 gears over 3 tournaments (plus Worlds).

A middle school team from China won the middle school division at Worlds with that scissor lift setup. As murdomeek would say, you have to “do it right.”