What is your opinion on scissor lifts…

This is a prime topic for a poll…

I tried to build a scissor lift last year, but ran into problems “starting” it. (It operated fine when it was 50%+ extended, but otherwise it was hard to turn.) They work great for vertical motion, but are just difficult to build.

I’d recommend only try it if you’re up for a big challenge.

However, if you succeed, you have a great benefit of linear motion.

you started the thread
so why are they bad?
cant tell if troll or not…

To prove something, you must state that something. What are you saying it’s proof of?

With regards to your statement in another thread about how only Asians build good scissor lifts:
[http://www.vexmen.com/2012/04/vexmen-gateway-world-championships-reveal/
Look at the Nightcrawler.

Two of our teams have successfully built and perfected the Scissor. It is amazing ill post vids of how good it is later. The Chinese might want to watch out for US.

Our team built a scissor lift bot for Gateway last season. We built a new one for Sack Attack this year but dropped the design due to some difficulties which we didn’t think were worth fixing.

You aren’t really making any assertions in this post, but my guess why you might think that scissor lifts are bad is because they are much more of a challenge to build than linkages. Delivering power to them can be awkward, and unfortunately the most difficult part of motion is the very first few seconds when the scissor has to expand from being completely compressed.

For that reason, this season we were working on a gear-shifter for the scissor lift to change ratios. It was more of an engineering experiment, and it didn’t operate like we wished.

Needless to say, you can still build a scissor lift that is effective in competition… it just takes a lot of tweaking and finding what works right!

With my experience with scissor lifts, I only found a use for them if i’m trying to reach something really high and they need to stay up there.

This specific application was useful in bowled over. As you may know, the meta was to lift crates as high as possible and keep them up there for points. Because of that Scissor lifts were amazing for that usage. Another useful usage can be seen in Ring It Up. Since you gain points for lifting an ally, you can easily use a scissor lift to reach the 24 inches necessary to raise a partner. If you resort to something like a linear lift, you’re forced to place the load far away from the slide, Creating big problems in friction. If you use an arm system, you’re forced to ether create a fold out system and apply a huge torque ratio. In both cases, a scissor lift can easily solve issues because the force is much more centered and can be reinforced much more

besides being completely awkward to power and awkward to mount, A big disadvantage is how bulky it gets. This huge bulk extending into the air can greatly shift the center of balance and deprive other components of the space necessary to play the game. Also, due to the increase mass, you don’t really gain a huge benefit in torque that you see in linear slides and scoops. You don’t even get the same speed of arm systems due to the higher mass. With bigger bulk, you also have a higher maintenance. Unlike arm systems where you just need to check a few points of rotation and braces, a scissor lift may have over 40 different pieces that you need to inspect. Though good engineering may mitigate the problems you see, the time that could of been spent on other systems is just wasted potential.

Personally, Unless if the goal is to keep something elevated high once, i would resort to another mechanism. I don’t have the time or funds to make a scissor lift which can compete with other lifting systems.

We had a successful implementation of the scissors lift last year. We used 4-269 motors in a “transmission” mounted below the lift to supply power to a common output shaft which powered both left and right sides at the same time. The pickup was mostly aluminum to reduce weight with latex used to assist in lifting. To provide the power needed to “start” the lift we used two pneumatic cylinders which fired off to provide assistance in the first couple of inches of linear movement. After firing the air assist, the robot went from 0" to 10" goal height in the time it took to fire the cylinders.
We could go from floor to 30" in less than 3 seconds - with or without a load. We finished 2nd at Nationals last year (lost in Quarterfinals) and finished 7th in our division at World’s last year (lost in quarterfinals again but won Engineering Excellence). Attached is a picture of our robot fully extended in scoring mode. 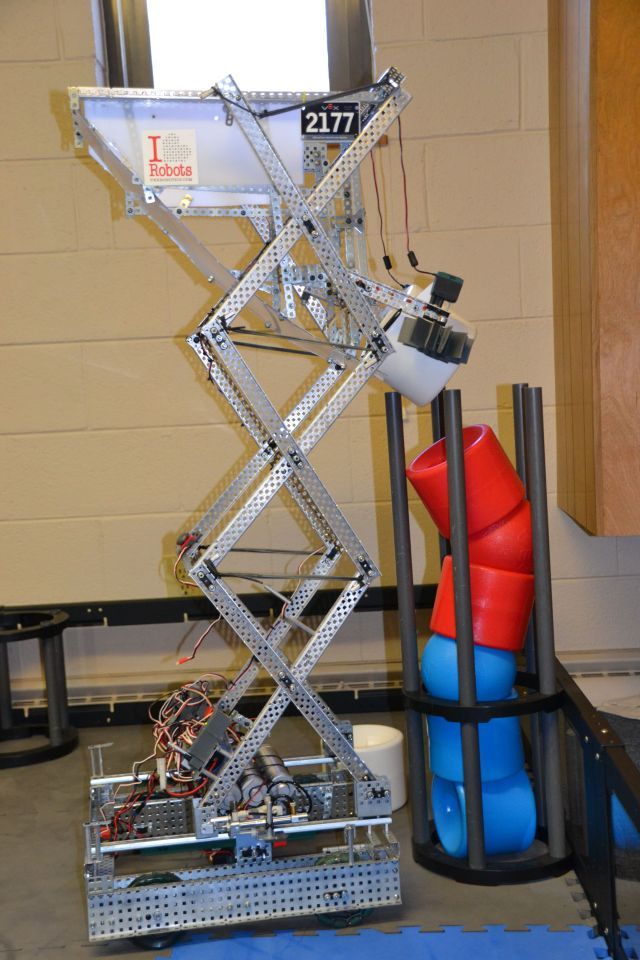 While that scissor lift may not have been the most reliable (although it may have been considerate to check with us before going out and calling it “bad”), that robot does not speak for all scissor lifts.

These robots may hurt your point slightly.
[

Perhaps someone from 4886 can tell us if this is a real member of their team, or a fake?

cant tell if troll or not…

Matt is a legitimate member of 4886X, but I do not endorse these posts. He does not speak for our entire club.

I wanted to speak my mind about this earlier, but the post had fallen quite a long way down the page and I figured it was better to let sleeping dogs lie than to revive a thread that 7581H didn’t necessarily want to have revived.

Since 7581H themselves brought the thread back up I can say what I wanted to: This was an incredibly rude post and you should not have made it. It’s one thing to say that you think a particular style of mechanism or robot design is less competitive than others, but it’s a completely different thing to call another forum member’s robot “bad”.

Teams don’t have to post their robots on the forum, but when they do it enhances the forum experience for the rest of us and enriches our community. Teams don’t get much for revealing their robots except a little exposure, and they stand to lose any competitive advantage they might have in their region or at worlds. Robot reveals are good for the forum and should be encouraged, not mocked.

What’s more, as you can see from The VEX Raptors’ signature and from [this page on the team’s website, Steve was actually quite a high performing robot. It placed highly in most of the events it went to, it won multiple Think awards, and it won the Grandville tournament (as second seed, on the top seeded alliance). I certainly wouldn’t call that bad.

Well said, Mundi.
I didn’t want to mention anything either when that post popped up, but I’m glad you did.

Moving back to the original point:
We have found that scissor lifts are a pain, but if you build/design them correctly, they can be a fantastic mechanism. Single stage lifters are especially useful for all sorts of applications, and if you actuate them near the fulcrum of the device, you can gain quite a bit of lift.

But a great scissor lift is only half of it. You need to make sure that you have appropriate, functioning sensors monitoring the scissor lift (if it’s 4 stages or more), otherwise things could get ugly fast. I recall a robot from the days of VEX Round Up that had a complete malfunction during autonomous. The arm began raising, and hit the sensor trigger. But it must have been unplugged, because it continued to raise, and proceeded to topple over onto the field. Everyone in the audience cringed at the sight of that.

One last issue (But if you use your head it can be resolved) is joints seizing. Too much friction on one joint can cause one scissor to lower/raise slower than the other side, and then the whole lift jams up.

Although all this input is compiled from what I have seen…our team has never (at the moment) used a scissor lift, but hopefully this helps the discussion out.