Scoring after Autonomous vs after the Match ends

1 Like
Rings of alliancemogos are the only scores of auto?!
Autonomous TP scoring question
How to score at the end of automatic period
Question about scoring after Autonomous
ANDY July 8, 2021, 7:11pm #2

Generally, autonomous is scored as if the match had ended, meaning both alliance mobile goals untouched are each worth 20 points at the end of the autonomous period.

But that definition also goes with elevation which isn’t scored after autonomous? How does VRC differentiate between the two?

By elevation are you referring to parking on a balanced platform?

I’m referring to both parking and elevating mobile goals. In the official Q&A there was an answered question about elevation and mobile goals. I’ll paste a screenshot below.

Thanks for sending that…I was going to post the exact same question earlier… With regards to your question, I would assume everything except parking is allowed during auton.

Thank you. I’d assume the same thing, but I wish there was a definitive way to confirm the scoring.

I, like you, are just a competitor and that’s just my thoughts but I totally agree… I wish we could get an official answer.

You could always send another Q&A to confirm that teams can get the 20pts a goal… although I’ll be very surprised if we don’t.

I hadn’t actually noticed that the definition for a goal in an alliance home zone included being at the end of the match, but since it does we can follow the same logic as elevating goals and robots (which is confirmed to be correct in the q&a) to state that goals are also not worth any points during auton.

I would think goals should probably be another Q&A, because it feels like rings being the only way to get auton points seems off… although it could be right on and auton is going to go from being like, 60-80 points for an auton win to 9-15.

If you’re right about this then

At the same time though, it would be weird if every match started off with both teams already having 40 points, so I can kinda get why VEX is doing it this way.

If you’re right about this then

oh wow you’re right. if a neutral goal cannot meet the definition of scored in an alliance home zone at the end of auton, then rings on a neutral goal are not worth any points.

I think a broad q&a about how points are scored at the end of auton is in order. Because it doesn’t seem right to me that the only way to score points would be rings on alliance goals.

The scoring rules for this game are getting ridiculously confusing

Agreed, they really need to clear this up in the next manual update.

Change Up already has precedent for starting games with points, in-person matches started with each alliance having 15 points and LRT matches had alliances starting with 57, so with a game that appears to be high-scoring, it doesn’t seem weird or ridiculous at all.

doesn’t seem right to me that the only way to score points would be rings on alliance goals.

Crazier things have happened, but I really really hope they allow goals to be scored, because otherwise auton is going to probably have a lot more ties than originally anticipated.

it doesn’t seem right to me that the only way to score points would be rings on alliance goals.

I think this would add an interesting dynamic to deciding auton strategies. If goals are worth points then the obvious option is to centre rush and gain as many neutral goals as possible since you’d need 7 ringles to achieve the same points as one neutral goal. However, if ringles are the only method of scoring then that leaves, in my opinion, two main options for an auton:

Both may be possible in the same auton routine, although I believe this would difficult for the following reasons:

well if the gdc’s goal is to make a 3 way choice for auton (rush center, win auton, or gain auton win point) than it would make sense.

However, I don’t think scoring only rings during auton was the gdc’s initial intent, otherwise they would have stated so in a clear and definitive way. Perhaps they’ll just go with the idea now that people have discovered that only rings are technically worth points, or maybe they’ll change it. either way, a Q&A is certainly in order to clarify, and in my opinion, a manual update as well to include a very clear description of what is worth points at the end of auton, otherwise there will be a lot of confusion for people who haven’t been reading q&a’s or the forum.

Unfortunately I’m not yet signed up to compete this year, and the official Q&A requires the user to either be competing or a coach in order to ask a question, so if one of you feels so inclined and are able to ask about auton/match scoring, the rest of us would be very grateful.

I’m looking through the manual again, and even scoring on alliance mobile goals seem unclear. 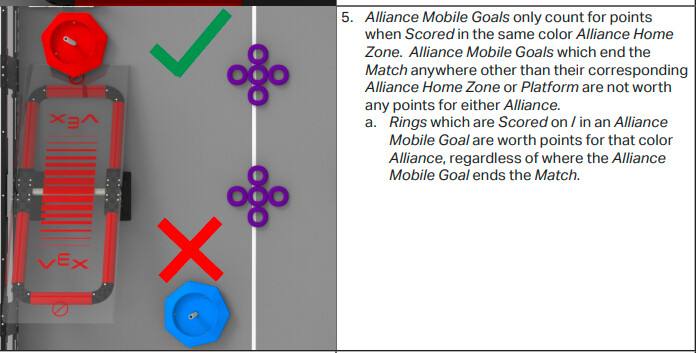 5. a. Mentions the end of the match for alliance mobile goal rings. (page 18, under the scoring section)

Alliance mobile goals don’t count for points. Just the rings in them.

I was unclear in what I was referencing. Earlier in the thread we came to the conclusion that the only way to score in auton was by scoring rings on alliance mobile goals. But after seeing this, it seems like even that might not be a viable option (until the REC clarifies auton scoring). Because it specifies that rings that are scored count for the alliance