screenshot and explanation of my transmission cad for those interested

This is a dual differential transmission with planetary based automatic speed change. the basic idea is that there are two dedicated drive motors, and 4 motors that can be switched between the drive and the lift. When the drive is only powered by the dedicated motors, it’s output is geared down. Here’s how it works. The first motor group(pink) sends power to the “casing” of the planetary gear set, these are the dedicated motors. Next, we have the two switching motor groups (blue&yellow). The blue group powers the differentials(red) with sprockets, so that both of them input spinning the same direction. The yellow group powers the differentials(red) with gears, so that that the inputs spin opposite directions. The left differential powers the drive out group(orange), which in turn powers the “sun gear” of the planetary gearbox. The right differential outputs to the lift. The output is selected by either spinning both switching motors in the same direction, or in the opposite direction. 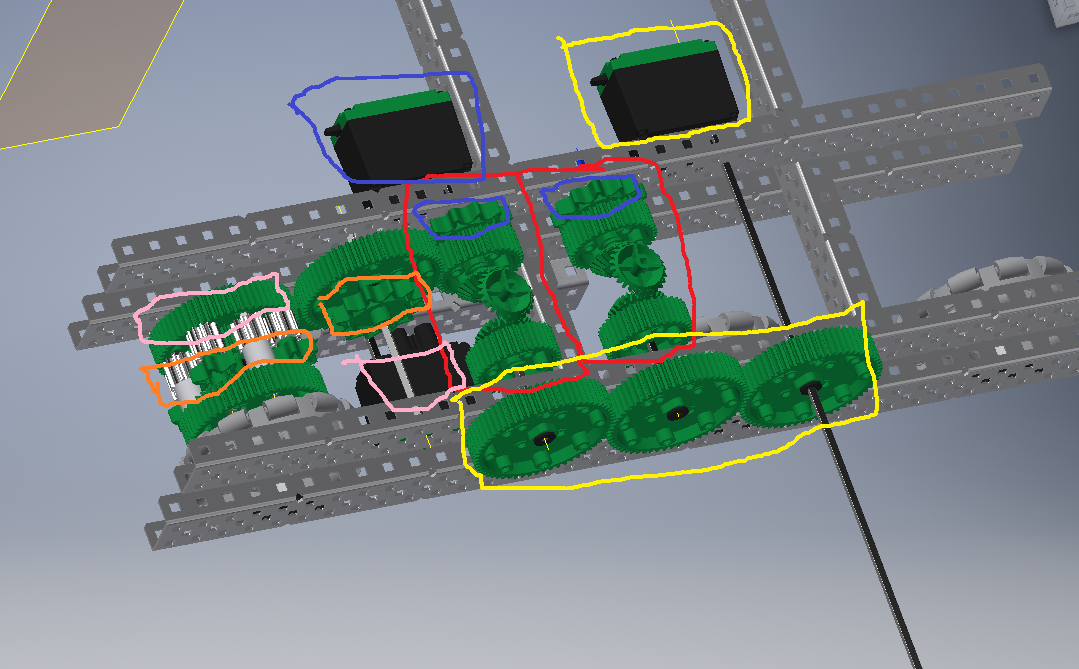 That is a work of art but what applications do you have planned for it. Was it for fun or for a bot.

That is a work of art but what applications do you have planned for it. Was it for fun or for a bot.

This is the base of my irl bot! The lift will have two dedicated lift motors, I’m using the design described here: https://vexforum.com/t/i-think-i-just-discovered-the-new-meta/41519/1

That looks really useful! Have you built and tested it yet? My team is looking for some possible transmission designs for next year.

That looks really useful! Have you built and tested it yet? My team is looking for some possible transmission designs for next year.

not yet, but I have built the sub-groups of it in the past

@antichamber, that’s an interesting idea to channel some power from the drive to the lift this way and the red part looks familiar.

However, I would caution from using pink and orange planetary section for transmission - you will see it increasing or decreasing velocity, but there is no increase in torque. If one (weaker) side of the differential is driven by a single motor, then as soon as you encounter enough driving resistance it will backdrive the weaker motor.

Also, it might be tricky to use the power for the lift, because it needs to operate very fast and you don’t want your robot wheels to move around even a bit as you are lifting. But if you use this power take off method for something infrequent and slow - like a mobile goal grabber - then it might work very well!