i was reading through the rules and found this
“a. Teams should be extra cautious when interacting with Scoring Objects. Any damage such as scuffs or punctures can be ruled as a violation of <S1>.” the balls that i use have been scuffing and I’ve seen other people talking about there balls scuffing, I’m hopeful that i can find a solution but i just wanted to get other peoples opinions.

It’s going to be tough. Ours scuff so easily, and some have split. Really disappointed in the quality of the game pieces this year.

That being said, you probably will not scuff them enough in one match or one skills run to notice. However by the end of a competition day, if there are enough flywheel launchers (most designs are), the balls will be in pretty tough shape.

When I say scuff, I don’t mean a scuff mark, that would be silly to penalize, I mean little chunks coming off of the balls, which is what we have seen. This happens whether we use smooth wheels in the launcher or omni-wheels.

During our summer program, a lot of balls got severely nicked as flywheels were being developed. However, as the designs became more fine tuned, there was less evidence of damaging the balls. Note that students were using the same ball over and over. Not something you would see typically during competition day, where a ball might get manipulated 20 times vs 100s during development.

what about this? i wouldn’t count this as a chunk but it is a tear. 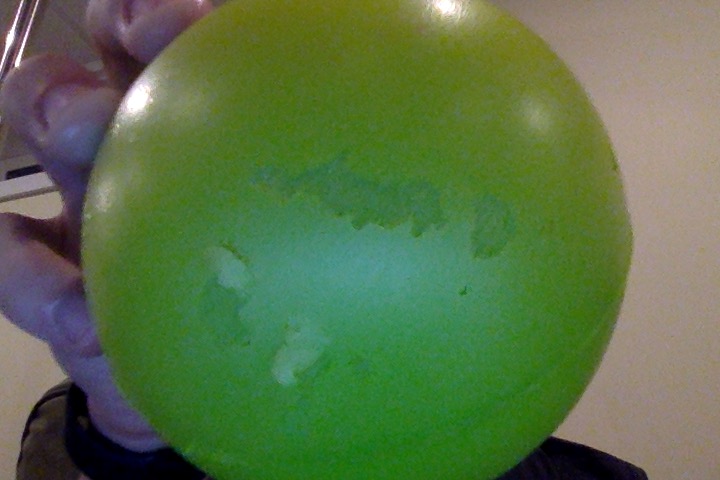 What happens when you have a single ball to test with.

Our’s don’t look as bad as those, but they are losing small nicks of the outer covering of the ball. It just doesn’t seem to be very durable.

We saw it last year at VEX worlds when the skyrise sections broke. Alliances that should have won their match lost up to 60 points time and time again because of the poorly made sections. It happened to the best of the best in middle school, high school, and Vex U. Drivers were literally testing their skyrise sections before each match to make sure their skyrise tower wouldn’t tip over and cost them the game. This sort of thing just should not happen, especially at VEX worlds. Its not fair to those teams that flew halfway around the world to ask them to accept a loss because some plastic broke.

This year, its the balls. VEX says that the inconsistencies in compressibility, density, and size of the balls is due to bad polyurethane equipment. Well, maybe if your world-wide company is selling sets of polyurethane balls to over 10,000 teams in over 30 countries, you ought to invest in some high-quality polyurethane machinery. And what about putting a protective coating on the balls or at least allowing minor damage on the balls to not result in a disqualification from the match? Is it fair to the team that spent thousands of dollars on their robot, field, and RobotC license, to disqualify them because a minor chunk of the ball got scuffed?

My objective here is not to criticize VEX for making bad game pieces, and I don’t mean to suggest that VEX is not trying to build high-quality game objects. I am just trying to throw out some insights so that next year, or the year after that, or in 5 years, the game pieces do not represent yet another problem to overcome in the course of the competition.

The issue here is that VEX needs to quickly define what “scuff” means early in the season, meaning the next manual revision. Because the thin outer jacket of these balls, formed during the process, comes off very easily. My point is, there really is little doubt that a flywheel system that can pitch the ball across the arena will scuff the balls. Because they aren’t made to handle it. So, if the teams are expected to all build a launcher that truly does not scuff the balls, like a choo-choo or such, then there should be some discussion about it on the forum simply because it appears at least > 75% of all launchers are flywheels presently.

Also, if it is poorly defined, teams will make it through their competitions then get stalled at State or Worlds because the definition isn’t succinct enough.

This is certainly true, especially because everything is at the “head referee’s discretion.” If team 1 makes a minor scratch on the ball, then team 2 makes the scratch a bit bigger, then team 3 makes a parallel scratch, then team 4 makes that minor chunk of the ball fall out, who gets disqualified? Its not as if the game pieces are fresh at the beginning of each match.

Worse, what happens if the referees miss something? In the above example, if the refs don’t notice the damage to the ball until team 5 comes along (its not as though they carefully inspect each ball that the robot came in contact with to see if there is any damage that is worthy of a disqualification), team 5 might get disqualified for something that was the collaborative fault of 4 other teams. Just like last year with the bad skyrise pieces, better teams will lose or get disqualified against worse teams because of bad game pieces.

Our schools robotics teams have had the scuffing of the balls to.

We’re using flywheels too and ours are still in really good condition. You’d have to be doing something serious to actually be taking chunks off the balls.

We’re using flywheels too and ours are still in really good condition. You’d have to be doing something serious to actually be taking chunks off the balls.

there are several reasons for our damaged balls

If it’s happening that easily, how do they decide which robot damaged a ball? they won’t see the damage until they reset the fields. Then what? it was probably from 34 matches ago.

Some of our balls were split upon receipt a well.

By damage, I don’t mean they are being gouged, just that the outer coating is flaking away.

Some of our balls were split upon receipt a well.

We’re sorry to hear that your game objects were damaged during shipping. Please email support@vex.com with your VEX order number and a description of the problem so we can correct this.

I wanted to address a few points here.

Thanks for addressing this Karthik, it was important to clarify with respect to flywheels because it could have caused a lot of consternation at the beginning of the season.