My opinion differs. I learned how to innovate and invent designs on my own from having tutorials explaining complex mechanisms, which I then learned the techniques to creating my own from. It is better to have someone inexperienced build something that they don’t fully understand the design and reasoning of, then to have them never improve because no one ever showed them how a complicated mechanism worked.

IMO It’s okay to explain to someone how something works but I don’t think tutorials for refined mechanisms should be made because a lot of teams aren’t going to try to figure out how something works when a tutorial exists, they will just blatantly plug and play the design on to their own robot.

I tend to agree with both these points a view. On one side you want to help younger teams get a strong foundation, but on the other end you want them to figure things out for themselves and evolve. For younger teams I think tutorials are fine, for my ITZ year I went full on meta, but the next year I ended up going angle adjusting kicker/slapper.
So as the teams get older they need to move away from the tutorials start making their own identity.

If teams are genuinely getting upset over a little cube lock being leaked, i may just go ahead and make a tutorial of my own so they wont say anything, kinda weird that these so called “power house” teams are scared of inexperienced teams that can’t build it on their own. 574C did a tutorial on a puncher last year simply because it was a hard to grasp concept for some teams. Vex should be about helping the teams and kids that can’t do/build something do better

This would be greatly appreciated!

Okay this entire thread is kind of dumb. VEX is a competition, its in the name. Part of competition is being better than your competitor, and if a cube lock makes you better than a competitor, then you have a right to keep how you made that to a specific amount of people. Frankly, the max amount of public sharing that should be passed is in Reveals, Matches, or Skills runs. in the case of 2114X. Sharing the concept is a great idea that is good, but making a step by step tutorial is frankly stepping over the line, especially if you (alledgedly) copied another team that wanted to keep it private. The reason its kept secret is because not everyone has the knowledge on how to do one. Its like if you had made this insane Tank for a war. You use it during battle, meaning the enemies see it, but then one of your allies releases all the blueprints for the tanks. You now lost that advantage.

Vex is a strongly knit community, but its still a competition

While I agree with some of the points you’re making, it is after all a competition. If you aren’t playing to win then what are you doing? And yes there is the whole learning argument, but if you’re working hard to win are you not learning?

I also agree with sharing ideas because that’s quite literally what we do here and on the discord. But the problem comes when people start taking and sharing pictures of other peoples robot. I understand what Taran was trying to do but it could have just as easily been done with sketches or permission to use another persons robot.

Basically what I see happening here is select elite teams keeping quiet about cube locks in the hopes that the rest of us will never figure it out. But this is where things start getting preposterous. If an idea is simple and useful, like a cube lock, then other people WILL figure it out. might take longer without your help, but they will. And to attempt to stop people from learning how to make cube locks is in my opinion, not ok.

When you say this you make it sound like this isn’t a competition. The way it works is that people watch match vids and see that a robot has a new an innovative idea and the sad part is that the instant reaction is to figure out how to copy what theyre doing. Its supposed to be “Wow, that’s cool, how can I design something myself and adapt this to make sense with my robot and what im doing”.

Just some food for thought, feel free to share your ideas on what I’m saying

It’s the same thing with the lock. A tutorial for making a cube lock doesn’t mean the team is gonna succeed at it or mean that they will be able to make a completely functional bot. The lock is a very small part of the bot.
Now I don’t care who you are you can’t force someone to not share a design of there robot just because it’s similar to yours. That’s not okay.

Now as I’ve said I personally don’t go passed reveals, but that’s my preference. I can’t force someone else to not share.

this is very true, and a good point. i agree

Sure, No team will make a 100% accurate cube lock as one in a tutorial, but thats because there is no such thing as 100 percent accurate in vex. Its not a cool move to make a tutorial on (allegedly) someone else’s design if they wished to keep it private

Well now that we are all talking about cube locks, anyone have a tutorial?

Don’t even. Read the OP again if you want. Xenon is actually aware of the situation.

Personally, I understand that people consider that cube locks a huge advantage, but they really are not. If a team is good at strategy and thinking the advantages of a cube lock are mostly gone. For example, in qualification and eliminations you have so much time that if you have a decent tray that can stack with ~ 1 minute left you can easily put all the towers and descore some. As for skills with a good strategy you don’t need to rely on a cube lock. The biggest advantage is in programming skills which can one again be mitigated with a good strategy. Of course, a cube lock still has an advantage, but this program has been put way out of proportion.

I do not know the full story, but whatever happened with Taran and the threats presented to him should not be happening. However, if you took some else’s exact design should not be released without permission. The concept has been released and it is pretty simple. No good vrc team needs instructions to build it.

I’ve been noticing a lot of secrecy around the concept of a cube lock.

Weird, I haven’t. When I last saw it discussed, the students that built one explained the concept: “a thing that goes down when the intakes go down and goes up when the intakes go up, actuated by the intakes colliding with a bit that’s mechanically linked to the locking bit on the side.” They weren’t trying to keep the details a secret; they just thought that the explanation of what it was and how it operated would be sufficient to recreate it. (I still don’t know exactly how they implemented theirs, but there’s at least two different potential methods that I can think of from that blurb.)

I think a lot of you are missing the point.

If you have a unique cube lock, and you don’t want to share designs, thats ok. your design, your choice.

but you shouldn’t be stopping other people from sharing their cube locks.

and just to clarify, I have no desire for everyone to make detailed tutorials for everything, that’s not what I think we should be doing. but if someone does make a tutorial or reveals their design, it is not ok for teams to try to keep them quiet so that nobody had access to a tutorial that they could use to better their bot.

That reminds me of “the secret” of angled flywheel hoods from Turning Point.

Despite efforts to keep it secret by some teams, it took very little time to have full details published on Discords…

Ok sure, but the tutorial in question (allegedly) Had the same cube lock as another team that wanted to keep it private

Sharing ideas is great, but to me, the tutorial Taran uploaded crosses a line.

Why, and where did Taran’s tutorial go?

Did he disclose any specific propitiatory “patented” design and someone’s attorneys sent a take-down notice to forum admins?

It looked to me it was his genuine implementation of the cube lock, that he put his sweat and effort to build and make a tutorial. It seemed to be somewhat overcomplicated with bent HS shaft and such, but it was well done to explain problem and solution.

Since I cannot link to Taran’s tutorial, here is my interpretation of cube lock design: 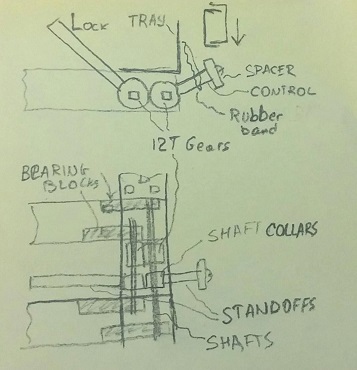 Can I share it with the world, or talking about any specific implementation of this general idea is now off limits?

Why, and where did Taran’s tutorial go?

[EDIT - per post below, TaranMayer asked for it to be closed. “It” in this case being the thread that was originally a tutorial but changed from that along the way. Having watched that thread unfold, I respectfully stand by my original assertion that it would likely have been locked/removed anyway. In no way am I commenting on the “right” or “wrong” of the matter discussed, but rather the way the discussion itself took place. A reminder to all - keep things civil and threads aren’t likely to get shut down!]

I asked it closed. Please stop making assumptions unless you actually know what happened.