SG1 - placement of robots at beginning of match

as many have noted, the rulebook states that robots can start anywhere on their side of the field as long as they are contacting the field wall that contacts both of that alliances scoring areas. i would like to question how teams can achieve reliability as far as their autons go, because the positioning of the field wall is such a variable, depending on the quality of the setup. some fields have the tabs cut off of their tiles, while others are off center and the sides bow in or out. how can we insure that our robots begin in the same position at the beginning of each match if we are forced to contact a field wall that has a changing position depending on the field that we play in

you could have a bar that flops down to touch the wall to account for tolerances of an inch or two. just keep it in 18x18x18 and your good.

This is something that I was thinking about as well, but the more I think about it, the more I don’t see it as a problem. Although I believe it is a useless rule, I do not think it will cause too much variability in autonomous. Most of tournament fields are relatively similar when it comes to wall placement, so for a corner of the robot to be touching the wall is not a huge deal, although if there is something that concerns you about any certain field, I suggest talking to the manager of the tournament.

that was my idea, then i remembered the rule about remaining within 18 x 18 x 18 without help from a field element in order to pass inspection and such, but i’ll figure something out.

true that. ig my autons will just have to be perfect, so that a bit of variation won’t affect them. thanks for your help, and thats a good point, i can always talk to the tournament managers.

I’ll put an image of the field setup and SG1 for people to see what you’re talking about. 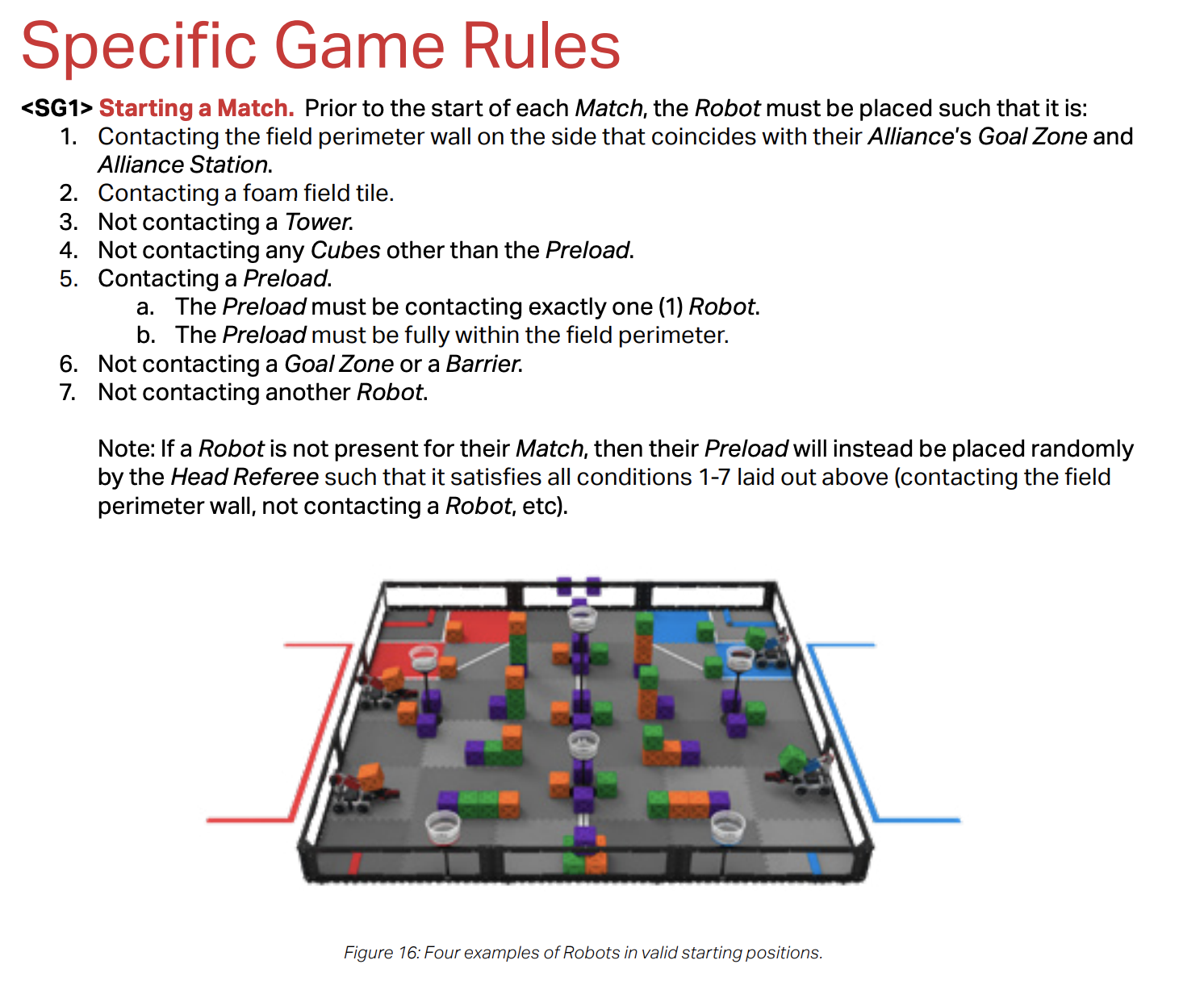 It’s important to note that you don’t need to start on a colored tile in autonomous. Because of this, I think it is a good trade off. The rule exists basically so you don’t start your robot off in the middle of the field but you can also start anywhere along the perimeter within your section of the autonomous line.

With that being said, I’m curious to know what kind of autonomous strategies people come up with. I’m gonna say it’s too early to begin an autonomous plan considering most people don’t even have a design, much less a tangible robot to use. But, it would be interesting to hear what people have to say about autonomous strategy. I have a few ideas in mind.