So, if a ball is shot from one side of the field into another goal on the other side during auto, it wouldn’t be touching the foam tile. So is this still considered a violation of , or is it completely legal?

It is illegal because it is accomplishing something that a robot would not be allowed to do, which is touching opponents goals during the autonomous period.

Next question, what if you do it with a ball that is on the autonomous line, since it is not on either side?

Wait I read ur question wrong. It’s 100% illegal cause u can’t interfere with ur opponents auton in anyway. For example, if u took the third slot in a goal that they’re ere going to use, it would be illegal

You cant inte tonally commit a violation, meaning balls along the middle wouldn’t work either 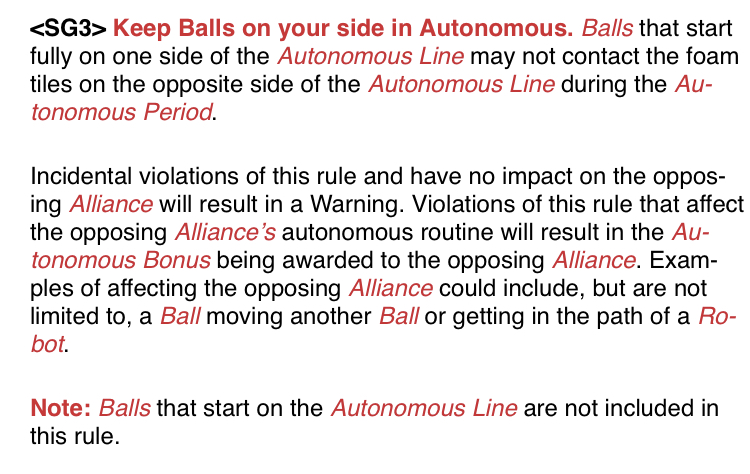 My only thing is, it basically says disregard the rule for balls on the line.

SG3 only says balls on the auton line are exempt from the rule about going on the opposing alliance’s side.
Rule SG7 prevents you from using a ball to do something illegal, so my interpretation is that you cannot shoot a ball, even a auton line ball, across the field and score, because if your robot were to do that it would be illegal.

The rule only says that balls cannot contact the foam tiles on the other side, that means that if you actually scored on the other side without missing you would not be in violation of SG3. Also it does say that the balls that start on the line are exempt from this rule so you could use those balls to potentially block the other teams autonomous without violating any rules, at least as I interpret it. This seems like a good question for the Q and A when that opens up.

This seems like a good question for the Q and A when that opens up.

No - read the rules carefully - <SG2> applies - your robot, or by extension using balls to achieve a purpose that is illegal, you may not contact opposing alliance goals

You need to let robots of the opposing alliance do their thing during Autonomous mode without intention interference.

the action of contacting the opponents home row is not really the objective of scoring across the field. I think the rule is intended to prevent robots from stretching over the line and descoring the goals somehow. however with the intention of scoring in the opponents goals I think that there are no violations because the action is considered offensive and not defensive or destructive towards the other teams autonomous. It does not violate SG2, SG3, and SG7 has a note which states: "The intent of this rule is to prohibit teams from using game objects as “gloves” to loophole any rule that states “a Robot may not [do some action]”. This rule is not intended to be taken in its most extreme literal interpretation, where any interaction between a Ball and a Robot needs to be scrutinized with the same intensity as if it were a Robot. " and I think that would mean that because the ball is being used for its intended purpose that means that the action of scoring in your opponents home row would be legal. I think.

Good luck with that.

Sorry if this is similar to the other questions, but if you descore a ball from one of the middle goals and that unintentionally crosses the auton line, would that be a violation of SG3 (7)?

and I think that would mean that because the ball is being used for its intended purpose that means that the action of scoring in your opponents home row would be legal. I think.

Ok - less terse response. The intended purposes of balls is to score on your side of the field during autonomous period of a match. Your reasoning may be flawed.